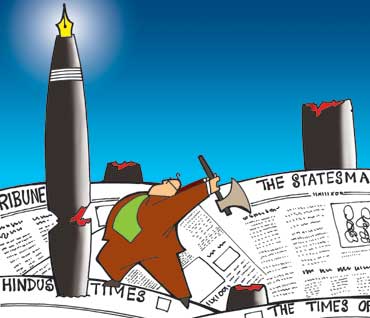 The scenario changed with the spread of TV. People who saw events take place before their own eyes could not be bothered to read about them in the papers next morning. Fewer and fewer people read editorials. Proprietors of newspapers sensed that editors were dispensable as they and their business managers could better meet the challenges posed by the electronic media. All it needed was to fill their pages with pictures of scantily-clad starlets or models, recipes for exotic foods, vintage wines and gossip. The formula could be summed up in four Fs: films, fashion, food and fuck editors. Many notable pen-pushers fell victim to the fourth F: Frank Moraes, Girilal Jain, B.G. Verghese (Magsaysay award winner), Arun Shourie (another Magsaysay awardee), Vinod Mehta, Inder Malhotra, Prem Shankar Jha. Today if you ask who is the editor of the Times of India, the Hindustan Times, the Telegraph and the Statesman, nine out of ten will plead ignorance. As for Dilip Padgaonkar, you may well get the reply in a counter-question: "Dilip who?"

The hard truth about Indian journalism is that proprietors matter, editors do not; money counts, talent does not. The latest instance of money trashing ability and experience is the unceremonious sacking of M.J. Akbar, founder-editor of the Asian Age. He is perhaps the most distinguished living member of his tribe. He started the weekly Sunday and the Telegraph for the Ananda Bazaar group of papers based in Calcutta. He has been elected member of the Lok Sabha and is the author of half-a-dozen books, all of which have gone into several editions. Fifteen years ago, he, with a set of friends, launched the Asian Age. It was a bold venture as the Asian Age came out of all the metropolitan cities of India as well as London. It had little advertising but had a lot more readable material taken from leading British and American journals than any other Indian daily. It was as close to being a complete newspaper as any could be. Besides these unique qualities it also published articles by writers critical of the government and the ruling party. It was probably this aspect of the journal that irked Akbar's latest partner in the venture; he had political ambitions of his own and wished to stay on the right side of the government. So without a word of warning, on the morning of March 1 while he was on his way to office, Akbar learned that his name was no longer on the Asian Age masthead as its editor-in-chief. It was an unpardonable act of discourtesy committed by someone with less breeding and more money.