A cable strike in Pakistan? Well, it came about because banned Indian channels are the lifeblood for operators. 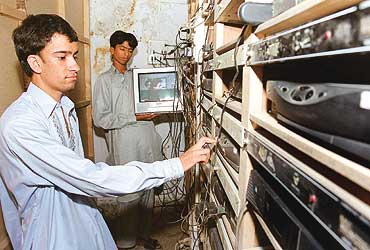 outlookindia.com
-0001-11-30T00:00:00+0553
It was a form of protest quite unique to Pakistan. When thousands of television screens blanked out last Sunday (August 24), it was the Cable Operators Association's way of telling the Pakistani establishment that it had gone too far in guiding citizens on what they could watch or what constitutes "clean and healthy entertainment" on TV. The COA was essentially protesting against the government ban on cable operators offering a bouquet of Indian channels, from news to entertainment programmes, all very popular here.

When the association issued a nationwide strike call, it had wanted to only plug out Pakistan's private TV channels, believing they were tapping their formidable clout to stamp out competition for eyeballs from across the border. But local cable operators were so furious they blanked out government channels as well.

COA's protest was also fuelled by economic compulsions. Points out Chaudhry Imran, its general secretary: "The ban is seriously affecting business as viewers are discontinuing cable subscriptions when they do not get popular programmes in their language." The COA was also emboldened to protest because of the recent thaw in Indo-Pak relations and the warm reception the Indian parliamentary delegation received here a fortnight back. Says Md Saddiq, a local cable operator in Rawalpindi: "With the recent peace initiatives, we felt it was time for the government to reverse the ban it had imposed earlier."

But the empire was quick to strike back. Officials from the information ministry justified the ban claiming Pakistan TV (ptv) was proscribed in India, a misconception the Pakistan government has deliberately promoted. But for Gujarat, ptv is freely available in India. The subtext of their arguments was: look, at stake is national security, that to promote entertainment from the 'enemy' is the ultimate sin in the land of the pure.

Other forms of pressure too were brought upon the COA. Unknown organisations like the Pakistan Media Movement inserted ads in the media asking, "Threatening to block Pakistani channels in protest against not being able to show Indian channels? Most Pakistanis like us are left quite confused. Where do the operators' loyalties really lie? Just in case they have lost all perspective, Pakistan should indeed always come first."

For ordinary citizens, though, entertainment had a better billing than national security. With letters from readers flooding newspaper offices, mostly pleading for sanity and the right to choose what they wanted to view, the government sought to buy time by holding out assurances and going into talks. The strike was temporarily called off three days later, though the ban on Indian channels still remains, in utter disregard for nearly 30 million TV viewers.

Underlying the ban is also the government's attempt to save the state-run TV channels from economic collapse. Without the will or the courage to face competition in an arena which has no borders, the government perhaps thought protection can be best offered by knocking off what is popular. Explains an official from a cable house: "These so-called Indian channels with a huge audience attract a major chunk of advertisements, leaving the local ones with a smaller slice of the cake. Local channels can survive only through political manipulation. ptv's earnings have come down to Rs 2 billion from nearly Rs 3 billion."

But he says the government's policy of protection will not only deprive Pakistanis of entertainment but also hurt the interests of many. "Over 2,00,000 families are linked to the cable business which has an investment of over Rs 10 billion. Can the government deal with so many stakeholders through a ban?" asks the official.

Reactions to Indian channels are mixed not only in the conservative province of the North West frontier. Even ex-minister Mushahid Hussain had proscribed his son from watching Zee TV. "He wasn't allowed to watch dance and music sequences because they are graphically vulgar and offensive and far removed from our culture," says Hussain, adding, "But I'm against imposing the ban for political reasons. As information minister, I resisted a ban on Indian television channels during the Kargil episode. I feel Pakistanis are mature enough to decide for themselves what is propaganda and what is reality."

But Naheeda Khan, a housewife in Rawalpindi, feels the government is hypocritical in targeting Indian channels for not providing 'clean' entertainment. She asks: "What about Baywatch? Not much is left to the imagination. Is it nearer to our culture than serials on Indian channels? For many of my friends, the Indian soaps were great fun. We had become addicted to them." A recent editorial in The Daily Times, Lahore, echoed her feelings: "The state of Pakistan is becoming intolerant.... The government is not helping by gagging cable TV and starving the population of entertainment in the name of dubious 'purification'."

Last week's protest also underlines the reversal of roles. Not too long back, Indians used to purchase video cassettes of ptv dramas. But by sanitising entertainment programmes, and refusing to adjust to changing tastes, the government has, in a way, pushed Pakistanis to buy CDs and cassettes of Indian soaps they cannot watch now. As Pakistanis instal dish antennas and buy decoders, the establishment seems to have remained ignorant about the power of modern technology—it recognises no borders and enables people to watch what they want. 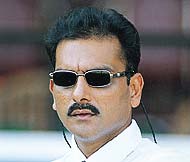