Has just-divorced actor Aamir Khan sprung for an English rose? 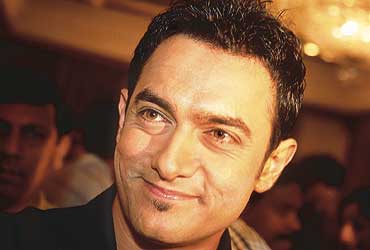 outlookindia.com
-0001-11-30T00:00:00+0553
He's India's hottest star, with global ambitions after the blockbuster success of home production Lagaan. She's a lowprofile film researcher from London who's besotted with Bollywood. And if the buzz is to be believed, the recently-divorced 38-year-old Khan and thirty-something Hines are an item.

The Khan-Hines romance has become the biggest talking point in Bollywood these days. Who is this young woman who's fallen for the boyish charms of Khan? His 17-year-old marriage to Reena had survived the Mamta Kulkarnis, Pooja Bhatts, Twinkle Khannas and Juhi Chawlas. So how did an expatriate film researcher manage to wriggle her way into the actor's busy life?

A "blonde and bouncy" woman is how someone who knows Hines describes her. She's studied religion at London's School for Oriental and African Studies (SOAS) and some seven years ago, she also took a course called 'Cinema and Society in India' with Rachel Dwyer, filmmaker Yash Chopra's biographer. "I became completed obsessed with Indian cinema," Hines told an interviewer recently. "I changed my course around." She finally ended up doing a dissertation on Amitabh Bachchan. Now Hines is writing a biography (no less) of the Big B, commissioned by Bloomsbury, and has reportedly snagged an advance of £30,000. The Big B biography and now the romance with Aamir Khan has brought her to India at least 23 times in the recent past.

Hines, says a Mumbai-based film magazine editor, is the sort of woman you only notice at second glance. "She's sort of girl-next-doorish, casually dressed and extroverted," says the editor, who asked not be named. Hines, who's also divorced, keeps popping up at Mumbai's film dos, often unexpectedly and uninvited. At the release of Dwyer's book on Yash Chopra, Jessica had her "mentor's" eyes widening in disbelief. "Hines was a student of hers at SOAS and here she was stealing the show, with the industry stars present eating out of her hands," says the editor.

In fact, it's believed that before flooring Khan, Hines impressed Bachchan so much that he expressly made himself available whenever she required him for interviews. She was living at the Juhu Centaur hotel, a few minutes' walk from the superstar's house, around the time. Hines met Khan through common friends in Mumbai, possibly when she was working on the biography. "They became very, very close," says the editor. So much so that Khan turned out at a literary festival organised by her in London to recite some poems and sing two love songs. "Jessica, the festival organiser, is an old friend and she asked me to participate," was how Aamir justified his presence. Sources say he also used her help during the casting of Lagaan. Hines suggested some of the names—of actors and British agencies—for the large supporting cast required for the film.

This correspondent ran into Hines at the famed Jogger's Park in Bandra, a Mumbai suburb, around 8 pm on January 7 this year. She was standing pretty much at ease, sipping coconut water from a fruit vendor. When asked whether she was Hines, and whether the picture in the papers (at a film function) was hers, she quipped, "Yes, it was but don't believe all that you read!" Then Hines got into a waiting chauffeur-driven car belonging to Khan and left. She seemed to be quite familiar with the suburb too. And putting two and two together, and after calling up a few sources one realised that Hines had come out on her own because it was that evening of the week when Aamir's kids came to visit him.

These days Hines is living in Khan's Bandra apartment—and refusing to entertain any questions on the affair. "Khan is an emotional lover. When he woos his women, he goes all out writing letters in blood, serenading them with songs. He goes into an emotional low when things don't work out.He has always been an 'all or nothing at all' guy who hasn't learnt to keep a relationship in balance," says a critic who knows the star well. So will the Khan-Hines romance remain giddy and good? Watch this space.

The Land Mine Principle