A tussle between two cricket overlords results in epistolary fireworks 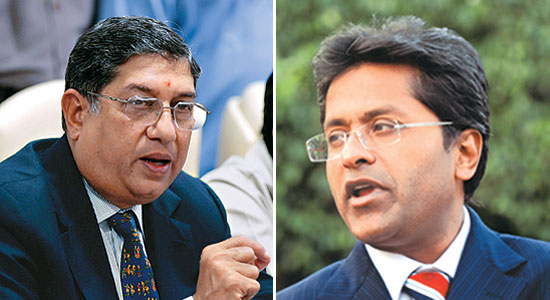 A Fight Of Egos

Pistols or swords? None, actually. The great duel of egos, for the control of the Indian Premier League (IPL), was fought with letters. N. Srinivasan, secretary of the Board of Control for Cricket in India, initiated his latest move to clip the wings of Lalit Modi with a wry missive that bore ill-news for the recipient. But, by the time the dust settled five days later, after frantic spree of letter-writing—10 of them at least, by the latest count—it was Modi who emerged as the victor, provisionally at least.

Beyond the clash of egos between Modi and Srinivasan, there’s also the issue of a corporate takeover of IPL and, subsequently, of Indian cricket. The BCCI, no doubt, itself invited the mighty corporates into its house in return for gold, earning whopping amounts through the sale of IPL teams and TV rights. But it now runs the risk of losing control over the running of IPL. The signs of such a denouement came in the Modi-Srinivasan skirmish—IPL’s different franchises, for the first time, have forcefully disputed a BCCI decision and had their way.

Pawar has made it known that he did not go with the BCCI and its chief, his protege Shashank Manohar.

It was Srinivasan, a strong ally of the current BCCI president Shashank Manohar, who wrote the first letter, terminating the board’s contract with the International Management Group, which conceptualised and executed the IPL. Srinivasan, whose aversion to Modi is well known, cited an implausible reason—the IMG’s refusal or unwillingness to renegotiate its contract to a figure lower than the Rs 43 crore it got for 2008 and Rs 33 crore for 2009.

The termination of the contract, clearly an amateurish, legally uninformed effort, was seen as a blow to the Modi camp, for the IMG has been a close ally to the IPL commissioner. Interestingly, IMG boss Ravi Krishnan was until March 2009 part of Rajasthan Royals, in which Modi has been reported to have an interest. In fact, as has been widely reported, the IPL is largely a club of friends with mutual interests, and often conflicts of interests.

The battle had been on more than one front. Sources say the BCCI, trying to hurt Modi in as many ways as possible, had refused to ratify the charitable endowments he had announced in South Africa during IPL-2. Modi, a BCCI source says, had two choices: submit to the will of his antagonists and persuade the IMG to renegotiate—or fight. “It’s a slap on the face of Modi,” says a senior officer with a franchise. “If he’s upset, he has every reason to be so.”

Modi chose to fight, organising an avalanche of letters in his support. Seven of the eight IPL teams led the epistolary charge against the termination of the IMG contract; the one to not write was Chennai, owned by India Cements, of which Srinivasan is vice-chairman and managing director.

In the unrelenting bombardment by letters from the IMG lines—“Set up at the request/direction from Modi,” says a source in an IPL team—the seven franchises or their owners extolled the virtues of the IMG. In the fight, Modi found quantitative superiority. And qualitative too, for none other than Mukesh Ambani, owner of Mumbai Indians, wrote that he was “personally shocked at the unilateral decision of doing away with the services of the IMG”. Shahrukh Khan of Kolkata Knight Riders also said he was disturbed that a decision that could have an impact on “the success of the league and our individual businesses” was taken without consulting them. Ness Wadia of Kings XI, also indignant, sent across a strongly-worded four-pager.

Sharad Pawar, the Mumbai Cricket Association (MCA) president, forwarded the Ambani letter to Manohar, saying he was “very disturbed” to hear about the termination of the IMG contract by Srinivasan. “Not only will this lead to a prolonged legal battle but it will also show us in bad light in public,” said a clearly worked-up Pawar.

Intriguingly, Pawar didn’t support the BCCI, of which he is the former president, and of which MCA is a key member. “The BCCI does have a case, because the amount of money being paid to IMG is really disproportionate to what they provide us,” a board source told Outlook. Sources in more than one IPL team confirm this. “We would have expected a former president to support BCCI, not IMG, on this. But then, no one fights with an Ambani, unless it’s a government, or if the opponent happens to be Ambani too,” quips the source. “And the elections in Maharashtra are coming up—Pawar would prefer to be with Ambani on this issue in these times.”

On Wednesday, the governing council of the IPL met and authorised Manohar to try to resolve the issue and report to the BCCI at its annual general body meeting later this month. With Manohar recognised as a Pawar acolyte, it would appear that the IMG and Modi are likely to find satisfaction. “Srinivasan, who aspires to be the next BCCI president, like Modi, would likely find that his move has backfired,” says a board source. Srinivasan, while refusing to comment on the events, told Outlook that there’s no animosity between Modi and him, and that he’s acting in the BCCI’s best interests.

One disquieting fallout of the imbroglio, for old-school BCCI members, is that it confirms the mounting influence of the corporate world in its running. Former BCCI chief Jagmohan Dalmiya, though, said it might be a bit premature to say that the corporate world is dictating terms to the BCCI. “It seems that they’ve come to an agreement,” Dalmiya told Outlook. “Let’s wait a little and see the outcome of this. Right now, we can’t say that someone is dictating terms to the BCCI. Only if the dispute continues can we decide what we need to do about this.”

But another BCCI official Outlook talked with is less hopeful and perhaps more realistic. “Their influence will, I think, only increase...it’s a price, I suppose, we have to pay for the increase in our revenues,” he said.

“I’m Not For Monitoring What Is Shown On TV”