Osama has limited escape options; Chechnya is the best bet 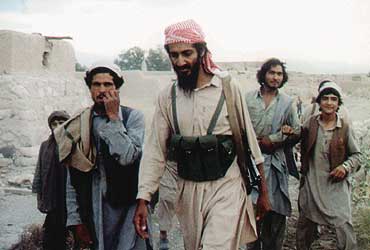 outlookindia.com
-0001-11-30T00:00:00+0553
A spate of reports last week claimed Osama bin Laden had already slipped out of Afghanistan. This is quite unlikely, both because there are no flights out of Afghanistan and travel through the war-ravaged country, with its broken roads and destroyed bridges, would be too arduous for bin Laden, who suffers from a kidney ailment. But suppose he manages to achieve the unexpected and leaves Afghanistan, which country could the fugitive then head for?

Sheer accessibility would make Pakistan his first choice. Here the Taliban has a network of madrassas and a veritable army of those who consider bin Laden their hero. But he will have to rule that out because the Pakistan government, which has now changed its policy on Afghanistan, would be too willing to hand him over to Washington and earn a few more brownie points. But bin Laden could also emulate a group of fanatic Arabs who in 1999 sought refuge with the independent-minded Afridi tribes in the remote Tirah valley in Pakistan's Khyber Agency. But the Afridis soon objected to the presence of Arabs and their religious practices and promptly threw them out. They would now be averse to sheltering a more notorious Arab than his predecessors.

Bin Laden wouldn't want to return to Sudan from where he was ordered out in May 1996. The country is now firmly under the control of President Gen Omar al-Bashir, and he is bitterly opposed to Islamist politician Hasan al-Turabi who could have come to bin Laden's rescue. 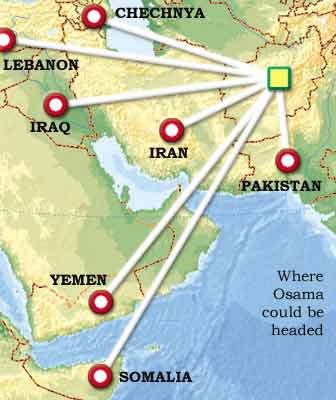 Others feel the fugitive could head to Yemen. For one, the Ladens originally belonged to Yemen before they shifted to Saudi Arabia. Second, the country is home to a clutch of radical Islamic groups who share tremendous ideological affinity with bin Laden. They could risk their own future to host him. But bin Laden's presence in Yemen could have destabilising consequences vis-a-vis neighbouring Saudi Arabia. The Yemenese government simply can't harbour bin Laden and incur the wrath of the Saudi royal family.

Bin Laden's best bet would be to seek the patronage of a government which shares his deep hatred for the US. Saddam Hussein's Iraq, indeed, fits the bill. But bin Laden is opposed to Saddam, having accused him—once even to this correspondent in a 1998 interview—of fracturing the unity of Arabs through his invasion of Kuwait and enabling the US to exploit the situation for placing its troops in the region.

Somalia, too, could be a prospective destination for bin Laden, who has friends among some of its armed militia. But these groups won't be able to protect him once they come under pressure from their rivals or from neighbouring countries acting on Washington's order.

Iran is another possible sanctuary for bin Laden: it is opposed to the US and can be easily accessed from Afghanistan through a land route. But bin Laden's problem is that not only does Teheran distrust the Taliban, the Shi'ite clergy of Iran would also be suspicious of bin Laden because he is a Sunni. Nor would Teheran want to alienate international opinion which has, over the years, shown empathy for its interests.

The Shi'ite Hezbollah guerrillas of Lebanon were reportedly prepared to shelter bin Laden. But the Iranian and Syrian supporters of Lebanon would be opposed to the invitation because this could strengthen Washington's support to Israel and subject the region, itself recovering from a bloody civil war, to unwarranted attention.

Bin Laden wouldn't want to seek shelter with the Abu Sayyaf group in the Philippines, infamous for its kidnapping for ransom and bereft of any Islamist ideology in its defiance of the local government.

Chechnya, indeed, is bin Laden's best bet. Its guerrilla commanders Shamil Basayev and Khattab had invited him to stay in their hideouts. Last year, in fact, an abortive attempt was made to smuggle bin Laden out across the Russian military frontlines to Chechnya. His aides say the fugitive would even now want to go there and preferably seek martyrdom fighting the Russians.