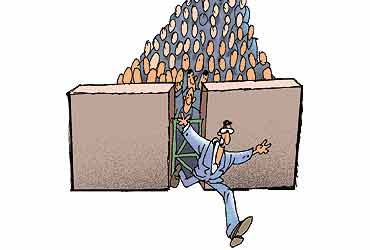 outlookindia.com
-0001-11-30T00:00:00+0553
One out of every 680 men and women who sat for the Common Admission Test managed to squeeze into IIM Calcutta this year. The average figure for the four IIMs that participated in the Outlook survey was one out of 402. That is one number that has "world record" written all over it. And it’s utterly mad.

It means only 0.25 per cent of all those who applied got into an IIM. It means that you can do better in the entrance test than 99.5 per cent of all the people who sat for it, and still not get an admission into India’s top B-schools. It means that just one mark more or less can send you up or down hundreds of ranks and change your life. So aspirants today spend thousands of rupees—possibly even more—on coaching classes, and cram for the test for up to two years, to the exclusion of everything else. I have met people who gave up Infosys jobs with US postings to spend a year at home studying for CAT. The consequence of all this is the competence to crack a particular type of exam, at the expense of general awareness and life skills. This is a common complaint I have heard from professors and alumni who interview candidates and supervise the group discussions. Most interviewees invariably say that their ambition is to be the CEO of a multinational corporation, yet claim that Bill Gates’ Business @ The Speed Of Thought is a novel.

I wonder how many of these MBAs would be able to take unusual decisions when they go out into the world. Will they make interesting choices about their careers and about management problems and their lives? When we got into IIM in the late ’80s, I don’t think we treated it as a life-or-death issue; it would be nice to get in, but we were not going to lose much of our swagger if we didn’t. Just the other day, looking at the careers of our bunch of 13 close friends, 16 years after we graduated, I discovered the diversity of stuff we had done.

One has a top job in a big advertising agency, while one runs his own agency. Three work in Silicon Valley, one of whom once insisted on a demotion because he liked his previous job better. One was a software entrepreneur who managed to sell his company for a gazillion dollars and has returned to India to unhurriedly figure out his next goal in life. Two are bankers, two teach in US business schools, one of whom is also a tireless activist for many noble—and perhaps lost—causes. One cracked the stockmarket open wide enough to now live by investing. One is a senior policeman and one a journalist. I wonder how many of today’s MBA students, who have been under such tremendous pressure from their parents and their environment to get into an IIM at any cost, would follow anything but the straight and narrow corporate path. The path that is Given.

The IIMs should take in more students. Of course, exclusivity of the brand and the education must be maintained because quality must have a hierarchy. But 400-to-one exclusivity goes far beyond being Brahminical. It’s like being the Illuminati or something equally absurd. The six IIMs take around 1,200 or so students every year. The number could easily rise to 5,000 without sacrificing student quality—how much difference is there between the person who scored 99.8 out of 100, and 99.1?—or chipping the exclusivity tag. Harvard Business School takes in about 700 a year, and the applicant-to-student ratio is about 13 to 1, with no effect on brand status.

The simple truth is that the societal pressure to get the IIM stamp, the ridiculously low intake and the consequent distortions could have worrying long-term effects. The possibility is distinct that IIM graduates, who, among the alumni of all Indian institutes of higher learning, are in a position to take the maximum risks, could end up the most risk-averse. As things stand even now, while the IITs have produced hundreds of successful entrepreneurs, the IIMs’ record in this area is quite poor. IIM graduates make profits for other people who take the risks. Nothing wrong with this, but it leaves me a little sad.