With Ashok Kumar, a little bit of laughter has gone out of Bombay cinema, says Waheeda Rehman 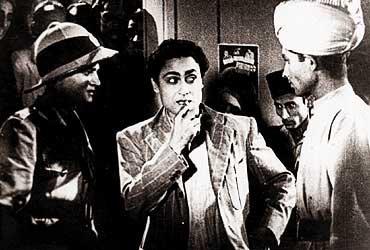 outlookindia.com
-0001-11-30T00:00:00+0553
I have fond memories of Ashok Kumar. I worked with him in Rakhi and Zindagi Zindagi (opposite Sunil Dutt). But technically, we worked together only in Rakhi where I played his sister in a film about sibling relationship. In Zindagi Zindagi, we didn't have any scenes together. I remember that the very first scene of Rakhi required me to tie a rakhi on Ashok Kumar. Just when we were about to begin the shoot, he asked me if I had any brother. I replied that I didn't have any and that I always pined for one. "From today you will tie a rakhi on me every year on this day," he replied. But I didn't take it seriously, dismissing it as one of those impulsive statements.

It so happened that the next year, a few days after Raksha Bandhan, I bumped into him at a party and immediately after seeing me, he asked: "What happened?" I was confused and did not know what was he referring to. "I was waiting for you on rakhi day and you never turned up," he answered, seeing my bewildered expression. "Come on, don't joke, you didn't mean it!" I answered. "Of course I meant it. You have to tie rakhi on me and do it right now," he shot back. I didn't believe it, and tried to wriggle out of the situation: "How can I do it here at the party? In any case, I am not carrying a rakhi with me." But he was adamant: "I don't care. If you really love and respect me, then you must do it."

I realised there was no use arguing with him on this and asked the hostess for something to tie on his wrist. But he had objections on that too: "You cannot take anything from her. You have to do it!" Once again I tried to laugh it off saying: "Ashokji, you don't want to have a filmi drama here, do you? You surely don't want me to tear off my pallu and tie it on you?" Obviously he didn't but he had other options: "There's something around your neck which you can tie!" It was a silver chain I was wearing and he ordered me to take it off and use it as the rakhi in front of all the guests. After he had his way, he didn't forget to give me some money as is customary. "From now on, you will come and tie a rakhi and have dinner with me every year. And I mean it!" he replied in a stern but loving tone.

Of course, that didn't always happen because we were both so busy with our own schedules. But I always made sure to call him up on Raksha Bandhan and wish him. And every time he had the same complaint—that speaking on the phone was not enough and that I must visit him to collect my rakhi money and eat with him. I remember visiting his house once because his wife had made some excellent Bengali food.

Ashok Kumar was a fine actor, a lovely man and a great dramabaaz! Everyone called him Dadamoni but I was one of the few who called him Ashokji. He loved to act and used to dramatise everything. One day during Rakhi's shooting in Madras, I remember him telling me that his back was hurting. "Climb on my back," he sort of ordered me. Imagine doing it on the sets! "How can I do that Ashokji?" I asked, but he insisted: "Arre bachchi ho, Come on do it. It's really paining." Once again he had his way and made me stand on him and press his back. He went away satisfied and called me up from his hotel room later in the day: "You know what, I'm not going to shoot for three days because they have given me this huge scene and I can't memorise the dialogues. You go and take a holiday if you like. Go off to Kodaikanal or somewhere near." I was aghast: "You can't do that. How will I explain my absence to the producer?" But he was pretty cool about it: "Just tell him that I am not well." I refused: "I cannot do that on your behalf!" He insisted: "Anyway, don't worry. I'm certainly not shooting for three days. Take it as your holiday." I laughed: "You're such a crook." "Of course I am. But what can I do? They change my scene at the last minute and I can't learn these long dialogues," he replied.

Several years later, after I got married and settled in Bangalore, I paid a visit to his house in Bombay with Nanda and Helen. "Why have you come?" he asked us. He wasn't convinced when we told him that it was just a casual visit and thought there was something more to it. "I am sure all of you want some homoeopathic medicine from me?" It took us a long time to convince him that it was just a courtesy visit, and that we all wanted to meet him because we'd worked together at some time or the other in our careers. What followed was one of the most sumptuous treats to Bengali food I have ever had.

That was the last I saw him—about eight years ago. We didn't meet much but I have always felt his affection for me. Indeed, he was a lovely human being.