Home  »  Magazine  »  National  » Opinion  » opinion »  Every Man To The Superstructure

Every Man To The Superstructure

After a spell of perversity, the Left has to retake its path of idealism 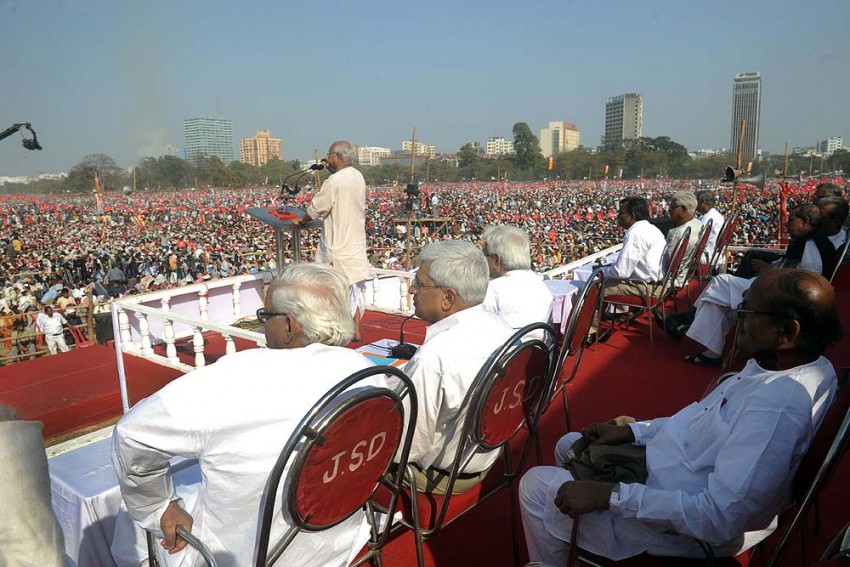 SANDIPAN CHATTERJEE
Sumit Chakravartty May 26, 2014 00:00 IST Every Man To The Superstructure 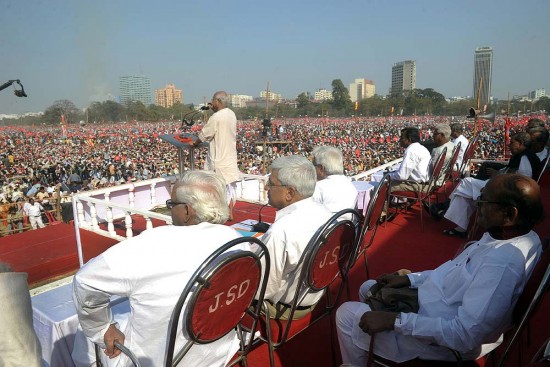 Whither the Left? This question comes up time and again during discussions on Indian politics. And it has assumed more importance now, when an epoch-defining general election unfolded with a conspicuously minimal presence and influence of the Left parties; indeed, what we witnessed is a complete and unprecedented marginalisation of the Left.

Contrast the present position of the Left with its standing soon after Independence. After the first parliamentary elections in 1952, the newly constituted Lok Sabha had the Communist Party of India (CPI) as the main Opposition and not the Krishak Mazdoor Praja Party (KMPP), as was widely anticipated. Not only that, one CPI leader, Ravi Narayan Reddy, hailing from Telangana, secured the lar­gest number of votes in India (more than the then PM, Jawaharlal Nehru). That was because the people of Telangana stood solidly behind the Communists despite their somersaults. Why? Because CPI workers and leaders were held in high public esteem due to their selfless sacrifice and dedicated service to the cause of the common people, particularly during the struggle against Nizam’s misrule. This was true also in West Bengal, which had witnessed the historic Tebhaga struggle of peasants. In Kerala, the memorable Vayalar-Punnapra movement bro­ught the Communists so close to the masses that in 1957, with its dramatic assumption of power in Kerala through the battle of the ballot, the CPI became the first Communist party in the whole world to win provincial elections and form government without having to resort to armed struggle.

The Left suffered a serious setback in the sixties, with the first major split in the Indian Communist movement due to the ideological schism with regard to the attitude towards the Nehruvian state against the backdrop of the Chi­nese aggression of India in 1962. Thereafter the new party, the CPI(M), met a similar fate with some members adopting a Left extremist line, quitting the party in the wake of the 1967 Naxalbari revolt in north Bengal. The CPI and CPI(M) are currently organising joint actions no doubt, but reunification of the two formations remains a far cry. Bringing back the splintered Naxalite groups into the party too is not on the horizon.

Nonetheless, the areas where the party had struck roots in the pre-Independence period saw mass struggles consolidating the Left’s position among the people. The formation of United Front and later Left Front governments in West Bengal helped to strengthen the people’s democratic aspirations. One of the lasting achievements of the Left in power in the state was the registration of sharecroppers among the peasantry through what was popularly known as Operation Barga. The holding of periodic elections to the three-tier panchayat system also provided ample testimony to the Left’s resolve to foster and promote grassroots democracy. In Kerala too, the Left Democratic Front’s assumption of power at varied times ensured that major strides were taken to alleviate the conditions of people at the lower rungs of the socio-economic ladder with the help of the innovative People’s Plan concept, which perhaps could have been emulated with profit in West Bengal as well. But that was not to be. Instead, the hegemonic ambitions of the CPI(M), the largest Left constituent in both West Bengal and Kerala, gave rise to a form of entrenched ‘partycracy’ that curtailed democratic functioning in large measure.

It’s for the Left to restore the Nehruvian consensus on self-reliance, non-alignment and socialist pattern of society.

A seemingly irreparable damage to the Left’s credibility came in 2006-07, with the Left Front government in West Bengal handing over prime agricultural land to corporates for a pittance without any dialogue with the affected peasants facing displacement and loss of livelihood. And this was done in the service of ‘development’, which stemmed from the same policy of neoliberalism as is in vogue in the rest of the country. Naturally, it led to a massive backlash, as in Singur and Nandigram, for which the CPI(M) leadership heading the Left Front was least prepared. The party’s pro-corporate approach came hand in hand with ‘practical’ steps to brutalise the polity (reflected in savage attacks on common people, as also former party members, articulating differing views in Garbeta and Keshpur in West Bengal and Onchiyam in Kerala) and manifold activities to establish its hegemony. If this was the primary cause for the party’s alienation from the masses after a 34-year rule in West Bengal (resulting in the LF being voted out of power in 2011), in Kerala, the internecine quarrel between the dominant faction and its opponents in the state’s CPI(M) weakened the party and affected its standing among the people. Till date, there is no visible sign of any rectification campaign by the party that could start to restore the people’s confidence in the Left.

A question is frequently posed before  Left leaders: why did they allow the Aam Aadmi Party to occupy the Left’s position in different parts of the country, especially in Delhi and its environs? The AAP is not a leftist organisation. Its ideals and approach are quite different from those of the Left parties but it was able to build livewire contacts with the masses, understand the problems faced by the aam aadmi and launch movements—in short, seize the day—as the Left used to do in the past. In this exercise, it naturally came in direct conflict with the corporates’ rapacious, exploitative operations and consequently it initiated spirited anti-corporate movements. In contrast, the Left by and large confined its activities to issuing statements.

Of course, leftist trade unions mobilised all other trade union bodies on the mounting problems of the working classes—but there was a sameness to the strategy, and the gap with the vast unorganised sector remained.

Nevertheless, it must also be mentioned that some sections of the Left, the CPI in particular, are joining movements with independent leftist forces against the multinational and corporate takeover of land (as by the South Korean steel giant POSCO in Orissa’s Jaga­t­singhpur). The CPI is also in the forefront of the tribals’ struggle for survival, livelihood and self-assertion, braving the combined assaults of the government and corporates in Chhattisgarh’s Bastar region, while steering clear of the Maoist depredations which frequently prove counter-productive in the long run. But much more needs to be done. And in that exercise, it is imperative for the Left to evolve an alternative paradigm of development so essential in the present scenario—one that is witnessing the Congress’s electoral decimation due to its unquestioned pursuit of the new economic policies dictated by the international lending institutions. It is for the Left to restore the Nehruvian consensus on self-reliance, non-alignment and socialistic pattern of society, abandonment of which by the ruling Congress has brought the country to such a pass.

While doing so, needless to underline, it must renew the pledge to uphold the ideals, principles and values of secular democracy that had struck deep roots in the course of the freedom struggle. This is especially essential now when these, enshrined as they are in the Constitution, are coming under incessant attack from the fissiparous forces that are poised to enter the portals of power.

However, the bottomline is to restore the Left’s credibility among people who are moving towards the AAP, which is a melting-pot of impulses. Restoration of lost credibility is indeed an uphill task, but that arduous task must be undertaken in all sincerity if the Left is to regain its past position and standing in national politics.

Sumit Chakravartty is the editor of Mainstream

The View From Hereabouts