Every Drop To Drink 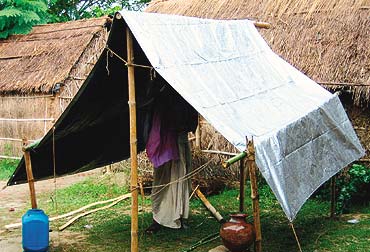 Launched in north Bihar, the campaign was an attempt to convince people to practice rainwater harvesting. A group initiative launched by four NGOs—Samta, Kosi Seva Sadan, Gramyasheel and the Gogardiha Prakhand Swarajya Vikas Sangh—it was brought together by Eklavya Prasad, who believes in natural resource management. He says "Till now, there has been no effort to equip villagers with skills for using local resources. Most of the intervention is concentrated on providing external conveniences to people. This has made them completely dependent on the state."

The Delhi-born Prasad first identified the fundamental problems in flood-prone north Bihar. The state-built embankments near rivers did little beyond providing an elevated area for people to shift to during floods. But with humans and livestock under the same roof and in the absence of proper health and sanitation facilities, villagers had to endure inhuman conditions three months a year. Access to safe drinking water has been an annual problem during monsoons.