'Every Day I Passed By The Hangman's Noose'

Move over Veer-Zaara, the new Romeo-Juliet pair from Pakistan promises to take over, with the release of Benazir Bhutto's husband after 8 years of captivity. 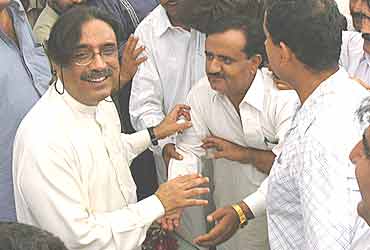 What was your reaction at the announcement of the bail?
I was ecstatic and shouted Allah O Akbar (God is great). I tried to ring up Bibi (Benazir Bhutto) but before I could get to her, my lawyer Babar Awan was on the other line telling her, 'Bibi, bail ho gaya.' It was the prerogative of the husband and the prisoner to get to her first!

Nobody thought you would last even one year in captivity. What made you go on for eight long years?
You forgot the 28 months I had spent in jail earlier (in 1990, under the Sharif government). Being put behind bars time and again did not surprise me. This prospect stared at me at the time I got married to the daughter of Zulfiqar Ali Bhutto. He was General Zia-ul-Haq's opponent. What else could I have expected from hostile regimes other than this treatment?