Every Breath A Stranglehold

Bhopal’s night of December 2, 1984, recounted by a foreteller 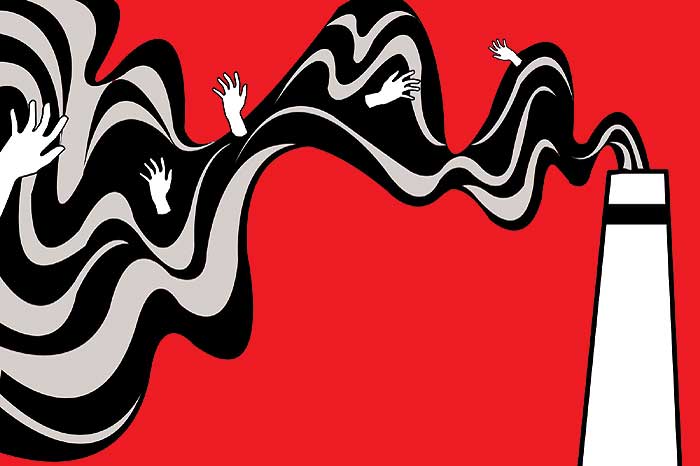 I was then a resident of old Bhopal, just a couple of kilometres from the Union Carbide plant. Around midnight on December 2, 1984, after finishing a story for The Sunday Observer, I went to bed. Before I fell asleep, I felt a sharp pricking sensation in my throat. I thought I was going to catch a cold. But a few minutes later, I was coughing and had difficulty breathing. I then heard loud sounds from outside. Looking out of the window, I saw people running. And then I smelt a very strong, foul odour. I moved back to the bedroom to find my wife coughing too. I realised there was something terribly wrong. I immediately shut the windows and switched on the fan in spite of the December chill. I asked my wife to sit under the fan and called the police control room. When someone responded, I could hear him gasp for breath and cough. “What’s happened?” I asked. “Sahab, Union Carbide ki gas tankee phoot gayee hai. Dam ghut raha hai. (Sir, a Union Carbide gas tank has exploded. I am suffocating).” He barely managed to speak in between bouts of coughing.

So it has actually happened, I told myself. Had my prediction come true? I first wrote about such a probability—of things going horribly wrong at the plant—for a local weekly magazine, Rapat, in September 1982. Then I wrote another piece on it for Jansatta, which ran with the headline ‘Bhopal jwalamukhi ki kagaar par (Bhopal on the edge of a volcano)’. No one listened to me then, and today everyone, it seemed, was going to die. Me too? Never before had I felt so gripped by panic. I looked at my wife, who was speechless with fear. Like me, she also knew about the deadly gas.

Within seconds, the fear of death was overpowered by a stronger feeling—the urge to help people who still had a chance to escape. I picked up the phone and called my friend N.K. Singh, who was then the Indian Express correspondent. He lived far from where I was, in new Bhopal. “Run,” I implored him. “Gas is leaking from the plant. My time is up, but you still have some. Run for your life.”

No one listened to my warning in news reports I wrote in 1982 saying there was a chance of things going horribly wrong at the Union Carbide plant.

He insisted I should try and reach his place, which was so far unaffected. But I had already resigned myself to fate. I made two more calls warning my friends. But my wife shook me out of this spell of activity and reminded me of my parents, brother and sister, who were all sleeping in another room. All four of them were in bad shape when I reached their room. My brain then suddenly began to work. I asked them to move out with wet handkerchiefs over their noses. We had two scooters. I asked my younger brother to take our parents on his two-wheeler and move away from the plant towards new Bhopal. My wife, my sister and I left on my Lambretta. I violated my own instructions and rode towards the plant, only to be warned by the crowd moving in the opposite direction. I turned around and rode towards Idgah Hills to my friend Rajendra Babbar’s place.

My family and I somehow survived the killer night. But we still suffer from lingering health problems. On that night of horror, there was complete chaos. The administrative machinery had come to a standstill. People did not know what to do or where to go to save themselves. They blindly followed one another without knowing where they were headed.

On December 12 that year, Arjun Singh, then the chief minister, announced that another 15 tonnes of methyl isocyanate still remained in the plant. The only option to clear the stock, he said, was to restart production in the plant and use up all of the huge residuum of deadly gas. The government proposed a new operation named ‘Operation Faith’. But people had already lost faith in the government by then. Their faith had left them with nothing but the lifeless bodies of their near and dear ones. By December 14, when Operation Faith was launched at the plant in the old city, lakhs of people had fled from Bhopal to their villages or to other cities to save their lives.

(As told to K.S. Shaini. Keswani was the first journalist to warn of disaster from a gas leak at the Union Carbide plant.)