This time the million mutineers have the demon by the horns and they won’t let up until the fire in their bellies has purged “the corrupt system”.

About a kilometre from Ramlila Maidan, Anna topi-covered heads and tricolour-painted cheeks are already milling around. As one draws closer, past the busy paapad and chaat vendors, OB vans and what seems like a placard-bearing multitude, the carnivalesque atmosphere is palpable. Once through the gates, the loudspeaker speeches, impromptu mini-processions and tens of thousands of fists in the air coalesce into one amorphous presence; a united voice of protest. Men and women—young and old, in groups or alone, chanting aloud or simply listening, cleaning the slush or distributing water, camping overnight or on daily visits, carrying children on their shoulders or explaining the Lokpal juggernaut to curious foreigners—wear their impatience ‘with the way things are’ on their sleeves. The symbolism of the venue—a maidan that’s traditionally hosted countless celebrations of good prevailing over evil—hasn’t escaped them. This time they have the demon by the horns and they won’t let up until the fire in their bellies has purged “the corrupt system”. The Outlook team met some of the million mutineers to hear their stories, understand this ‘I am Anna’ movement from within. 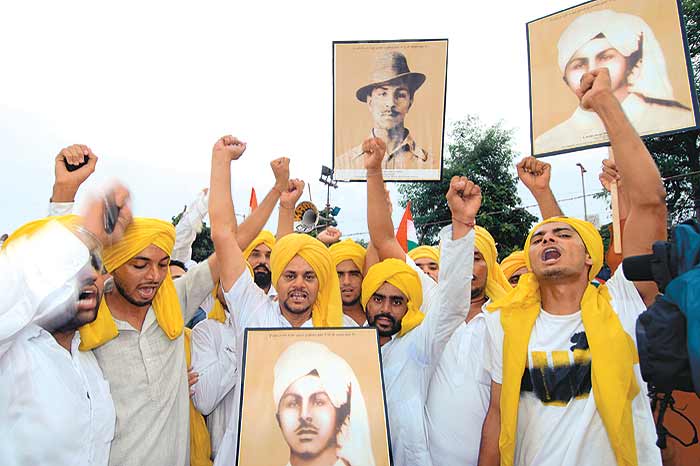 A Second Struggle For The Martyrs

A sea of yellow turbans brightens the drenched Ramlila Maidan on a rainy Tuesday like mustard fields beside a dusty highway. The turbans belong to a group of 300-odd Sikh gentlemen from Punjab who’re here to join the “second freedom struggle”, led by Bhagat Singh’s nephew Abhay Singh Sandhu and Sukhdev’s nephew Bharat Bhushan Thapar. “We chose to wear basanti-coloured turbans because it symbolises Bhagat Singh and represents our own struggle for freedom,” says Jagtar Singh, a TV comedian from Mohali. The group comprises a mix of artistes, farmers and young students from Chandigarh, Patiala, Ludhiana, Bhatinda and rural pockets, and they want to highlight the rampant unemployment among the youth and corruption in property deals. The rain was no dampener as they held up cardboard plaques of Bhagat Singh and Sukhdev, drawing parallels between the “two freedom movements”. Hazare’s attack on state corruption rings a bell with a group member, Gyan Singh: “Getting property registered is a big problem in our area...you can’t without paying a bribe. Add to that rising fuel prices and dipping rates for our farm produce and it’s getting tough.” The students are equally indignant. “I’m unemployed despite having an MBA degree. You can’t get a job unless you grease palms. The government isn’t taking unemployment seriously,” says Puittar Singh, in his early 20s. It’s another yellow turban rebellion in the making. 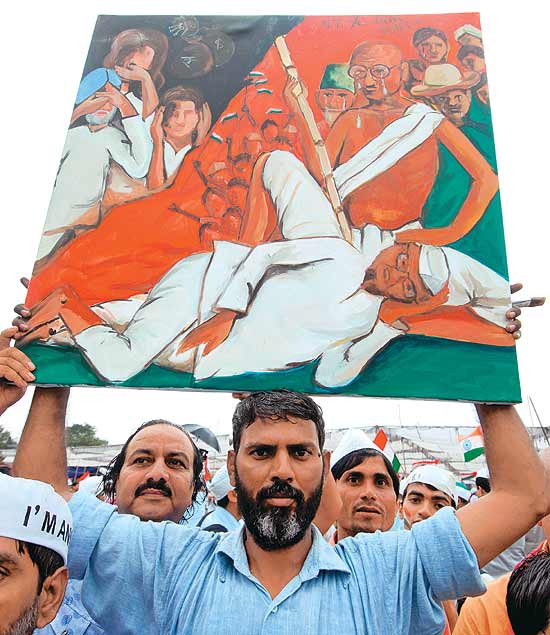 Never in his life has Mohammad Tabrez Alam felt more inspired. Camping at the Ramlila Maidan since August 16, this self-taught artist from Gaya has been painting his impression of the anti-corruption movement on a different canvas each day. Everyday, he threads his way through the milling crowd, holding a freshly painted canvas aloft, pausing to explain the symbolism and posing for mobile phone cameras. So far, his tally of art works—each takes about four hours to complete—stands at 14. His themes are just as varied. On Janmashtami, for instance, his painting depicted a benign Krishna blessing Anna in an effusion of light, which merged with rays emanating from the stars and crescent symbolising Ramzan. In opposition was a likeness of Manmohan Singh, crushing a broken Ashok Chakra under his feet. If the number of curious onlookers around Alam’s easel is anything to go by, his art successfully captures both the colour and the mood on the ground. “Many people have offered to buy my paintings, but I don’t want to sell them. Mujhe exhibition lagana hai, Anna ko dikhaoonga,” he says. With that in mind, Alam is determinedly building a stock of paintings, letting nothing deter him. Not even the cost of putting it together—each piece, including the canvas and boxes of acrylic paint, comes for about Rs 1,000. Alam, though, refuses to put a price on his efforts. “Of course, if anyone wants to help, it’ll be more than welcome,” he says. 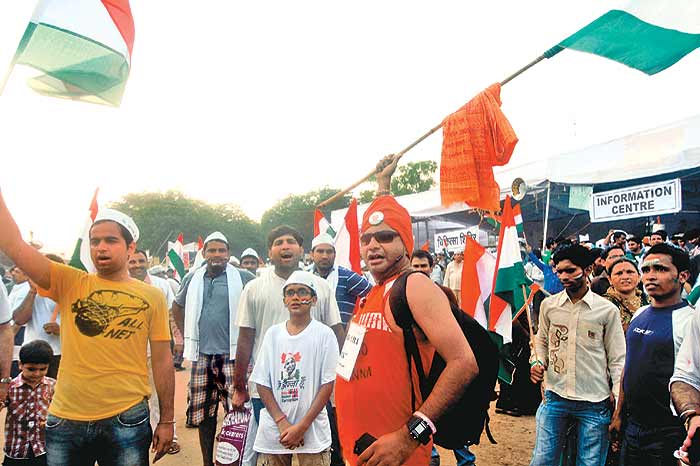 Saffron robe, check. Rudraksh beads, check. Earphones and futuristic watch—yes, you heard that right. This ain’t your regular Baba. Doing the rounds of the Ramlila ground, ‘Technobaba’ hopes his little sartorial gimmick will draw attention to a demand he has voiced in his personal space over and over again—“Take technology to rural areas.” Working in a BPO in Delhi, Technobaba (he wouldn’t reveal his real name) hails from Sardhana, Meerut. He says it was the lack of good institutes in his hometown that made him seek a seat in a Delhi college after Class XII. “But I didn’t get admission thanks to the quota system and backdoor admissions, and enrolled for a correspondence BCom course.” Another correspondence course got him an MBA degree. “Why doesn’t the government open good institutes offering free education in rural areas?” asks the 33-year-old, the youngest son of a government schoolteacher. Another cause close to his heart is the lack of jobs outside the cities. “I live here in Delhi paying a rent of Rs 6,000 for a pigeon coop when my ancestral house in Sardhana has 24 rooms. Would I need to struggle like this, had there been good institutes or proper jobs in my town?” Technobaba’s costume is also a comment on the proliferation of godmen in the country: “There are so many babas around and we all know what they’re doing. I’m a baba with a difference!” And the headphones? “Oh, that’s just part of my get-up,” he smiles. 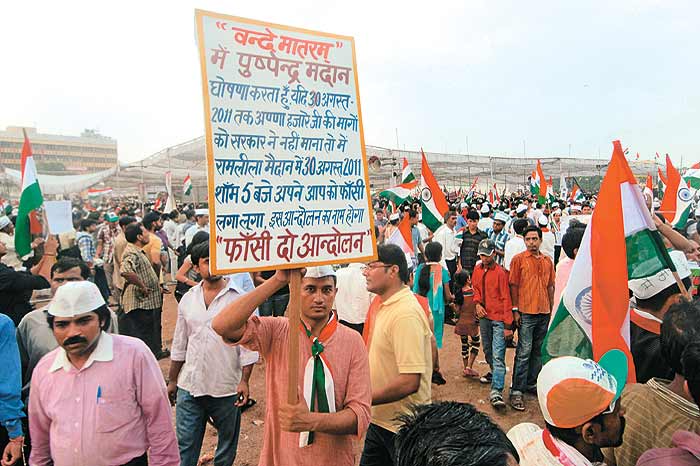 A Cause Worth Dying For

The protest ground is littered with people holding their own pick-me-up placards, each aimed at the TV crews and photographers. But Pushpendra Madan’s has got to be one of the more dire ones, with a threat to kill himself if the Jan Lokpal bill is not passed as law by August 30. The man says everyday corruption has pushed him to this precipice. Giving us just one instance, Madan says the regional transport office in Meerut, his hometown, has made it next to impossible for him to acquire a driving licence. “The prescribed fee is Rs 88 but it needs several visits over a month, something I cannot do as I live and work in Delhi. But if you pay the touts Rs 1,000, you get your licence in just a day,” he adds. A former armyman, Madan says he represents no organisation or political group, just a network of like-minded youngsters willing to stake their lives if the government doesn’t give in. Creating a clear parallel between his planned suicide act and Bhagat Singh’s execution, Madan says ominously, “Gandhi has reappeared in Anna’s form. Shaheed Bhagat Singh too has to reappear.” 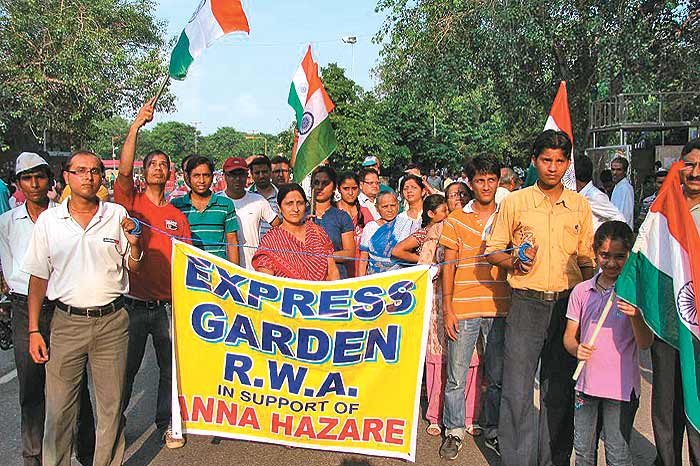 We Built This City On...

Since August 16, the day Anna Hazare was arrested, the residents of Express Garden housing society in Indirapuram, Ghaziabad, an NCR suburb, have been taking out candle-light marches every night at 9 pm. The next Sunday, 80 of the residents took a bus to Ramlila Maidan to show solidarity with Anna. “We are all aware of how important Anna’s cause is,” says RWA joint secretary Shireesh Mulmule. Their own run-ins with dishonest builders, corrupt cops and officials has only shored up the sentiment. It’s an oft heard story in this matchbox city of high-rises. Express Builders, who constructed their society, didn’t deliver on the promises at the time of booking the flats. The construction quality is bad, the super built-up area much less than what’s on paper, the basement is now a commercial zone, flats came up on the ground floor meant for stilt parking in the original plan. “We approached several officials, did the rounds of government departments but no action’s been taken against them,” says RWA president V.S. Rathi. “No one is even willing to hear us out,” he says. Despite several complaints, no case has been registered against the builder. Now they find a rare empathy with Anna’s efforts. “Whether this approach is good or bad, at least there’s an opportunity now to air our woes. Earlier, we had no chance,” says Mulmule. 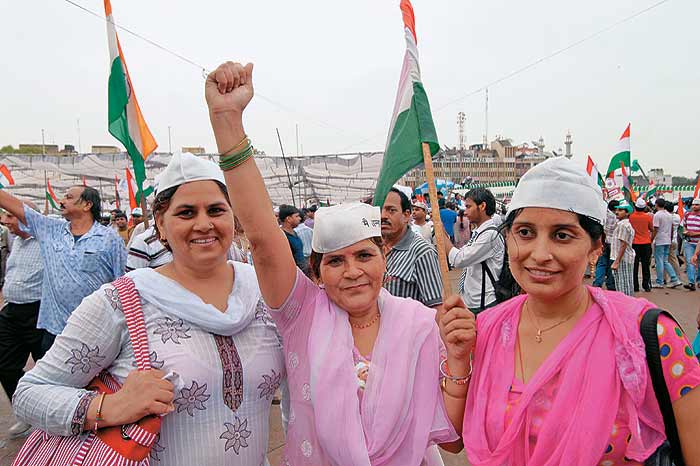 The ladies in pink, sporting Anna topis and wide smiles, are experiencing a rare moment. “Our husbands mocked us when we suggested coming to Ramlila Maidan. ‘What will you do there?’ they asked us. They are not used to seeing us doing things on our own,” says 50-something Satyavati Sorot, a housewife from Faridabad, an NCR suburb. Anna’s agitation reminds her of her own highly qualified son’s struggle to get a job. “We were told to give Rs 25 lakh but we refused. So my son is sitting at home jobless. Now I can at least come here, make some noise.” She gathered nine other women from the neighbourhood and prepared poori-bhaji for hundreds of Anna supporters. They spent an entire afternoon distributing food packets at the maidan. Their reasons for coming are varied—from anger over inflation to crooked school admission procedures—yet there is a collective sense of empowerment in having found, quite literally, a sprawling platform to air their woes. Satyavati’s friend Urmil Kaushik shudders at thoughts of the future of her young sons. “We were asked to donate an air-conditioner while applying to a school,” she says. But does Anna have an answer to their dilemmas? “For us, he represents the truth,” says Satyavati. “We’ll be back tomorrow with an army of more women from our locality and lots more food,” they promise.