With protests reaching a crescendo, pressure mounts on Gyanendra to back off Updates 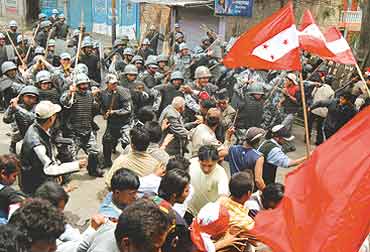 outlookindia.com
-0001-11-30T00:00:00+05:53
As thousands upon thousands of Nepalis poured out on the streets of Kathmandu to demand the immediate restoration of democracy, the American ambassador to Nepal, James Moriarty, underscored the abject failure of King Gyanendra's 14-month experiment of directly ruling the country from the palace. He said, "The United States does not want to see the king flee the country clinging to the wheels of a helicopter." Moriarty's brusque remark was an incontrovertible evidence of the political winds changing direction in Nepal. For, over the past few months, the US ambassador had seen Gyanendra as a bulwark against the Maoist tide spilling over from rural Nepal into the city of Kathmandu.

Moriarty's comment, in some senses, vindicated Indian diplomats who had been stressing upon the growing unrest against the king. Last week, as people defied curfew orders and braved bullets and batons to turn out in unprecedented numbers against the king, Indian diplomats characterised the situation as "pretty grim". One of them told Outlook, "This thing—the protest—has taken a life of its own. It is no longer about the Maoists. People see the king as an obstacle. Spiralling protests will bring into force an unpredictable dynamic. Inherent in the situation is the possibility of a complete collapse of the state apparatus and chain of command."

The movement for democracy, clearly, exceeded the expectations of just about everyone: those who launched it, those against whom it is pitted, and those who have a stake in Nepal's stability. More broad-based than the 1990 movement, which ushered in multi-party democracy, these protests have brought in its sweep the entire country and all classes, barring the elite and those who form the Royal Nepal Army (RNA). Indeed, observers feel both the king and the political parties comprehensively underestimated the depth and extent of anti-monarchy sentiments.

The nature of the current movement, perhaps, prompted Indian ambassador S.S. Mukherjee to tell Gyanendra during their meeting last Sunday that the palace should make a political assessment of the people's aspiration—and seek to address it. The king reportedly agreed that "something new" needed to be tried out but, in the same breath, expressed his worries about the Maoists and a few in the political mainstream. Sources say that there now exists a "broad agreement for a new government but the mechanics of it has to be worked out. It is not the end of the endgame but the beginning of it."

The Indian government thought the situation was serious enough to send a special envoy, Dogra royal Karan Singh, to meet Gyanendra and deliver the message that he had very little time left, that he needed to hand over power to political parties unconditionally and grant them the full authority to run the government. The king, sources say, indicated his "willingness to back off".

At the time of writing this piece, Thursday evening, there were expectations that Gyanendra would address the nation on Friday and unveil a roadmap to the future. [This is what indeed happened as a grim king did address the nation on Nepal TV and Radio on Friday "to affirm that the executive power of the Kingdom of Nepal ... shall from this day be returned to the people" and called on "the seven-party alliance to recommend a name for the post of the prime minister at the earliest for the constitution of a council of ministers which will bear the responsibility of governing the country"-- Ed, outlookindia.com]. Protesters reportedly converged on the royal palace on Thursday afternoon defying curfew. The police opened fire, killing three and injuring many. Observers put their strength at roughly three lakh. "If he doesn't make up his mind, it's curtains for him," declared a diplomat. But this roadmap must see the king tread a path he hasn't hitherto—that of compromise. What ought to be the nature of this compromise?

Senior sources say the king is still convinced that political parties cannot be trusted to take the country anywhere and the Himalayan kingdom's current woes are a legacy of their inabilities. Nor has he been dissuaded from his fears about the Maoists devastating the country. For the moment, it seems even those who are paranoid about the Maoists such as the Americans may have veered round to the view that a future solution must include three strands: the king, political parties, and Maoists.

So far, the king had banked on the people supporting him in a possible confrontation between the palace and the Maoists. Yet, one week's demonstrations have illustrated the ability of the Maoists to pull crowds against the king in rural Nepal. This is in addition to the other lesson of the 14-month direct palace rule: the RNA can't establish military supremacy over Maoists. 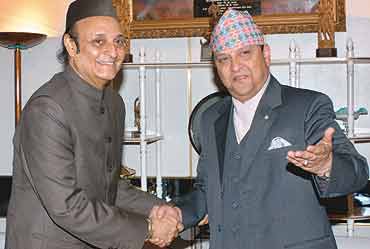 Gyanendra received another rude jolt during the Chinese state councillor Tang Jiaxuan's visit to Nepal earlier this year. Tang made it a point to meet the opposition leaders. And though he knew the Communist Party of Nepal (UML) leader Madhav Nepal was in jail, Tang sought a meeting with him. His subsequent advice to the palace to seek reconciliation with the Opposition dashed whatever hopes the king might have had about Beijing offering him political succour.

Yet, there are two imponderables which could push the country over the brink:

Sources say party cadres are now "a lynch mob". The popular mood is such that the parties cannot compromise with the king. All over Nepal people are raising slogans targeting Gyanendra—and not just the institution of monarchy. They call him a "murderer of his brother", "smuggler", "antique dealer". Another slogan doing the rounds is Gyanendra chor gaddi chhod. (Thief Gyanendra quit the throne). In Nepalganj, say diplomats, the King Gyanendra Chowk was destroyed and renamed Democracy Chowk. In many instances, the police have been reluctant to move against the protesters, and "RNA generals have conveyed to their chief (Gyanendra) that what they are doing is unsustainable". Opinion is, however, still divided on whether the movement is genuinely republican or simply anti-Gyanendra.

One key factor in the emerging scenario is the RNA. Its officers are currently steadfast in their loyalty to the king. To them, a republican future is bleak. Sources say that though the Maoists "are anxious to get into the political mainstream," they have stipulated that they will disarm only after the RNA is taken out of the king's control, placed under parliament's supervision, and confined to the barracks. Further, the Maoists have also promised to transform the RNA into a people's army. (How this is proposed to be done is still a mystery.) It's not clear what the RNA's response to a possible loss of power and pelf could be.

Diplomacy is always tricky in a city witnessing democratic upsurge. It's more so in Kathmandu because of the perception about the king in diplomatic circles. "The king will try to retain control," says a diplomat, "through some deception or the other". India's challenge is to balance the competing objectives and yet ensure a smooth transition from direct rule to democracy. "But it's up to the king to establish credibility with the political parties and the people just as it is up to the Maoists to establish trust amongst their potential allies."