India has to play and win more Tests to convince everyone 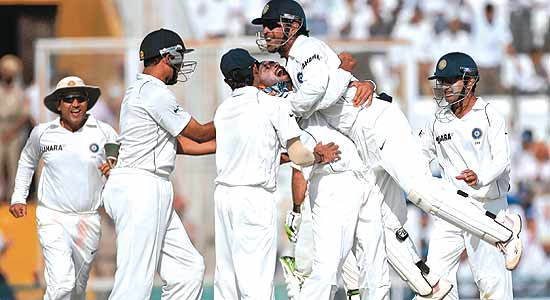 “India has played much better Test cricket than others in recent times. They deserve to hold the No. 1 spot.”

“We are the team to have performed in Australia consistently. The SA record will get better with more trips.”

“Even when Australia were No. 1, they lost in India regularly. India can win series in South Africa and Australia.”

“India’s getting to the No. 1 ranking in Tests is a greater achievement than winning the T20 World Cup.”

Oscar Wilde may have been wrong, after all—getting something one wants isn’t necessarily tragic. By beating Sri Lanka last week, India have become the No. 1 Test team, a goal they’ve been working at over the last few years. Losing it without a fight would be tragic—imagine if sprinter Usain Bolt were told at the London Olympics that the 100m race has been substituted by a 10m dash! So, belatedly, the BCCI seems to be working to give the Indian cricketers what they really want—more Test matches and a chance to hang on to the No. 1 spot.

India could lose the top ranking early next year to South Africa if they beat England 2-0 or 3-1. India have only two Tests, against Bangladesh, over the next 11 months—not enough to reclaim it. South Africa have at least four and Australia, currently placed third, have eight Tests. Losing the crown without a chance to defend it would sock a nasty blow.

India were scheduled to play three Test matches and five one-dayers against South Africa in February-March next year, but the Tests stand “rescheduled” (read: cancelled) for now. This was done to facilitate the advancing of the Indian Premier League from May to March. But the BCCI is now trying to “convert” some ODIs against South Africa into Tests. “We’re exploring the option of holding Tests against South Africa,” BCCI chief administrative officer Ratnakar Shetty told Outlook. “Irrespective of the rankings, the board realises that the team must play more Test cricket.”

Yet, that realisation has sunk in in the wake of the debate after India’s ascension to the summit. The debate has focused on the BCCI’s aversion to Tests, and on how India could be undeserving of the top spot. In trying to convert ODIs into Tests, the BCCI seems keen to refute the first charge, besides giving the team the chance to disprove the second.

The second charge may be unfair, given that every team operates within the same parameters of the ranking system. But the fact remains that India have never won a Test series in Australia and South Africa, and haven’t won in Sri Lanka since 1993. Their last visits to these nations have ended in 1-2 defeats, all within the last three years. But former Australian captain Mark Taylor believes India deserve the top ranking. “They’ve played much better Test cricket than the others in recent times,” Taylor told Outlook. “South Africa beating Australia in Australia last year was very significant. But these four teams are very close together...and India are a deserving No. 1. It’s up to them to hang on to it now.”

Hanging on won’t be easy, even if they get to play more matches. India, likely to lose some of their greatest cricketers over the next two years, will undergo the rebuilding process that Australia are experiencing after the end of a 15-year reign. Old (relatively) masters have played a big role in India’s climb to No. 1 which, incidentally, completely discredits former coach Greg Chappell’s attempts to reduce their roles.

Chappell victim Sourav Ganguly, who sparked India’s charge to the summit, says it won’t be right to judge the young players who would replace the masters without trial. Yet Ganguly agrees that India must do better abroad, especially in South Africa. “In Australia, we drew the series 1-1 in 2003 and lost 1-2 in 2008, when we were clearly very unfortunate,” Ganguly says. “We’re the one team that has done very well there consistently.” India have done well in the shorter formats in South Africa, lifting the T20 World Cup, and reaching the 2003 World Cup final. But India’s Test record, says Ganguly, should improve with frequent visits and greater familiarity with South African conditions.

History shows champions often come up against inexplicable bogeys that  haunt them in one country or the other. The mighty West Indies of the 1980s could never win in New Zealand and won just one series in Pakistan. Again, when Australia took over as the top team, they strove hard to win in India and failed. Their sole series win, in 2004, can be attributed to BCCI politics. Current BCCI chief Shashank Manohar, apparently wishing to spite then president Jagmohan Dalmiya, provided a green pitch at his home venue, Nagpur, tailormade for the superior Australian pace attack, shocking even Adam Gilchrist, their captain. (Ganguly, famously, retired hurt.)

Says former Indian captain Anil Kumble, “Even when Australia were No. 1, they regularly lost in India. For every team there are ambitions and goals, and our team has the potential to notch series wins in South Africa and Australia.”

Former captain Bishen Singh Bedi says India’s ascent to No. 1 is a moment to celebrate, though accepting wins in South Africa and Australia would have ensured this status couldn’t be questioned. “How often do you have an occasion to rejoice in Indian sport? This is a much greater achievement than winning the T20 World Cup, as anyone who’s played cricket will tell you,” he says.

The BCCI awarded the players Rs 25 lakh each for this achievement. “Can you buy everything with money? I’m sure the players are past caring about money. They’d have been much happier if the entire BCCI top brass had been present to honour them with the trophy after they beat Sri Lanka,” laughs Bedi. Shetty was there, but conspicuous in their absence were others like Sharad Pawar and secretary N. Srinivasan. Adds Bedi, “They’d have been there if India had been playing Australia and not Sri Lanka! Forget the BCCI’s apathy towards Tests, rejoice for now, for you never know for how long India will remain there.”