A sober, analytical demonstration of the "various tellings" of the sack of Somnath 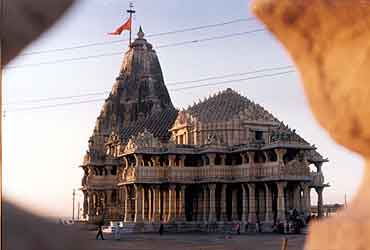 Somanatha—The Many Voices Of A History
By Romila Thapar
Penguin Rs 375; Pages: 272
On January 14, 1843, a certain Captain Harries wrote sardonically to his father from rural Punjab, about the "droll cortege" he was helping escort from Afghanistan to Kathiawar. "First of all comes the adc on a white Arab (charger), with 25 troopers as his escort, next the Political Major and the officers of the Escort, and then drawn slowly and solemnly by four and twenty bullocks the car carrying the Gates surmounted by a tall and imposing canopy of Red Cloth with fringes of silk and tinsel; the curtains are so arranged that when a sufficient number of villagers are collected round the car, the curtains can be raised for them."

The sandalwood gates, unhinged from a derelict tomb of Sultan Mahmud on the express orders of the Governor-General, were thought to have been removed from Somnath by that notorious despoiler in 1026. The November 1842 proclamation addressed to the ‘People of India’, which a privately irreverent Harries had earlier forwarded home as proof that he had survived the Afghan war, had talked of avenging "the insult of eight hundred years": "the gates of the temple of Somanath, so long the memorial of your humiliation, are become the proudest record of your national glory". Not even the most hyperbolic ‘Muslim’ account of the loot of Somnath had mentioned the gates. In the event good historical sense prevailed, and the Bare Lat saheb agreed to these being locked up in the Agra fort. The certitude of memory had been stopped short of crowning a historic triumph.

The raid on Somnath by Mahmud is a historical fact, but of greater interest for a historian of multiple representations that adhere or bounce over the past is what is made of this event. It is not a faddish post-modernism that animates Thapar’s effort to showcase the "many voices of the history of Somnath". Hers is an attempt to demonstrate soberly and analytically how "the event is enveloped in a variety of tellings, linked to the histories of communities and their identities".

There has developed in India, as elsewhere, an undercurrent that freezes public discourse with a caveat: "That may be your History, but this is my/our past." It is the svadharma of the professional historian then to convey a sense of the way pasts are remembered and elided, retailed and curtailed, and the relationship of such pasts to a sense of community: sectarian, provincial or national.

Thapar picks up different sets of the accounts of the temple’s despoiling, both as event and as metaphor, gathering significations well after the booty had been carted to Ghazni. The Turko-Persian narratives gloat over a fantastic account of the form of the deity destroyed, vainly conjuring from thin air the notion that it was one of the three idols that survived the iconoclasm of Mohammad in Arabia, and migrated miraculously to Kathiawar; Sanskrit inscriptions of the 11th-15th centuries from in and around Somnath curiously do not castigate in any significant way the mleccha Mahmud’s evil-doings. Instead, a bilingual Sanskrit-Arabic sale deed of 1264 refers to an amicable agreement between an Arab shipowner and aldermen of the temple town, witnessed to by the local brihat purusha, laying aside land and resources for the construction of a mijigiti (masjid) for the locally resident Muslims. The social and economic dealings with the shipping magnate Nuruddin Feroz of Hormuz by the temple-town elite of Somnath were not overshadowed by the gratuitous iconoclasm of two centuries ago.

Nor do Jain and Rajput epics of the medieval period, even where encountering the ‘Turks’, or salvaging the deity of Somnath, harp necessarily on Mahmud’s original sack of the temple town. On the contrary a Tantric text refers to Mahmud, the son of a Turkani, as a bir (hero), whose invocation removes obstacles and cures afflictions.

The notion of the long-standing memory of a ‘Hindu defeat’ at Somnath in 1026, invoked by Lord Ellenborough, is very much a form of ‘colonial knowledge’ for which there is scant evidence till early 19th century, either in textual material or in folk memory, local or ‘pan-Indian’, if there can be such a memory before the advent of print culture. But that does not make it any less real. Characteristically, whether it is the notion of a unified ancient Indian civilisation, the idea of a long-existent Indian Nation, or the memory of Somnath—all seem to be 19th century products, all laying an insistent claim to a long pre-history. It is only recently that historians in India have begun to explore not just the politics of memory, but also how remembrances (and this is more difficult) play on the certitude of facts.