But will it be just backstroke? What terms of engagement will define the future? 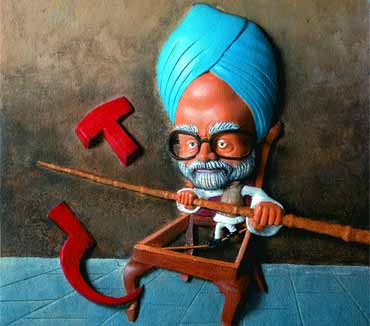 For the philosophically inclined, like the Congress party's new chief spin doctor and head of its media cell, Veerappa Moily, the enforced "pause" in the Indo-US nuclear deal is time for poetry. He quotes T.S. Eliot for Outlook from The Hollow Men, "Between the idea/And the reality/Falls the Shadow." Indeed, the shadow of the Left looms large and magnified over what should have been the high point of Prime Minister Manmohan Singh's tenure in power, effectively preventing India's integration into the international nuclear order from becoming a reality. But will poetry be of any comfort to Manmohan Singh, who invested so much personal capital in the Indo-US deal? Or will it just make him feel like a Hollow Man? Can he convert the challenge of this defeat into an opportunity?

There have, of course, been brave statements emanating both from aboard the Prime Minister's Special Flight (he is away on a tour to Africa) and the Congress headquarters in Delhi-that efforts were still on to break the UPA-Left impasse and that "the deal was not in cold storage". There have also been words of encouragement from voices in the US. But the responses made in tandem on October 12 by the two most important persons in the UPA, the prime minister and Congress president Sonia Gandhi, had an air of finality about them.

Especially as they came four days after CPI(M) leaders Prakash Karat and Sitaram Yechury told Sonia Gandhi categorically that the Left parties would not wait "for even 24 hours to withdraw support from the UPA", once the government began formal talks with the International Atomic Energy Agency (IAEA). With this first assertion by the Left that it was prepared to take the extreme step, the UPA had to take serious note of the consequences-not just of an early election, but of no deal either, as a government without a majority could hardly proceed with the agreement. Karat told Outlook on October 17, "The Left position on Indo-US strategic ties was unanimous. It is a basic issue for the Left. It is inconceivable that a government supported by the Left would allow the Indo-US nuclear deal to go through because it's part of a larger strategic alliance (with that country)."

It is against this backdrop that Sonia's placatory statements about the Left, combined with her assertion that elections would not be held before time, suggested that the government had decided to put the deal on hold. The Congress president said as much at the Hindustan Times Leadership summit: "We are not in favour of early elections." "Confrontation is not coalition dharma," she stressed. "The dharma of coalition is to work together, try and understand and accommodate each other's views." She even dismissed the notion that the Left was being "unreasonable". "We have to understand the Left," she said. "They have a certain ideology.... They are merely stating their views.... We have to take note of what they say."

Manmohan Singh may have sounded more resigned than placatory but he also made it clear that there was no question of going ahead with the deal without the Left. The nuclear deal, he said, is "honourable" and "good for India" and so he hoped "reason and common sense will ultimately win the day". However, he stressed, "Elections are still far way. The government still has one-and-half years to go to complete its term. I hope and expect we will stay the course." He ended on a practical note: in politics it was important to "survive short-term battles to address long-term consequences".

So, while the Left leaders wait for October 22 (probably the last meeting of the UPA-Left committee on the issue) for the government's spokesmen to tell them that the nuclear deal is, indeed, "on hold", not for a month or a few weeks, but long enough to make it impossible to adhere to a Bush administration-dictated timeframe, the question being asked is: what happens to the UPA government? Will it be able in its remaining year-and-a-half to take any substantive policy decisions? Will it become a "lame duck" entity? Or will it find fresh reserves of energy and convert the challenge into an opportunity? Most crucially, how will it protect Dr Manmohan Singh from being pilloried as the "weakest prime minister" ever, as BJP leader L.K. Advani has described him more than once? 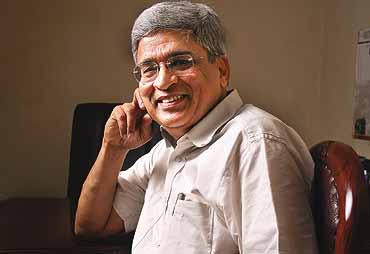 Karat-e-chop The Left were handed a chance for grandstanding on the N-deal...with polls nearing, they would have raised their pitch anyway. Expect them to continue in combat mode now.

The Left, it is clear, is not stopping at stymieing the nuclear deal. It will continue to pressure the government on its long "aam aadmi" wishlist (see Left-Hand Drive). Topping its demands will include not just checking the price rise in essential commodities-for which it has already hit the streets-but implementation of a new, pro-poor agricultural strategy, as enunciated in the five reports of the National Farmers' Commission headed by M.S. Swaminathan; increasing allocations for retargeting of the Public Distribution System to include not just the poorest of the poor; blocking corporates from entering the retail trade; tackling malnutrition; announcing a minimum support price for paddy, not just wheat; abandoning efforts towards pension and provident fund "reforms"; reworking the rules for Special Economic Zones; expanding the scope of welfare measures for the unorganised sector; framing rules for the Forest Tribal Act; and implementation of the recommendations of the Sachar Committee on Muslims.

As the CPI's D. Raja told Outlook, "Even before the nuclear deal issue assumed importance, we had decided that the Left parties needed to hold a meeting to review the performance of the government and, if need be, redefine our relationship with the UPA. We want to know what this government has done in three years to implement the Common Minimum Programme." Clearly, with or without the nuclear deal, the Left-whose only rival in its West Bengal, Kerala and Tripura bastions is the Congress-would, in the fourth year of the UPA government, have raised its pitch.

But leaders on both sides admit that pre-election point and counterpoint in the coming months will hardly be civilised. Instead, things are likely to get nasty, defeating the very purpose of keeping the Left on board, especially if the UPA chooses to point out West Bengal's poor record in implementing nregs or welfare of minorities, or how 40 per cent of the money spent on Kerala's welfare boards is eaten up in salaries for the civil servants who man them. A pro-nuclear deal minister explodes, "The Left has tasted blood-it will continue to be on the offensive and make it impossible for us to function. Why should we fool ourselves? This is a lame duck government. The longer we hang on, the worse it will be for us-we'll be seen to be a government in discord."

But the majority in the Congress, even if they feel that the deal would not only have increased the country's energy security but also made India stronger, concede that the realities of coalition politics have to be accepted. Says Moily, "The nuclear deal is a landmark one and it was a diplomatic coup on the part of the PM to have negotiated such a deal. But it's an involved process. We are in a coalition. We are not a dictatorial party. Even though international treaties don't require parliamentary backing, we can't bulldoze our way through. The Left has concerns that need to be addressed. Besides, we are not a one-issue government." 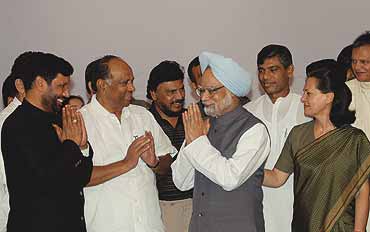 So, what next for the UPA? "It is the UPA which holds the key to the timing of the elections," a senior minister told Outlook. "So the Left will henceforth remain in election mode; it has to prove it is not the UPA's lapdog. We have to understand that and proceed cautiously. While capital market, banking and insurance reforms will have to be on hold, there are economic reforms we can proceed with which don't require legislation-in infrastructure, transportation and in the energy sector."

A senior government official who monitors the social sector said, "In the social sector, the fundamental issue is of consolidation. The architecture is already in place, the schemes are rolling-the challenge now is ensuring that the multi-layered delivery system delivers on the PM's promise of 'inclusive growth'." There had been a fourfold increase in allocations for education and health, he pointed out, and the flagship nreg scheme is shortly going to be universalised. "If economic growth is as predicted," he said, "there will be substantial resources to power these schemes. Of course, what is important is not the scale of funding, but the quality of spending."

Moving ahead, past the nuclear deal, is a need that Manmohan too realises. He acknowledged this precisely at the HT Leadership Summit when he said there was a "vast, unfinished agenda of development and reform" for the UPA government which he intended to carry on without dissipating his energy "in meaningless controversies". "If all our time and energy is spent in battling the ghosts of the past, how can we hope to do the day's work efficiently?" he asked.

Yes, there is still plenty the UPA government can do in the year-and-a-half left to it. However, the challenge before it is not just a "consolidation" of schemes but also "communication" of this to the aam aadmi. The prime minister could do well to heed what editor T.N. Ninan wrote recently, "Dr Singh likes to tell his friends who express their disappointment to him that politics is the art of the possible but, as someone once responded, leadership consists of expanding the range of possibilities."

Meanwhile, can the UPA survive its lame duck tag? "Of course, it can," says party secretary Tom Vadakkan wryly. "A duck is known for its ability to swim, not walk the ramp. So, a duck-even if lame-can swim, negotiating treacherous waters with ease."