How should the chief be paid? On performance? The market? Or the Murthy formula? 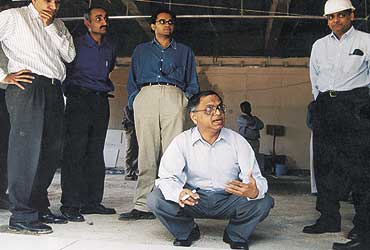 outlookindia.com
-0001-11-30T00:00:00+0553
N R. Narayanamurthy is probably the most hated man in corporate boardrooms today. A couple of weeks ago, at a cii summit in New Delhi's Taj Palace, the Infosys chairman stirred a hornet's nest by saying that salaries of Indian CEOs (including the promoter-CEOs) were too high. He said that they should not be more than 15 to 25 times that of the lowest-paid worker in their companies. Immediately, there was a hushed silence. But later, there was a natural reaction from his fellow CEOs. Rahul Bajaj, chairman, Bajaj Auto, said that the formula is unfair if applied on the salary earned by peons in his organisation.

Well, that's a thought. Going by Murthy's formula, Bajaj shouldn't be earning more than Rs 15-25 lakh a year. His annual package (not counting the numerous perks that promoters enjoy) last year was just over Rs 55 lakh. Compared to that, Infosys itself follows the philosophy of paying its senior managers within limits. Murthy's 2001-02 salary of Rs 21 lakh fits his formula, although it does not include income from dividends earned on his holdings in the company and its market capitalisation. Even Infosys' former executive director's compensation of nearly Rs 1.5 crore ($300,000) in 2000-01 seems well below others based in Silicon Valley.

Whatever may have been Murthy's reason for his comments, what we do know is that it has resulted in a raging controversy about whether Indian CEOs are overpaid. For, there's a growing fear that Indian CEOs might slowly become as greedy as their US counterparts, who happily paid themselves more even as their companies were going down the tube. Agrees Tarun Das, director general, cii, "The Indian private sector should be conscious that this trend does not come to India as increasingly the market is determining what one gets here."

More than what the market decides, one of the benchmarks for CEO salary is performance, calculated by whatever parameters you wish to. One way to do that is to measure companies' eva (Economic Value Added), which indicates whether a company is creating or destroying wealth for its shareholders. Comparing evas (as calculated by Stern Stewart & Co, the pioneers in this area) of top Indian companies with the respective CEOs' pay offers a mixed bag—cases where salaries are going up while eva has gone down and vice versa.

Now for the good news. The salary increases in the case of CEOs at Reliance Industries and Wipro were adequately backed by considerable hikes in their companies' eva. itc's Y.C. Deveshwar (annual salary in 2000-01: Rs 1.21 crore) too stole the show as the cigarette manufacturer increased its eva by over Rs 500 crore between 1999-2000 and 2000-01. Obviously, Murthy, despite his meagre salary, too falls in this esteemed category.

The case of the Tata group really highlights the contradictions in India Inc. While tisco improved its eva, other blue-chips like Tata Power and telco did badly. But since most of the Tatas' senior executives—including chairman Ratan Tata and R. Gopalakrishnan, executive director, Tata Sons—are paid by the unlisted holding company, Tata Sons, their compensations are not available. Hence, we are unable to compare the companies' performances with the CEOs' salaries. (But it seems that the latter may have gone up.)

Here's another way to judge whether Indian CEOs deserve the higher pay packets. A recent study of 16 top manufacturing companies—including acc, Arvind Mills, Bajaj Auto, Ceat Industries, Century Enka, l&t and tisco—over 20 years by Xavier Labour Relations Institute, Jamshedpur, found that top management salaries have grown at 20.4 per cent annually during 1979-80 to 2000-01. This was more than the annual increase of 12.9 per cent for other employees. The annual increase in CEO compensation was much more pronounced during the post-liberalisation period of 1992-93 to 2000-01, when it went up by 33.1 per cent compared to 9.8 per cent for others.

The same study found that corporate growth indicators like growth in sales, besides profit before depreciation, interest and taxes (pbdit) of 15.1 per cent and 16.9 per cent, respectively, during the 20-year period was less than the 20.4 per cent increase seen in CEO compensation. The disparity was rather stark during the 1992-93 to 2000-01 period where sales and pbdit grew by just 11.5 and 13.8 per cent, respectively, compared to CEO pay increase of 33.1 per cent.

But CEOs, cutting across the corporate spectrum, disagree that performance is the only parameter to decide compensation. Agrees srf Ltd chief Arun Bharat Ram, "Barring a few at the top end, Indian CEOs do not get paid too much on an average. If you compare their remuneration in relation to their company size, they will be far behind their US counterparts."

In fact, many chieftains think it is time India Inc further scaled up their pay packets. Says rpg Group vice-chairman Sanjiv Goenka, "Indian companies are globalising and their CEOs have to have a global mindset keeping in view the market realities. We should gradually move towards market-led global system of compensation for our CEOs." Agrees the Tatas' Gopalakrishnan, "The market does provide one vector for determining compensation." Finally, Escorts group chairman Rajan Nanda, chips in saying, "Fundamentally, Indian firms have to be led by high-calibre leaders to manage world-class businesses." Implied in that last statement is that you can't get such leaders unless you pay them attractively.

So, how should one decide on CEOs' packages? Answers Asian Paints MD Ashwin Dani, "It's difficult to quantify what a CEO should earn. It should be a function of the perceived value that he would add to the organisation and this could be both quantitative and qualitative depending on the role the CEO performs in the organisation." Adds Nanda, "A CEO should be paid for his responsibilities and his standing in the corporate world." Another option is to pay more if the company's board feels it needs a high-profile personality to lift the firm's bottomline. In such cases, price should not be a barrier.

Let's now see what experts in this field have to say about the issue. Tejpavan Gandhok, country manager, Stern Stewart & Co, feels that CEO pay should be based on a wide range of parameters. For instance, he says that salaries can be linked with two categories of parameters: leading and lagging. While lagging indicators give an idea of the financial performance of the company on the basis of available data, leading ones give you a feel of the future wealth-creation possibilities in the company.

However, involving more factors in determining CEO pay will surely make the issue more complex. As Gandhok admits, even his formula "raises more questions that answers". Well, what else did you expect when it comes to a sensitive, controversial, contentious issue like determining the compensation for Indian CEOs and promoters?