ETmail: Can You Read This

ET/UFO fanatics get ready for their Vindhyas rendezvous, circa 2009 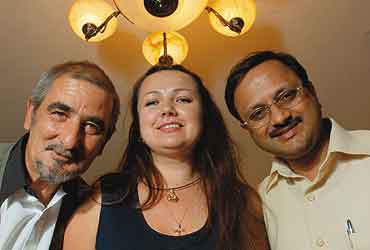 outlookindia.com
-0001-11-30T00:00:00+0553
India's got problems. And one thing we don't need added to our burgeoning list of woes is an alien invasion. But if the prophets of SifTor, an independent Ukrainian organisation looking to set up a research institute in India, are to be believed, we will soon be hosting a giant round of inter-galactic peace talks, tentatively scheduled for 2009. And to think some of you were complaining because Enrique Iglesias didn't tour your city.

I race up the steps of the swanky south Delhi villa—how often do you get to meet renegade Ukrainian scientists, members of the secret (now disbanded) USSR Search for Extra-Terrestrial Intelligence programme (SETI), who claim to be in active contact with aliens?

My guide on this trip to outer space is filmmaker Bhaskar Bhattacharya, who's recently taken these scientists to Nainital to meet Avtar Baba, a supposedly 1,800-year-old yogi famed for his mystical healing powers, and discussed ancient Vedic scripts, fossils and simulacra. "The eastern approach to extra-terrestrial intelligence is fundamentally different from the western. For us, beings from other worlds are internalised and omnipresent, we don't have to spot flying saucers," says Bhattacharya, who adds that he's involved not because of any intrinsic belief in alien existence but simply for a laugh. "All this is an extension of imagination; it should be approached with a mixture of caution and enthusiasm."

Enter the scientists. The first thing I notice about Ukrainian scientist Hemant Pathak is—he is Indian. I then learn he was not a scientist either but a new-age yogi, drawn away from his export business by SifTor's president, Yuri Marchuk, who speaks only Russian and claims he's a former Soviet SETI scientist. "Aliens first contacted me in 1992," says Marchuk with the easy casualness of a man ordering cigarettes, as he introduces his wife Viktoria (who has X-ray eyes). He describes his first meeting with his aliens with some relish—he saw a green pillar of light, from which three humanoid figures, 1.4 metres tall, naked, green and with eyes resembling Keanu Reeves' sunglasses in The Matrix emerged. But he refused to accept that the presence of ETs should be kept secret and so decided to become an independent researcher.

Since then, he's received extensive coverage on Ukrainian TV with his live broadcasts, which usually comprise amateurish UFO footage, interviews and Marchuk fiddling on his computer with wave graphics. "Many see aliens, but Yuri is one of the few people they've contacted personally. They gave us filters to receive messages and told us what software could interpret them," translates Pathak.

Marchuk clarifies he's a part of the aliens' communication programme, an ambassador of sorts on a mission that sounds straight out of Isaac Asimov's Foundation. "Our world is in a state of decline and various galactic civilisations are worried we're on the verge of a major meltdown. They have instructions for us. Unless we manage to persuade governments worldwide to follow them, our civilisation could be destroyed." According to Marchuk, every government has a secret SETI programme and knows aliens exist. What was his role in the Soviet SETI? He was in the Government Institute of UFOlogy. Is UFOlogy a technical term? (I can't translate, says Pathak). Interestingly, they aim to provide governments with information they claim governments already have.

The desire for public awareness isn't absolute. Asked exactly how the aliens send them signals and how they decipher them, they say this information is only for believers. What do their aliens call themselves? When they arrive in five years, says Marchuk irritably, ask them yourself.

Without government support, SifTor relies on private funding to survive—but then, so does the American SETI project, founded in 1984. But in the case of several alien-contacting organisations, the search for funds is often the motivation behind the project. However, SifTor brings more to the table than mere aliens—their outer-space buddies have apparently also made them capable of psychic healing. "We've treated around 30,000 people since 1996. People we've healed, especially businessmen, contribute to our funds," says Pathak blandly. This is also his way of dealing with sceptics—"I paralyse their internal organs. Then they believe me."

They're also in touch with the "cio" in the US, the cbi in India and other "secret, hidden organisations". But if their mission is moving governments, their efforts in India haven't been too spectacular—they've only spoken to a former chief justice whose name Pathak can't remember.

More about the aliens. They study us through chips implanted in our brains, or by turning us into zombies. They impregnate women to create hybrid children for the future. And it's not just one race of aliens—there are good aliens (spiritual ones) and bad aliens (technological ones, somewhat predictably in touch with the US). This is perhaps Manichaeism reinvented for a globalised and unipolar world. Marchuk's aliens know all about us, but lack the sense to find ambassadors who speak English or Mandarin.

What are the aliens worried about? North Korea—nuclear war could overheat the secret generators in the Himalayas, leading to devastating earthquakes. It's imperative that Indians stay "cool and calm", especially between February and April 2005, because if the crystals implanted on the back of a billion people's heads get overheated simultaneously (because of tension, aggression etc) more earthquakes are in store.

But if we manage to stay docile, we should expect a spectacular landing near the Vindhyas in 2009. Why here? Because Indians blend technology and spiritualism well, and should reach superpower status in eight years if they follow the guidelines from above. Also, India possesses encoded information given to our ancestors by aliens in ancient Brahmi scripts, which the aliens occasionally send Marchuk. Using his innate ability to interpret these scripts, he's predicted 9/11, global warming, asteroids and election results. He shows me the alien messages on paper and video. "We need to get all the people who can read the scripts together to help us understand the aliens." Strange, considering he also claims he already understands them perfectly—but if you can interpret the patterns on the scripts on this page, get in touch.

Marchuk suddenly pulls out what looks like a radio antenna and points it at me. It oscillates slowly and an expression of disquiet creeps across his face. "He's giving his brain some rest," explains Pathak, as the rod swings on hypnotically.

So enthused are Pathak and Marchuk by their discoveries in the Himalayas that they've actively been looking for land to establish a centre in India. Their prime contact in this regard has been Auroville Foundation chairman Kirit Joshi, who has asked them to come back later. "We want to open a centre either in the mountains, or in Auroville, where interested people can find out more about inter-galactic civilisations," says Pathak expansively. "Mr Joshi will eventually take our information to the President and the PM."

And then he's off, to catch his flight to Ukraine. He'll be back a month later, though, with Marchuk and more believers. We might see a large number of alien-seekers wandering through the Himalayas in the coming years, if alien-spotting becomes a popular Indian pastime. The alien-heralds of SifTor, like their friends out there, could merely be the First Wave.