There are those among the political class willing to search within 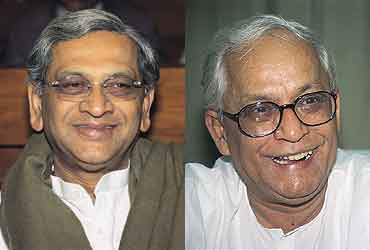 outlookindia.com
-0001-11-30T00:00:00+05:53
While scouring India’s galaxy of politicians, one does find a few representatives whose careers are possibly as spotless as their starched white outfits. These are politicians who will admit to the decay in political life. Adopting an attitude that is introspective rather than accusatory, they express concern about the growing disconnection between politicians and the middle class. They advocate a clean-up operation to rescue politics from further ignominy.

"It is a major problem for us to ponder about, since politicians are primarily responsible," says West Bengal chief minister Buddhadeb Bhattacharya. The middle class, he says, is too caught up in material exigencies and in the travails of urban life to spare time for political parties or ideologies. The criminalisation of politics further adds to the disengagement between the two groups. "It’s a sad fact of life that downright criminals are entering politics and that some politicians are themselves making money illegally," rues Bhattacharya. Not only is a political career seen as unviable for the middle class youth, but the political act of voting itself is considered ineffectual.

Instead, elected politicians seem to have no goal other than to cling on to their office. Says former Gujarat chief minister Suresh Mehta: "The politician will do anything to achieve his goal of remaining in power. If he has to break the law, use muscle power or do morally unacceptable things, he does not think twice as long as it keeps him in power." Venality in public life is a direct consequence of the politician’s "addiction" to power, creating a gulf between him and the disempowered. "And now, rampant corruption and criminalisation of politics has led to hatred for the politician," believes Mehta.

Which is why politicians believe they themselves have to take the initiative in revamping politics. "We need to bring more of the social service element into politics, even while conceding that it is a profession," says Kerala chief minister A.K. Antony. Agrees Karnataka chief minister S.M. Krishna: "We should be austere, the expenditure of politicians for private gatherings should be curtailed."

An alternative approach to wooing the middle class back into politics is to bring governance to the city-dweller’s doorstep. Krishna speaks of the need for "confidence-building measures to change the perception of the urban population". In concrete terms, this would include forging a partnership with citizens. Politicians should be seen as responsible citizens. "Why should politicians avoid paying taxes, lie about their assets, block investigations and bother only about their perquisites and allowances?" asks Bhattacharya.

The rot, of course, is not exclusive to politics alone, and if anything, a hard-nosed and independent media has helped establish the unsavoury links between private and public players. Antony says of the role of the media: "The media have made politicians more accountable, but mutual mudslinging has also contributed to the overall lowering of the politician’s image."