Online classical lessons have restored the guru-shishya harmony across continents 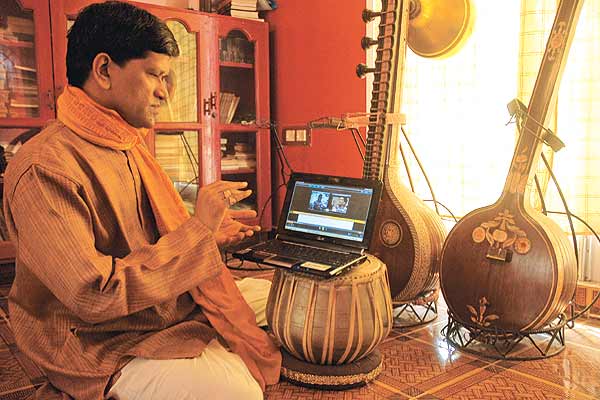 Every evening, 12-year-old Eesha returns from a busy day of basketball and high school academics to her home in suburban New Jersey, where she shuts herself in her study and turns to the less taxing exertions of homework. At 7.30 pm, all distracting windows are dispensed with. A metronome is flicked on, an electronic harmonium intones a single, droning note, and Skype—an online video-conferencing program—is summoned. On it, half a world away in Chennai, eminent violinist and vocalist Palghat T.R. Rajaram sounds out the first plangent notes of the day.

These music lessons over the internet might sound like blasphemy—rather than music—to the ears of orthodox Carnatic musicians, who believe strongly in the ancient ‘gurukulam’ system, which has students living with and serving their teachers while they learn. But a new generation of internet-savvy musicians are reversing this attitude, privileging generosity and transcontinental reach over hoarded exclusivity, much to the gratitude of Indian students, especially those from the diasporas scattered across Europe, the US, Singapore, and the Middle East. Explains Raman Kalyan, better known as ‘Flute’ Raman: “For the old masters who taught me in the ’70s, recording was taboo, they saw it as the looting of their treasures. But for me, the internet is a billboard, a way to reach a worldwide audience.” Unlike masters of a previous generation, who’d keep their fingering ‘tricks’ and musical notations to themselves, Raman, who began teaching students Carnatic flute and vocals out of his Washington DC base five years ago, has his ‘tricks’ generously strewn across his website and download-ready—in audio, video, and pdf form. Among his students is environmental researcher Puja Jawahar, 30. She learnt from him in person in DC, and now, having moved to Delhi two years ago, is able to continue the arrangement online. It works, she testifies triumphantly. “The video quality is so good.”

Raman is not the only teacher to have understood that in this age, you’re as memorable as you are Google-able. Search for just about any music season headliner and you’ll see a personal website, an e-mail address, and sound files to download. Maestros like vocalist Neyveli Santhanagopalan, violinist Vittal Ramamoorthy, ‘Delhi’ Sunder Rajan, both violinist and vocalist, Hyderabad Brothers and even dhrupad singer Ramakant Gundecha, one of the famous Gundecha Brothers, all beam radiantly at you from their home pages, offering to teach you over the internet.

Much of the demand can be traced to the more-Indian-than-Indian NRI, for whom classes on the internet are a cost-effective, time-saving way of keeping their children in touch with a cultural heritage several continents away. For Eesha’s mother, Ramaa Ramanujam, testing the limits of technology is infinitely preferable to ferrying her child to group classes and hanging about in malls, waiting for them to end. “Where we live, it’s a long drive to anything Indian,” says Ramanujam, “So taking Eesha to a music lesson would mean a three-hour project for a one-hour class! This way, she just logs in, and is ready to sing.”

Even before broadband arrived in the bylanes of Chennai, teachers like Rajaram had developed an innovative “chain-call system” to teach a succession of NRI kids over the telephone. Once the first child’s lesson was complete, the pupil would be told to phone the next student on the list, who would then call the teacher. Internet video conferencing takes interaction to a new level, and allows the teacher to correct previously inaccessible aspects of his students’ performance, like posture and enunciation.

Social leveller that it is, the internet has taken south Indian music beyond an exclusive aristocracy of practitioners and listeners. One of Raman’s best students today is an Atlanta-based IT professional who had earlier tried to teach himself—with flutes fashioned out of pvc pipes and reeds of bamboo from his backyard—through flute tutorials on YouTube. Thanks to Raman, most of that has now been safely unlearnt, and this son of a bus driver from a small village in Karnataka now plays before packed Kannada Sabha halls around Georgia. Says Raman, “He told me none of this would have been possible if he’d remained in India.” Singer Shubha Mudgal observes that the more serious online students are usually from the south. “I hate to generalise, but south Indians have a more sustained interest in learning, whereas in north India, music lessons are often at best a finishing school experience,” she says wryly.

Teachers, by and large, eulogise their NRI clientele—the children, they say, are way more disciplined than their home-grown counterparts—and their rapturous descriptions make even the most blandly, uniformly suburban quarters of California and New Jersey sound like a perennial Madras Margazhi month. “They have much more cultural activity as they would like to ward off unwanted aspects of American culture,” says Rajaram. “They have concerts more often, and they celebrate Navratri like we did in villages 20-30 years ago.” “Also,” Rajaram adds, admiringly, “I’ve never seen any of my students in jeans or salwar-kurta. They all look like pukka village girls in their bangles and pavadai chattai (traditional clothing). They’re only American if they open their mouths.” Ramakant Gundecha, Bhopal, Dhrupad, www.dhrupad.org
“We have to develop techniques to teach correct language and pronunciation. That’s why we ensure they learn the basics first.”

Which, of course, they had better not be, if they’re opening their mouths to sing Carnatic or Hindustani. Most musicians are concerned about the tell-tale rolling ‘r’ that drags otherwise exemplary students back into a sea of foreignness. “We do have to take extra care that they pronounce words correctly and without accent,” concedes ‘Delhi’ Sunder Rajan, “but this is easy when they start learning at an early age”. Ramakant Gundecha, whose students are scattered across Japan, Belgium, France, Australia and the US, makes sure they spend the first few months learning the basics in his gurukul. “We have to develop techniques to teach correct language and pronunciation,” he explains. But he remains nevertheless a big fan of online lessons.

The difficulty of teaching the basics isn’t the only disadvantage of the net. Carnatic music’s gamakas—affectively charged oscillations of notes that separate an intermediate student from one who’s attained concert-ready brilliance—are also tough to teach online. Slight delays in transmission, even on the best video-conferencing programs, makes it impossible for teacher and student to sing in unison. “Due to variable handicaps like video quality, online lessons require double the time and patience,” says Rajan. Chimes in Rajaram, “A micro-second delay may be minor in speech, but in music, it’s a great setback.”

Thanks to these difficulties, or rather the need to overcome them, even conservative musicians like Neyveli Santhanagopalan, with his neat caste marks and crisply starched traditional ‘panchagacham’ dhoti, have been transformed into avid technology buffs. “With Skype, the teacher and student’s movements are only 99 per cent in sync, which produces a disturbing time lag,” says Santhanagopalan, “but with Oovoo Messenger, it’s just as good as being in front of the teacher!” he says enthusiastically.

Most musicians are far more reluctant to talk about money, particularly the greenbacks that NRIs scatter in search of good teachers. NRI lessons cost between $20 to $30 (and rising) for individual hour-long lessons, which is considerably more than what the average teacher earns in India, yet some profess a high-minded disdain for lucre. Scoffs Santhanagopalan: “Some musicians spend all their time online just to put dollars into the bank, but I don’t look at any student as a dollar-tree! I’ve formed a set of teachers, and teaching online gives them a decent livelihood that allows them to earn what they want and devote their time to learning.”

What no teacher fails to emphasise, though, is the world-flattening, distance-shrinking virtues of online lessons, and the feeling of triumph that it fills them with. “My student and I are not in the same room, but I can make him play,” says Raman. “Isn’t that amazing?”