Benazir, Musharraf make up. Now to see if it's boon or bane. 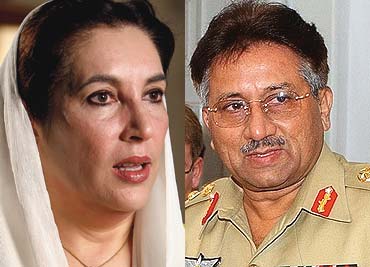 "If the PPP joins the general, they'll get an electoral thrashing they won't ever forget."
Shafqat Mahmood Ex-PPP member

"All she's interested in is getting back her billions...the party workers aren't a priority."
Shaheen Sehbai Ex-editor, in exile

Lust for power can make even dictators do funny things—like compromise their dignity, undermine their own authority, even sup with their enemies. Take Pakistan president Pervez Musharraf. He was wont to be virulent about ex-prime minister Benazir Bhutto, describing her as so corrupt that she could never be allowed to return to plunder Pakistan again. In a TV chat show, he became so enraged at the host for taking her and Nawaz Sharif's names that he said he wouldn't hesitate to "kick them".