The fuzzy border on the east again crackles with acrimony, but it all ends quietly. Or does it? More Coverage 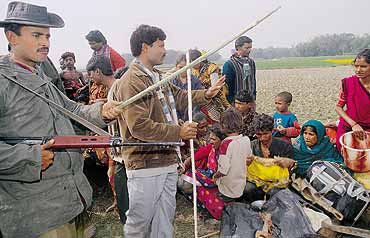 outlookindia.com
-0001-11-30T00:00:00+0553
Unwitting pawns in the wrangle between India and Bangladesh over illegal migrants, 213 Bangladeshis forcibly pushed across the border by the Bangladesh Rifles (BDR) finally found their way back home on February 6, Thursday. This, after seven traumatic days in no-man's-land with inadequate food and no shelter, a week that also saw a build-up of troops along this north Bengal border and an accompanying escalation in temperatures.

Border Security Force (BSF) commanders claimed India's steadfastness on its decision not to shelter migrants from across the border had paid off. The stranded Bangladeshis—40-odd families of snake-charmers—were quietly taken back by the BDR. It was a sudden, though welcome anti-climax to the latest border tangle.

Bangladeshi officials were all along adamant that the men, women and children were "Bengali-speaking Indians". This despite the families producing documentary proof to contrary. But BSF officials at the Satgachi border outpost in Cooch Behar said hints of an impending relaxation of posturing by Bangladesh came on Wednesday night when the 'illegal migrants' were allowed to sit on their side of the zero line. "We knew by Wednesday evening that the BDR has been reined in by Dhaka and asked to accept the stranded men as Bangladeshi citizens. As first light broke on Thursday, the group of 213 people were not to be seen, although some of their belongings were still scattered around the zero line. Probably they had left in a hurry," BSF's DIG D.L. Choudhury, in charge of Cooch Behar sector, told Outlook. Dhaka, publicly, holds to its stand that they knew nothing about the families (see Birds on Wires, page 20).

This was less than 12 hours after deputy prime minister L.K. Advani had taken a tough stand on his return from Singapore on Wednesday. After a meeting with West Bengal chief minister Buddhadeb Bhattacharya in Calcutta, Advani said: "No country in the world accepts illegal migrants. The illegal Bangladeshi migrants cannot permanently reside inside India." Simultaneously, the BSF handed over evidence to the BDR about the nationality of the snake-charmers. That's when Dhaka relented.

The plight of the snake-charmers, their children and their reptiles was becoming increasingly pathetic by the day. For a week, they sat on the zero line. For a week, their snakes were dying. Their children remained underfed and were down with pneumonia and diarrhoea. All they wanted was to get back home—which, by their account, was a place called Savar near Dhaka. "Our children are suffering from cold and hunger. And our snakes are dying. But our own people do not want us back," Sahabuddin, 40, said even as tears welled up in his eyes. A full 24 hours were to elapse before he was finally taken back by his country.

The sudden departure of the snake-charmers on Thursday was as dramatic as their appearance on January 31, when they were pushed in by the BDR under the cover of darkness. The 'migrants' were pushed back by the BSF, but they were prevented from crossing the border by the BDR, which had even begun digging trenches and deploying men to ensure the 'migrants' would not return.

While those pushed across the border were clueless as to why their own army was acting against them, intelligence and BSF officials say Dhaka may have been reacting to a hardened Indian position on illegal migration. They recall that Advani had told a meeting of chief secretaries and dgps a couple of months ago that the 15 million-odd illegal Bangladeshi migrants currently estimated to be in India must be thrown out. In the last fortnight, the VHP and Bajrang Dal leaders had added their shrill voices to the anti-immigrant rhetoric. VHP vice-president Acharya Giriraj Kishore had said in Guwahati last week that his organisation, along with the Bajrang Dal, would start a survey of border areas and identify illegal migrants in order to deport them.

The immediate trigger for Dhaka ordering the pushing in of the snake-charmers into India as a test case must have been the arrest of 56 Bangladeshis in Delhi in the last week of January. This group was brought to Calcutta by train and then sought to be pushed back into Bangladesh through Nadia district around January 30-31. Although the BDR resisted the effort, at least 30 of this group were reported to have crossed into Bangladeshi territory through an unguarded frontier outpost. It is in this context, BSF officials point out, that the BDR may have rounded up a vulnerable group of people and forcibly sent them across into India, only to find the BSF thwarting the attempt. "There is absolutely no reason why a group of snake-charmers should suddenly lose their way and stray into India," points out a senior BSF official.

The BSF had been asked by the Union home ministry to be unrelenting on their brief but to handle the crisis sensitively and humanely. Points out Choudhury: "We could not sit back and watch them die of hunger and disease. So we arranged food through the district administration and organisations like the Red Cross. Our doctors examined and treated them and also gave them whatever medicines we could provide."

But this help did not always turn out to be enough. Regina Bibi's two-month-old child was down with pneumonia and all she had to keep it warm was a plastic sheet distributed by the Red Cross. "Babu, do something. Send us home," she told reporters and BSF officials. Pleas like this, echoed by 70-year-old Bibi Banu and others, nailed Dhaka's lie that the snake-charmer families were Indian. "Baba, we have to go home, what will we do here?" was Bibi Banu's constant refrain. Says a much relieved BSF official: "We are happy they have gone back. What would they have done in India? They would have died in the cold."

Many in the group wanted journalists and social workers to get in touch with their MP back home. Said Abdus Samad: "Babu, please contact our MP Salahuddin Saheb for whom we voted in the last election. He will definitely help us once he comes to know of our plight." Some of the stranded 'migrants' had voted for Salahuddin of the ruling bnp. According to Choudhury, to a man every member of the group wanted to go back. Some even attempted to cross back to Bangladesh but were beaten back by the BDR.

That's what happened to Din Islam and a few others who tried to go back on February 3. They were taken into a bamboo grove and severely beaten up before they fled back to the safety of the Zero Line. The BDR was simply refusing to accept that the families they had pushed across were Bangladeshis. Abdus Samad used to show, to anyone who cared to see, a copy of the electricity bill he paid in October 2002 in Savar, near Dhaka. Others produced bus and train tickets that showed that they have travelled inside Bangladesh in recent months. Said Din Islam: "We have proof about us being Bangladeshi citizens. We are unable to understand why we are not being allowed to return to our homes."

The immediate crisis has found a rather enigmatic resolution, but the fact is border tensions between India and Bangladesh have become nearly a calendar event, with skirmishes being reported every month along the 4,096-km boundary. The problem of illegal migrants is also real, though there are only rough estimates on how many Bangladeshis are in India. Senior BSF officers had one thing to say in sum: problems such as that relating to illegal migrants are best sorted out between New Delhi and Dhaka rather than at the border.

Nitin A. Gokhale in Satgachi & Siliguri With Ashis K. Biswas in Calcutta