Escape From The Clutches? 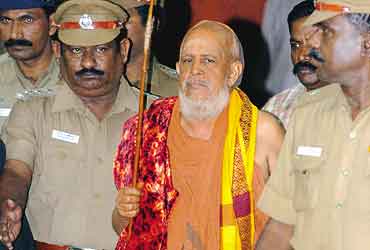 outlookindia.com
-0001-11-30T00:00:00+0553
It’s only in the rarest of cases that the SC rules that a case be transferred from one court to the other. The supporters of Shankaracharya Jayendra Saraswati would therefore see the transfer of the murder trial in the Sankararaman murder case from the Chengalpattu sessions court to the Pondicherry district sessions court as sweet Diwali-eve revenge against the "vindictive" Tamil Nadu government.

After getting the bench comprising Chief Justice R.C. Lahoti and Justice G.P. Mathur to transfer the case, Jayendra’s defence team is jubilant. The Janata Party’s Subramanian Swamy even demanded that CM J. Jayalalitha withdraw the case against the Shankaracharyas before Diwali (Diwali-eve was when Jayendra was arrested last year). It’s another matter that the Union territory of Pondicherry falls within the jurisdiction of the Madras HC. Moreover, the TN lawyers had themselves submitted, while opposing the plea for transfer, that in the event of the apex court shifting the case it could be transferred to a court in Pondicherry where there would not be any language problem.

The defence motive behind seeking the transfer was that in the "surcharged atmosphere" in Tamil Nadu, the Shankaracharyas would not get a "fair trial". Senior advocate Fali S. Nariman, appearing for Jayendra, even wondered why the chargesheet was filed on Id, a holiday. Senior counsel for the state, Rajeev Dhawan, countered: "There is nothing improper in judicial magistrate G. Uthamraj receiving the chargesheet on a public holiday." As the regular holiday magistrate was on leave that day, Uthamraj was given additional charge of remand duty. Nariman had also faulted the suo motu statements made by CM Jayalalitha on the Sankararaman case on the floor of the assembly and her announcing a solatium of Rs 5 lakh to Sankararaman’s wife, saying this amounted to direct interference of the executive. Dhawan said Jayalalitha’s statement was necessary in the backdrop of the political controversy following the arrest. The trial scene has shifted venue, but the case remains, as a prosecution team lawyer put it, "as strong as ever".