Bangalore paradoxically has no slump, while Pune is a resilient market. How?

Are Bangalore and Pune bucking a general slump in the housing market? By many accounts, the two tech towns generally seem better off than many ­other big markets and especially so when compared to the two biggest ones—NCR and Mumbai outskirts. The Karnataka capital, with half-a-dozen listed players, has not seen a slump, says the head of a real estate developer. Ashish R. Puravankara, who is also the president of CREDAI-Bangalore, agrees that total sales volumes in his city were lower but attributes that to an abs­ence of new launches. “For the ongoing projects, the sales have been quite stable. Could it be better? Yes,” he adds.

Citing an instance, the MD of Puravankara Ltd lists the delay in a revised policy on transferable development right (TDR). This meant the local government wasn’t sanctioning any plans with a TDR component during the revision process. Meanwhile, the National Green Tribunal’s buffer zone order and the new tax benefits for smaller apartments led many developers to redesign projects. Demonetisation, Ashish reckons, has not affected sales in the key southern markets for the Grade-A developers.

Typically, industry watchers describe Bangalore’s housing market as being much more stable when compared to NCR and Mumbai. By most accounts, there haven’t been abnormally high price increases. Puravankara says the year-on-year appreciation in prices in Bangalore, which he estimates at 5-7 per cent on an average, has been realistic. “The average selling price in Bangalore even today is in the range of about Rs 6,000 per square foot. It is still affordable: Mumbai’s average may be Rs 16,000-18,000,” he says. “Job creation here has been strong, price appreciation has been realistic and the quality delivered by the Grade-A players is an advantage.” There may be a glut in certain localities in the city, Puravankara says, but the lack of new launches has apparently helped to clear some inventory.

Real estate brokerage JLL estimates that prices have risen year-on-year by a marginal 0.9 per cent in Bangalore and by about 21.1 per cent in Pune. 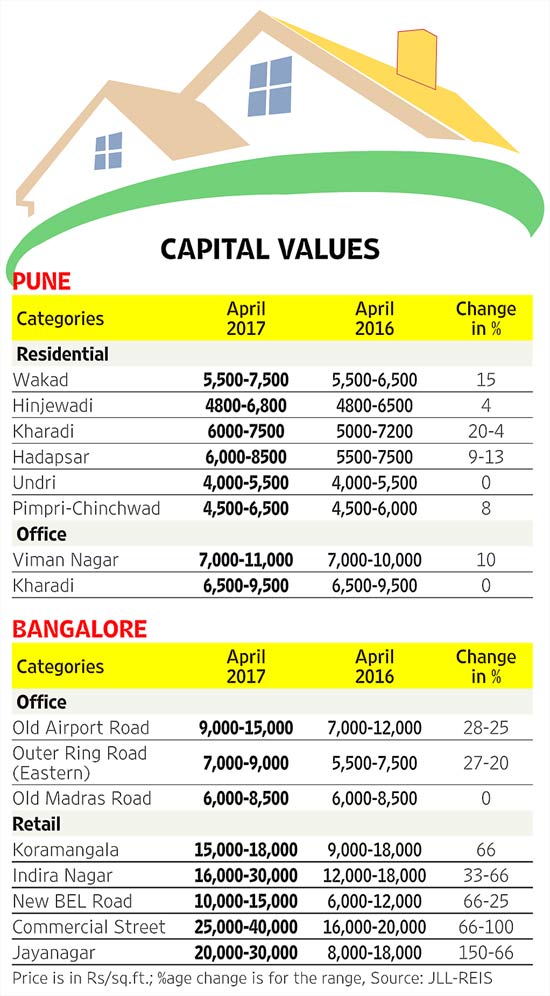 “Pune is a more resilient market,” says Gera Developments managing director Rohit Gera, who is vice president of CREDAI-Pune Metro. “One of the big reasons for that is that the run-up in prices wasn’t so much, so the crash in prices doesn’t exist. There has been a gradual downward drift.” Prices, according to a half-yearly survey that his company conducts, are down by 2.3 per cent in the last six months. “If we look at real average rates as far as Pune is concerned, we are now at three-year lows on the average prices per square foot,” Gera says.

Over the same period, however, the average size of houses available for sale has reduced from 1,053 square feet to 939 sq ft. “The size is down by about 10 per cent and the price by 6 per cent. That’s the cumulative impact,” Gera says. “Now, because of the sizes coming down, we are seeing that developers are still able to keep sales going. But certainly there are headwinds, there’s no doubt about it.”

Currently, Pune has about 1 lakh houses available for sale out of 3.27 lakh under construction—a bulk of it below Rs 5,000 per square foot, says Gera, adding the unsold inventory has reduced as a percentage over the past year. “Clearly, the total new inventory coming is reducing. As a result of RERA, we will see a further crunching of new inventory.”

Get Your Act Together