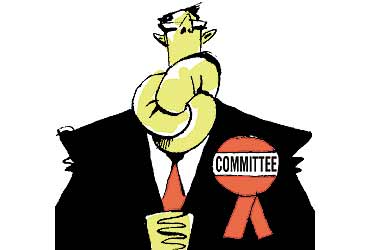 An occupational hazard of middle age is serving on boards and committees. In India, where most things happen under the aegis of the government, this is particularly demanding—especially in sectors where democracy requires consensus rather than a one-man bureaucratic diktat. Huge areas of government decision-making and spending are still determined by part-time committees—a hangover of post-Independence Nehruvian times, when India was struggling to create new institutions and a national identity without access to in-house expertise or professional consultants.

Though fondly termed "expert", a committee is not necessarily the most efficient way of achieving creative results. Members, however committed, have their own preoccupations and priorities, and devote only a fraction of their minds to the task at hand, frantically reading the background papers as they drive to the meeting, and absent-mindedly signing judiciously doctored minutes. And though committees don't get paid, they cost money—members are flown in from all corners of the country, put up in hotels, and fed lavish meals.

As part of various government committees over the years, I have selected Shilp Gurus and master craftspeople; identified architects for public buildings; sanctioned beneficiaries for government projects; bought artworks for our embassies abroad; been on juries for NIFT, IIT, and NID graduations; brainstormed ideas for the empty India Gate canopy and the resurgence of Afghanistan; developed curriculums for the Jaipur Institute of Craft and Design; strategised on task forces for tourism, handlooms, the Northeast, the 9th Plan, and the small-scale sector; chaired NCERT's initiative to bring heritage crafts into the education system and judged logos for everything from the Khadi and Village Industries Commission to India's 50th anniversary celebrations. All this done for love rather than money. My diary reveals I spend an average of 45 to 50 days a year on government committees, commissions, and consultations—often involving considerable travel, and stress, plus the donation of time, patience and energy.

The one common factor of all these disparate, diverse appointments is the effusive ritual dance of initiation and the correspondingly brusque termination. When one is first invited to join each committee or board, one is wooed, feted and fussed over. The secretary of the relevant ministry calls to beg one's "invaluable" guidance, followed by a formal, hand-delivered letter, one's name is listed in the official gazetteer, at least one flunkey escorts one inside the ministry. Sometimes, there are garlands and five-star lunches.

But when one's usefulness is over, or a change in government results in the inevitable "reconstitution" of the committee, it all ends with neither a cheer nor a whimper—just silence. Gone are the notices in triplicate (fax, e-mail, and hard copy), the urgent phone calls to ensure one's presence, the obsequious PAs desperate to get a quorum, lying through their teeth that the minister has expressly asked for one's presence, the compliments on the sagacity of one's insights, or the beauty of one's sarees...

The silence is so complete that, until, somewhere, sometime, there is casual mention of such and such meeting, one actually doesn't realise one is no longer a member! No thank-you letters, no telephonic intimation, not even a handshake acknowledging one's services, to break the news that one is no longer required! Every government department behaves in exactly the same way. The Union tourism and human resource ministries are no better than commerce, rural development or railways. And ditto the external affairs ministry. I served for over 12 years as part of their Objet d'Art Committee, and another three years on the Indo-French Forum; in both cases it was only time that eventually alerted me to the fact that this particular appointment was now part of my past.

At first I used to introspect, and wonder whether there was some hidden meaning. Was it politics, was it my personality? The fact that I didn't praise the secretary's wife's paintings; or that joke I made about the saffronisation of culture? But gradual familiarity with the process has taught me that this is just the way government functions. Now when I hear, from a newly appointed acquaintance, that my 15-year tenure on the National Master Craftsperson Selection Committee is over, just days after I'd been told to hold myself in readiness for the meeting, I philosophically await a call from some other ministry requesting my 'august presence'!

Of course one must continue to do one's bit for the nation—so what if no one thanks you. Between you and me, it would be nice if they did. Perhaps the whole business of committees should be reviewed, to see if they are still relevant. But then you would need to constitute a committee to do that.

(The author is chairperson, Dastkar Society for Crafts and Craftspeople.)