Error In The Machine?

AAP was not just another party. It came not as a regional force or a lobby—it deigned to be a universal alternative to everything. If the promise is fading, it must examine the mirror, not just the EVM. 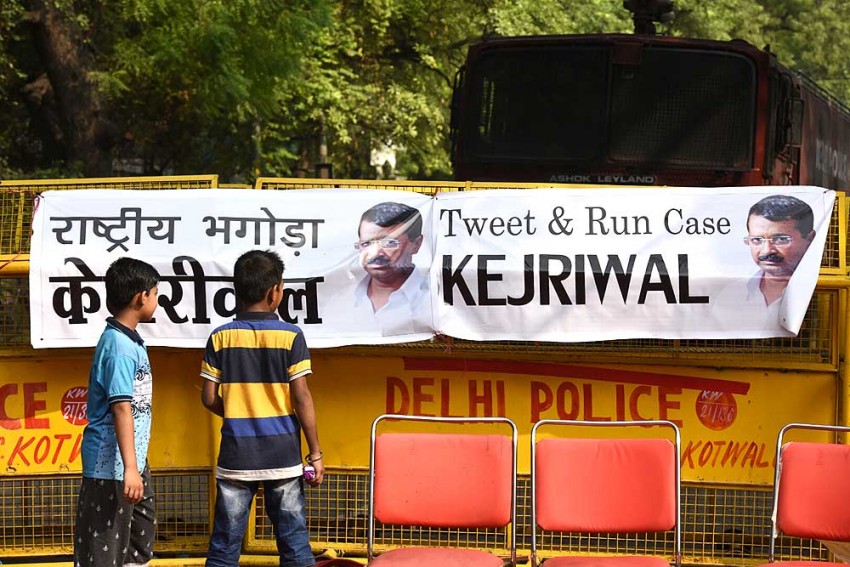 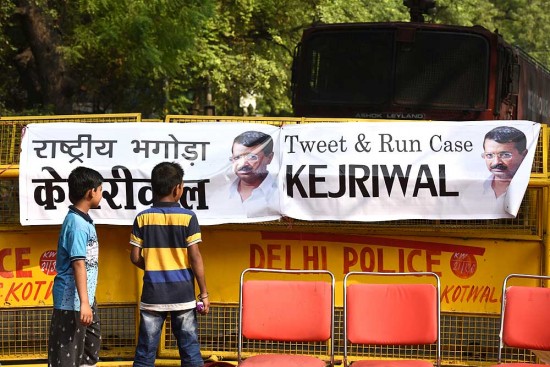 Municipal elections are usually dull city-page affairs, scarcely known to generate the kind of excitement we witnessed this week over the one in Delhi. The results are on intriguing, yet expected lines. Why intriguing? Because, really, no objective assessment can ignore the good work done by the AAP government in education and health. On the other hand, not even the most diehard BJP supporter can defend its dismal performance over the last ten years in the civic bodies. Moreover, the BJP itself implicitly accepted the validity of non-performance and corruption charges by not repeating its sitting members. So, what lies behind this perplexing situation of non-performance being richly rewarded?

In the characteristically simplistic, in fact motivated discourse so dominant in the media, it’s just Modi magic all the way. The fact, however, is that this magic is not based on any performance miracles, but is a joint venture of the BJP and large sections of the media. Many TV channels are openly working as BJP channels, some of them going to the extent of ‘analysing’ the new UP CM’s papaya and drinking water, while completely blacking out initiatives and decisions taken by, say, the Amarinder Singh government in Punjab. The Congress returning with three-fourths majority in Punjab and AAP coming second (even if with only 20 seats) might as well have never happened. Nor was there any probing of the ways through which the BJP retained power in Goa. In all fairness, the BJP must never forget to thank these sections of the media, which have left L.K. Advani’s old quip about bending and crawling far behind and have been enthusiastically contributing to the making of cult Modi, and now lately also cult Yogi.

We are now often told about ‘New India’; the Ind­ian media has most certainly entered a ‘new’, ‘never-before’ phase of its existence. Most of it has willingly turned into a less-than-docile mouthpi­ece of the government and ruling party, but more dangerously, into an instrument for distorting the very nature of social and political discourse. Real issues are almost totally barred from TV news; deb­ates are spun around artificially manufactured issues in a quarrelsome, even rowdy fashion—a lot of sound and fury signifying nothing. AAP or other blocs might have failed to offer an alternative style of politics, but sections of the media have certainly evolved an alternative concept of their role. Whoever deserves the credit for inventing this ‘never-­before’ avatar, it is important to remember this disturbing ‘turn’ in any political analysis—not only in the context of AAP or the current political establishment, but for retaining the very possibility of a critical-analytical stance vis-à-vis any regime.

At its core, the ‘Modi magic’ consists in coupling the seductive fantasies of ‘development’ with a holistic narrative of ‘nationalism’. One might agree or disagree with the RSS version of Hind­utva-based nationalism, but the fact is that it has successfully blended the popular obsession with ‘development’ with emotions evoked by the idea of ‘nation’ under external and, more importantly, internal threats. The curious story of demonetisation is indication enough of people being coaxed into ‘temporary’ sufferings in the ‘larger interest of nation’, for a better future. Actively supported by the media, and with the PM’s effective communication strategies, coupled with super-efficient social media and troll management, the RSS/BJP has really been able to conjure a spell with Modi in the role of pied piper.

Other parties have failed on this crucial front. In fact, AAP generated a lot of hope precisely because of the implicit promise of articulating an alternative narrative that defined nation in terms of justice, dialogue and fairness. Looking at AAP’s future in this light, there is no point drawing consolation in the fact that it’s a first-timer in the Municipal Corporation of Delhi polls and has ret­urned with 48 seats. The stakes for AAP were higher as the exp­ectations generated by it had a much vaster horizon. In this context, account also for the fact that the recent assembly bypoll in Delhi and now the MCD polls saw the Congress regaining some of its support base. 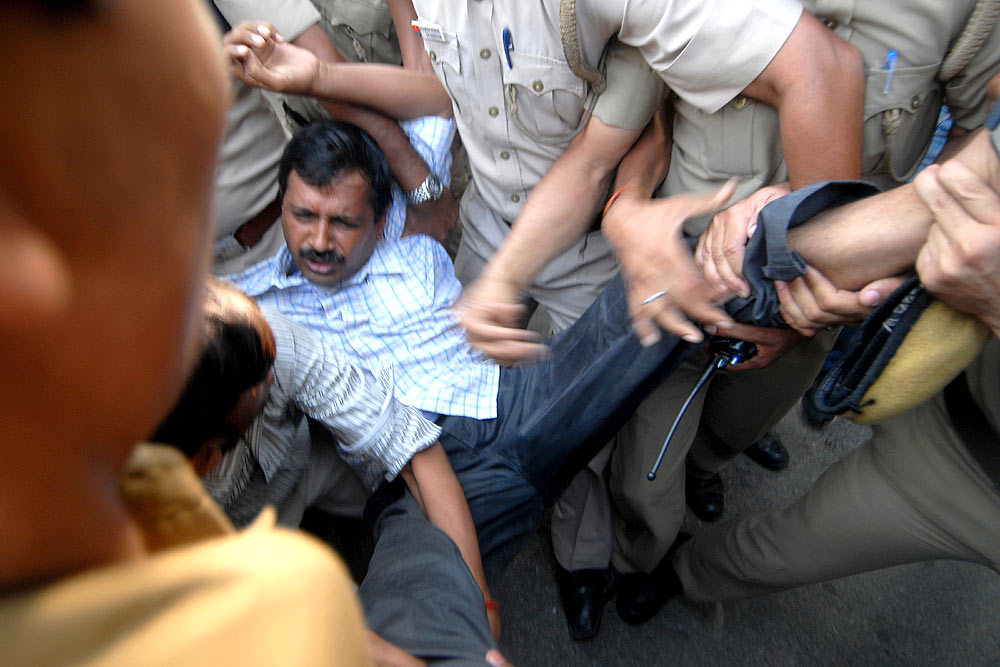 The street fighter Kejriwal during his IAC days

So, where does AAP go from here?

Going by the initial reactions of the AAP leadership, one can’t wager on any serious introspection. This leadership was progra­mmed in such a manner from the very beginning that introspe­ction comes last on the list of priorities. The party has already taken the line of externalising blame—on the voting machines. These EVMs might have genuine problems, but an exclusive tack of blaming them for crushing defeat in election after election is bound to be taken as a sign of stubborn immaturity. More dangerously (and I use this word with due care), the ‘EVM fraud’ line signals a self-righteous rejection of the popular will and human agency. After all, the very same machines can be ‘blamed’ for AAP’s historic victory in the 2015 assembly polls! AAP leaders may do well to concede that the fault lies not in the EVMs, but in their actions and ways.

In the first place, AAP was born of a movement that deftly exploited the popular frustration with the UPA government for less than noble, political ends. With all the hubris of helming the final, euphoric assault on corruption, neither the fantastic Lokpal nor its pious crusader—Anna (big bother) Hazare—are to be seen anywhere these days. In fact, one of those initial ‘anti-corruption’ crusaders is busy running a multi-million business in health and beauty products. Nothing surprising here, for the aim of the movement was never an assault on corruption; it was the removal of UPA and installation of a government dominated by the RSS, which has been achieved.

At one point, Arvind Kejriwal and his cohort shr­e­wdly distanced themselves from the so-called ‘Anna movement’—ostensibly mobilising social forces int­erested in a ‘different’ kind of political culture. One says ‘ostensibly’ because, from the very beginning, some disturbing trends were visible—disregard for democratic institutions, norms and procedures topping the list with self-righteous name-calling of critics coming a close second. Remember a sitting CM sitting on a dharna and declaring himself an ‘anarch­IST’? Anarchist is a philosophically loaded term and can hardly be deployed childishly as a self-desc­rip­tion by a constitutional post-holder sitting on dha­rna, demanding action against a police officer whose only fault was not to follow the illegal diktat of a minister prone to racist vigilantism. The media those days was busy turning Kejriwal and his colleagues into heroes and the then AAP leadership (including Yogendra Yadav and Prashant Bhushan), under the intoxication of TV, was happily turning a blind eye to this grandstanding and many other bothersome trends.

To their credit, AAP leaders presented a truly never-before scene, an unambiguously positive one, by saying ‘sorry’ to the people of Delhi after their first 49-day government (or lack of it) and were handsomely rewarded for it. And, in their second term, they also provided good governance, at least in parts.

So what went wrong? In the first place, by and by, they started shifting from the progressive, democratic and dynamic narrative they were supposed to project. Instead of orienting popular concerns in the right direction (a task that defines the difference between a ‘leader’ and a service provider), they chose the easy way of catering to fears and offering fantastic solutions. Admittedly, Delhi is notoriously insensitive to women. What is the real solution? A sustained sensitisation campaign on gender issues coupled with a strong law and order mechanism or the Orwellian nightmare of ‘big brother watching’? AAP, in spite of its enthusiastic, young volunteer force, chose to promise 15 lakh CCTV cameras instead of launching a sensitisation drive. A promise as stupid as it was impractical.

Again, full statehood for Delhi was a contentious issue. AAP chose to turn it into a plank for loud, cantankerous confrontation. But, having been humiliated in the assembly polls, the BJP and its government were hell-bent upon teaching AAP a lesson. The then L-G proved adept at being more loyal than the king, and the usually tardy Delhi Police showing rem­arkable agility in dealing with ‘erring’ AAP MLAs. And most importantly, the media by now had entered its ‘never-before’ phase and was hypercritical of AAP and hyper-indulgent of the BJP. Ine­vitably, AAP started losing its sheen, even though it was providing comparatively good governance.

Kejriwal and his cohort played only too eagerly, if unwittingly, into the BJP’s hands. The hyperactivity of Delhi Police was only matched by the deeds of the likes of ex-minister Jitender Tomar and his defence by the CM himself. Kejriwal’s frequent and shrill complaints about the L-G were no match for the latter’s shrewd, bureaucratic moves. The tendency to unreflective self-entitlement was again on disp­lay as Kejriwal virtually made Punjab his headquarters, and his party implicitly declared him as the super CM of Punjab in case of an AAP victory. After that came a cropper, as it was bound to, they chose to reduce the whole narrative of AAP to garbage and elimination of house tax so as to woo MCD voters.

A section of AAP’s leadership has for a while been showing distinct discomfort with a progressive, democratic narrative and indulging in right-wing rhetoric, rendering itself suspect in the eyes of the marginalised who had so enthusiastically moved to it. The personality cult has always been there and, magically managing another fit of overconfidence, AAP pinned its hopes on it again in the MCD polls, presenting the electorate with a binary choice bet­ween Kejriwal and Modi. Apparently, no lessons were learnt from Punjab, as ruefully pointed out by Bhagwant Mann, dismissing all the EVM-blaming.

AAP has so far relied on cult Kejriwal to take on cult Modi. Even on a purely pragmatic level, it won’t work, given the human, financial and media resour­ces at the BJP’s command. In a long-term perspective, it will signify the demise of the very idea of AAP. Fortunately, the latest drubbing has sparked some murmurs of dissent. AAP can turn these into the seeds of a serious introspection and seek to reg­ain its esteem. Conversely, it can go on walk­ing the dry, thorny road of relying on a personality cult, self-­righteous name-calling, expulsion of dissenters and sacrificing a holistic, progressive narrative at the altar of single-point obsessions of this or that kind, coupled with a rightward shift in the language of its luminaries who enjoy proximity to the ‘top boss’. The choices it makes will decide, in the near future, whether the AAP story of hope is over or not.

(The writer is a Bhakti scholar, novelist and literary critic)