Erroneous Zones Of The Citadel

The Vajpayee boat, with a tainted George on board, runs into shifting currents 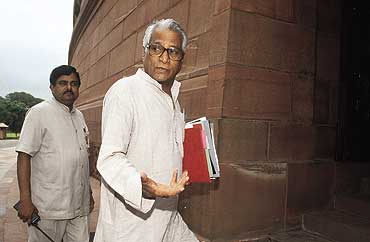 outlookindia.com
-0001-11-30T00:00:00+05:53
The crisis is claiming its victims. The manner in which nda allies forced the bjp to call off a series of rallies planned as part of the Tehelka counter-attack is the most stark example of the credibility crisis confronting the Vajpayee government. The ruling party was offering its most acceptable face and star speaker, Prime Minister Atal Behari Vajpayee. But there were no takers.

The dmk, tdp and jd(u) made it clear that they were in no mood to defend the indefensible and share the stage with "tainted leaders" like George Fernandes. The PM had to endure the ignominy of calling off a scheduled appearance in Hyderabad as tdp leader Chandrababu Naidu refused to share the platform. Home minister L.K. Advani and Fernandes ended up being the main speakers at Hyderabad. Vajpayee did, however, show up at Bangalore where, again, allies like the jd(u) didn't participate. The unkindest cut, perhaps, was the refusal of a staunch ally like the Shiv Sena to participate in the Mumbai rally where the PM was to speak. There were reports that even a minor ally like Naveen Patnaik's bjd was "not interested" in sharing the stage with Vajpayee in Bhubaneshwar. An embarrassed bjp was left with no choice but to call off the rest of the programme.

Stunned by the rebuff, George Fernandes may end up being the casualty of the upheaval in the bjp and the nda. Senior bjp leaders are speaking out against the wisdom of Vajpayee and Advani continuing to stand by George post-Tehelka. "Is it wise for the PM to give him a clean chit when there's an inquiry against him?" asks a bjp MP. Increasingly, bjp leaders feel the nda rallies had to be called off as the allies had a problem with George, not Vajpayee or Advani. With the damage control exercise coming apart at the seams, the ruling party has sunk into a deep depression. Party president Jana Krishnamurthy told Outlook that he's planning a chintan baithak (introspection session) later this year on the lines of the Virar session held over four years ago. "We've had no chintan baithak of the central leadership since coming to power. Introspection is necessary for an ideological party like the bjp. I think the time is now right to have another session where only the top leaders gather to plan the future course of the party."

But the immediate future does look bleak. The bjp and its allies seem poised to perform poorly in all the states where assembly polls are due next month. The party's hopes had been pinned on Assam where it's been trying to position itself as the number two player. But post-Tehelka, the party has been forced to go against its own instincts and tie up with a discredited agp to ensure that the anti-Congress vote isn't divided. Says a party general secretary: "The Congress is likely to win in Kerala and the Trinamul-led alliance will put up a good show in West Bengal. We've to try and contain the Congress in Assam. The state unit of the bjp has to sacrifice its interests for the national interest." But even before the assembly polls, the party is bracing itself for another stormy Parliament session when it resumes on April 16. Mulayam Singh Yadav's charge of phone tapping against pmo official Ashok Saikia has the potential of creating a huge furore, particularly if Yadav comes up with some sort of evidence. As of now, the PM appears to have decided to brazen it out, demanding that Yadav furnish some evidence before making allegations. The SP leader is said to be waiting for Parliament to meet before playing all his cards.

With Ashok Saikia's name being added to the list of controversial figures in the prime ministerial establishment, it is clear that Vajpayee's PMO will continue to be under attack—both from within the parivar and from the Opposition. Vajpayee has dug in his heels (his argument is that any concession will only weaken his authority) but the parivar hasn't let up on its invective. Last week, rss mouthpiece Panchajanya launched a clear attack on the Vajpayee regime. The cover story titled Kidhar chalee Bhajpa (Where's the bjp headed?) came up with a litany of complaints against the ruling party: post-Tehelka credibility crisis, indiscipline in state units, failure to project the party's achievements and no coordination between the party and the government. In a signed piece, Dhwaj jhuke nahin (The flag must not droop), editor Tarun Vijay made a veiled criticism of Vajpayee, arguing that no leader can ever be bigger than the party.

The fundamental dilemma confronting the bjp is whether the party can retain power without Vajpayee. A bjp ideologue says that it's clear that Vajpayee links the survival of the government to his own survival: "He doesn't care if the party goes after him. But the question is whether Vajpayee is such an asset after all these charges against his loyalists. And more corruption charges may come out in the coming months. We should start thinking of a future for the bjp after Vajpayee." Krishnamurthy in any case refuses to believe that the party's destiny is linked to a single leader. "Our party is not a personality-oriented party, though we have some outstanding personalities. The bjp has the inherent strength to project any leader. There is no shortage of leaders in our party," he says. Besides, the bjp is depending on the fickleness of public memory. Former vice president J.P. Mathur believes the Tehelka fallout is limited to urban centres. "There is no impact in the villages," he says. Moreover, he asks, "Is this one incident comparable to the Congress saga of 50 years of corruption?"

L.K. Advani has already spoken of the bjp setting its own house in order. The result is that conspiracy theories are no longer being cited for the mess the party is in. Instead, partymen are talking of spring-cleaning and a return to basic values. Says Krishnamurthy, "There's no doubt that partymen were shocked and dismayed by the recent exposures. We are taking steps to see that we don't face such an unpleasant experience in the future." These steps include a code of ethics for MPs, increasing the powers of the parliamentary board, greater transparency in fund collection, building support for state funding of elections and electoral reforms and increasing the scope of the Lok Pal Bill to include the PM.

The party, meanwhile, is gearing up for a rough ride in the coming months. There is a school of thought that Vajpayee will be more secure after the assembly polls. The logic is that a Congress upsurge and loss of power for allies like the dmk will only increase their stake in a central government. The tdp in particular, with 29 MPs, will do anything to avoid a mid-term poll or any return of a Congress-supported regime. The argument goes that Vajpayee has dug in his heels and is waiting to ride out the current storm in the belief that everyone will fall in line after a few months.

But in the midst of these mounting problems come reports that the PM's real weak spot, his knees, are again in trouble.Surgery will take place after a few months on the second knee. The last time Vajpayee was bed-ridden, the parivar was agog with speculation about his failing health and a leadership change. This time round, an already weakened PM will be even more vulnerable. Already, the old joke about Vajpayee is again doing the rounds—Vajpayee's biggest problems continue to be: right knee, left knee, Adva-nee.