With their villages flattened and heirlooms destroyed, Gujarat's artisans face a tense future 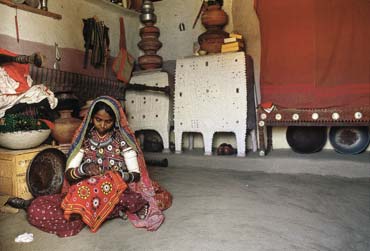 outlookindia.com
-0001-11-30T00:00:00+0553
In Shop No 55 at Dilli Haat, the capital's permanent crafts bazaar, the forlorn look in Champa's eyes says it all. Even the exquisitely embroidered mirrorwork pieces around her fail to liven up the sombre mood in the stall—she has just come back from her village near Anjar and is yet to come to terms with an uncertain future. "Whatever you see in front of me is all that I've got now. The earthquake has destroyed everything else," says she, trying hard to control her tears.

She was at Dilli Haat with five other families from Gujarat when the news of the killer earthquake came on Republic Day. All of them rushed back in panic and Champa is the only one to have returned. "There is no food, no house and all the 30-odd artisans in my village are badly affected. They are either injured or dead. I don't see any stocks coming from there in the next year or so."

Gujarat, and more specifically Kutch, also hosts one of India's richest concentration of craftspeople. From hand-block printing, bandhini, mirrorwork embroidery and shawl weaving to pottery and wood carving, the region showcases the best of Gujarati craftsmanship. According to a 1995-96 ncaer census, Kutch also houses approximately 52,290 artisans. Its 10 talukas include Anjar, Bhuj, Bhachau and Gandhidham, all of which have been virtually flattened. The survey also reveals that the worst affected districts of Kutch, Surendranagar, Ahmedabad, Rajkot, Jamnagar and Surat collectively account for about 87,000 of the total 1.5 lakh artisans in the state.

So far 62 craftspersons and weavers from Gujarat have been honoured with national awards and out of these, 33 come from the Kutch region alone. Says Laila Tyabji, chairperson, Dastkar, a society for crafts and craftspeople: "The environment is so hostile and barren in Kutch that almost everybody is dependent in some way or the other on the production and sale of crafts."

Preliminary estimates by the office of the development commissioner (handicrafts) are that more than 30,000 artisans have been severely affected in the killer quake. Says commissioner Tinoo Joshi: "The exact assessment will be possible only after restoration of all normal activities."

Their worst fears almost came true when television pictures showed the old township of Khatri Chakla in Bhuj, famous for its bandhini tradition, completely in ruins. Says Tyabji: "All five bandhini mastercraftsmen of the region live here and when I saw only one mosque minaret standing after the quake I thought this was the end of bandhini." Fortunately, all five of them are alive. But they are no less shattered—they've lost priceless heirlooms handed down from their forefathers.

The timing of the earthquake too has thrown the crafts calendar out of rhythm. December-March is the time when crafts bazaars are held around the country. While the Gujarat mela at Dilli Haat had to be cancelled, another at Gandhidham could never take place. "This is the peak time businesswise for these craftsmen. For all of them, a whole year's production and sales have gone down the drain. The quake has destroyed their entire economic structure," says Tyabji. For example, a small event like Nature Bazaar that Dastkar organises every year attracts 100 craftspeople, which traditionally includes 25 from Gujarat. But this year there is no participation from there.

Likewise, at the much bigger Surajkund Crafts Mela just off Delhi's limits in Haryana, Gujarati shawls have always been a big hit and the few lucky Gujarati craftsmen, like national award winner Vankar Hamir, who've made it to the venue this time, hope to do business anywhere between Rs 2-3 lakh. Masterweaver Hamir, along with three other "brothers" from Bhujodi village in Bhuj, could make it to the mela only because they sent their stocks on January 23, three days before the earthquake. Says he: "I borrowed money and could reach here only three days after the fair began." Yet to come to terms with their loss, the three share a stall in the mela because they "wanted to be together".

Hamir claims that of the more than 2,000 weavers in Kutch, not a single one has been able to make it to the fair this year. Surajkund, on an average, attracts 50 to 60 artisans from Gujarat but this year the number has come down to just three or four. Even those selling Gujarati crafts at the mela are largely Delhi-based agents who had already sourced their material in advance. Next year, they say, they might have to go to Rajasthan instead.

Bhuraji and his wife Dayaben, a national award-winner for soom embroidery from Tharad, a small village near Kutch, have also made it to Surajkund, their first trip in three years. But more than the business opportunities they are today worried about their friends and relatives in Bhachau. The destruction in Bhuj, they say, is bound to dry up their source of raw material.

The relief work, for now, is geared towards first providing those affected with food and shelter. Restoring their means of livelihood will come after that. And till that happens, Tyabji fears, these artisans might be forced into distress sale of under-priced crafts or their old heirloom pieces. But some initiatives have already begun with organisations like Dastkar and the development commissioner's office trying to mobilise funds to provide worksheds, looms and tool kits as soon as possible. The DC's office has proposed an assistance package for 5,000 craftspeople at a cost of Rs 5 crore. It has also given a grant of Rs 50 lakh to the Gujarat State Handicrafts and Handloom Development Corporation.

Says Anita, an artisan from a village three hours from Ahmedabad, "Some 75 per cent of artisans in any mela come from Gujarat. They are the raunaq (life) of every mela. But the earthquake has snuffed this life out". It might be a long time before colourful Gujarati handicrafts reappear at crafts bazaars throughout the country. For now, they stare at the geometry of ruin.