Dutt's okay, though the crime has ironically cost his pals dearer 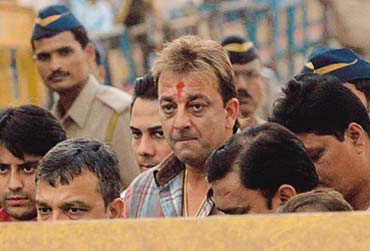 Thus spake Judge P.D. Kode on November 28, presiding over the 13-year-old Bombay blasts case, as he pronounced accused number 117 not guilty of conspiracy under TADA, not guilty of arms possession under TADA, but guilty of illegal possession of arms and weapons under sections of the Arms Act. The evidence put up by the CBI did not prove beyond doubt that the accused was part of the diabolical conspiracy to destabilise the city on March 12, 1993.

In the witness box stood Sanjay Dutt, film star of two decades, box-office darling, an unlikely onscreen Gandhian, a haunted 47-year-old man who had already spent 16 months in jail. Eyes focused on the floor, shoulders bent, hands locked behind his back, memories of his late Congressman father perhaps crowding in. It took a moment for the verdict to sink in, then he heard what he so ardently wanted to hear: "I have not found him to be a terrorist." Judge Kode's words blunted the implications of his conviction under the Arms Act.