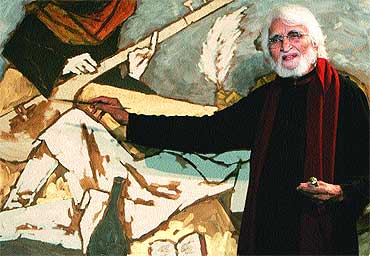 Maqbool Fida Husain
By K. Bikram Singh
Rahul and Art Pages: 395 ; Rs. 9,999
If any artist is more present in India today, even though he lives in self-imposed exile in Dubai, it is Maqbool Fida Husain. Whether it is in auctions or exhibitions or simply in people’s homes, his memorable images make their way to the viewer and provide an entry into contemporary Indian art. It was high time there was a comprehensive book chronicling his work from the beginning to now. This handsome volume, written painstakingly over two years by the former civil servant, filmmaker and art lover, Bikram Singh, not only fills this vacuum but is written in a manner befitting the artist’s own approach, accessible to both the connoisseur as well as the lay person.

The book has a vast array of styles and visual metaphors coinciding with many events from Husain’s 93 years. He has always been a people’s man, whether painting cinema hoardings as a young, aspiring artist or sitting in a wayside tea shop and having his ‘chalu chai’. Now, we discover that he had a favourite haunt in each city, be it Mumbai, Delhi, Calcutta or Indore, where he had his tea and bun and watched the world pass by. It is these nuggets which poignantly bring home the fact that the artist’s work often drew from these daily interactions with the man on the street and in that sense he is unique.

If anything is indicative of Husain’s galloping style, it is horses. These came to be his leitmotif as he journeyed through life, each stage reflecting multiple streams of influences and thoughts. The archaic form metamorphosed into the gyrating animal in the fifties, exuding power and sexual prowess in the sixties, cutting diagonally across the canvas in the seventies and continues to dart, followed by other horses, since then. In the newest avatar in the Al Arabia series, horses radiate in all directions, covering all corners of the world. As a young boy, we are told, Husain would be fetched from school by his grandfather Abdul Husain, a tinsmith. Often on their way back, they would stop at the workshop of the farrier, Acchan Mian. While the two men sipped their tea, the boy would stare transfixed at the horses being fixed with iron shoes on their hooves.

Women have played a big part in both Husain’s life and paintings. His long relationship with a Czech woman, Maria Zourkova, since the mid-fifties inspired paintings of rare quality and even more intense verses of poetry. The besotted Husain wanted to marry Maria, but she eventually called it off because she felt it wouldn’t work, given their different cultures and her unwillingness to shift to India. Husain continued to visit her in Prague until she married and left for Australia. During the years they were together, he gifted her more than 60 of his paintings. And when they were migrating to Australia, Husain flew to Prague especially to clear the paintings through customs. Two years ago, when Maria decided to move back to her own country, she returned all the paintings he’d gifted to her, valued at millions of dollars.

Husain’s paintings of the Ramayana and Mahabharata are well known. As a young boy, he was a regular at Ramlilas; and he engaged a pandit to recite the epic to him before painting it in 1968. People forget when they attack him for vilifying the Hindu religion by painting nude goddesses that he paints them as an insider. Having grown up as part of a composite culture, both in Pandharpur and Indore, Husain paints goddesses according to the temple tradition; as divinities and not as ordinary mortals.

Right from that memorable painting, Man (1950), which reflected the chaos and sadness of a world turned upside down to the multipolarities of the present works, Husain has remained a man eminently in tune with the times, matching the speed with which it is changing. Living in Dubai, Husain undoubtedly misses his friends and home. But for us, it is an irreparable loss: not only because his vast repertoire of paintings have reportedly been taken away to Dubai to ensure their safety, but also because of the big hole he has created in our artistic life without his presence, barefoot and kurta-clad, everywhere at once. The book measures the grandeur and generosity of the man now permanently lost to the country.