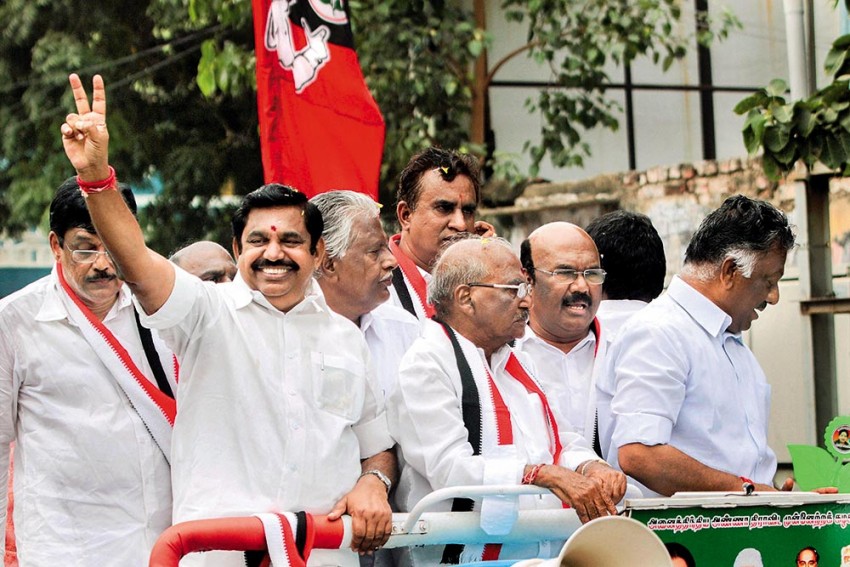 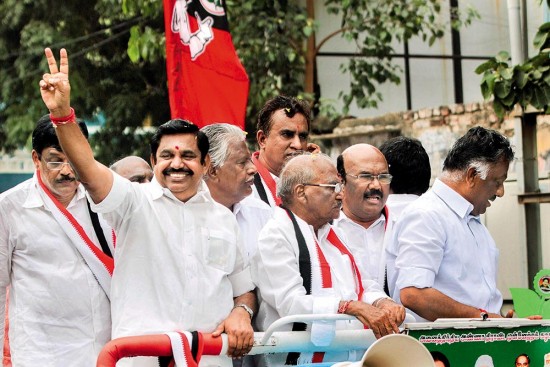 When it came to Tamil Nadu, the 2014 parliamentary poll was chiefly a duel among three: Modi, Lady and Daddy. That is the prime minister, the (then) AIADMK supremo and the DMK patriarch respectively. In the end, J. Jayalalitha swept the elections, winning 37 out of the state’s 39 Lok Sabha seats, earning Narendra Damodardas’s NDA two (BJP 1, PMK 1) and leaving octogenarian M. Karunanidhi with zero.

Today, Modi is all set to take another shot, while the lady is no more and daddy has retired from politics. Instead, a whole array of new players has entered the Tamil Nadu fray: the ruling AIADMK’s political twins with rhyming initials (EPS and OPS), their former master-turned-challenger (T.T.V. Dhinakaran), the daddy’s son who holds the party’s mantle (M.K. Stalin) and two superstars who now want to be political leaders (Rajinikanth and Kamalahaasan).

To start with, the BJP is certainly not a favourite in Tamil Nadu, where Modi’s ratings will compare poorly with his standing elsewhere in the country. The saffron party has itself to blame for its wobbly presence. For one, the NDA government is widely perceived as the protector of a highly unpopular state government led by Edappadi Palanisami and O. Panneerselvam who led two warring factions of the AIADMK. This had spread public dissatisfaction, which Dhinakaran cleverly exploited during the RK Nagar byelection as the rebel AIADMK leader repeatedly dubbed the present state government as a proxy of the BJP that rules the Centre.

The BJP has also been portrayed as an enemy of regional identity and state autonomy—two main ingredients of Dravidian politics in the state. State BJP leaders argue that regional parties whip up new issues just to keep up the bogey of parochialism. “Even the Supreme Court’s diktat making NEET compulsory for medical admissions was wrongly painted as the handiwork of the BJP government,” says BJP spokesperson K.T. Raghavan. “Unless they keep whipping up emotive issues the regional parties cannot survive in Tamil Nadu.”

Another major drawback for the BJP has been the absence of a credible local leader. The state leaders keep contradicting each other in their hurry to appear before TV cameras. Even as the party’s state president T. Soundararajan flayed the steep hike in bus fare, Union minister Pon Radhakarishnan justified it, saying fares had not been hiked for seven years. Even the Central leadership does not take the Tamil Nadu unit seriously: party national president Amit Shah having twice cancelled his visit to the state on realising that there was very little for him to build upon.

The BJP can only hope that if the current EPS government falls in the next six months, then state elections could be held along with Lok Sabha polls. That would make the BJP a more attractive ally for the AIADMK or even Rajinikanth and sma­ller parties like the PMK, according to observers. Modi’s campaign would neutralise any negativism the regional parties have spread against the BJP, says party leader H. Raja. Also, a spell of Governor’s rule would enable the party-led Centre to show a relatively corruption-free administration in the state.

Being the ruling party, the AIADMK should be calling the shots. Instead, self-doubt plagues it, especially after finishing a poor second behind Dhinakaran in RK Nagar. While no AIADMK legislator wants a mid-term election now, the sta­bility of the EPS-OPS government hinges on a High Court verdict: one over the disqualification of 18 MLAs of the TTV faction. But chief minister EPS is confident that even if the disqualified MLAs return to the Assembly, they wouldn’t want to bring down the government as they too would not want early polls. “Even these disgruntled legislators are ready to make peace with us so they can carry on with their consti­tuency work, which has been disrupted now,” says a senior minister. Rajini and Kamal (in pic) are hoping that their cinematic popularity will propel them towards victory in the elections.

EPS, being a pragmatist, is going ahead with welfare measures Jayalalitha had announced ahead of the 2016 assembly polls. With great fanfare, he is rolling out the subsidised two-wheeler scheme for women. He is also pushing to hold local-body polls, feeling TTV would find it tough to replicate his RK Nagar victory across the state, especially when he is ranged against the Two Leaves symbol of the AIADMK in more than 2,000 seats. If he can establish the numerical superiority of the AIADMK across municipalities and corporations, he would have an upper hand for the 2019 Lok Sabha elections.

“EPS lacks the charisma and freshness that Dhinakaran commands, but the CM has proved to be a great survivor,” explains political commentator Ravindran Durai­swamy. “He would use the party machinery and government schemes to overcome this disadvantage. Also, a longer reign by the EPS government will gradually weaken Dhinakaran as more dissidents would gravitate tow­ards where power is located. So EPS could actually find himself politically on a stronger wicket than TTV to face the Lok Sabha polls.”

Dhinakaran has been facing an existential crisis even after his thumping RK Nagar win. He is unable to float a new party as the 18 dissident MLAs fear that this would rob them of their assembly seats under the anti-defection law. But he needs an identity for his outfit to fight the civic and parliamentary elections. So his role in the Lok Sabha election would be decided only by the HC’s verdict on the 18 MLAs. Till then, he can only be an independent MLA from RK Nagar.

The present political confusion in the AIADMK should have actually energised the DMK to chalk out its battle plans for the Lok Sabah polls. Instead, its leader Stalin is busy holding closed-door meetings with his district functionaries to hear their grievances about the way the party is being run. The manner in which the DMK lost even its deposit in RK Nagar has left the party in a stupor. It has become uncertain about its electoral prospects. “The DMK has been unable to attract the young voters who are crucial for any Opposition party,” admits a senior DMK legislator. Stalin’s plan to rope in his son Udhayanidhi “is only a sign of desperation” as the producer-­actor “commands hardly any fan following.”

Rajini and Kamal are hoping that their cinematic popularity will propel them towards electoral victory. Until they launch their parties, list out their priorities and hit the campaign trail, their optimism cannot be quantified.

So Tamil Nadu could be facing its most fissiparous Lok Sabha elections with no powerful leader at the helm of any party. Truth is every party is unsure about its chances. So much so even a Congress veteran like P. Chidamaram in a recent interview would only state that if elections were held today the AIA­DMK would be defeated. He would not predict that the DMK-Congress combine would win.

A Gateway To Reclaim