Epic On A Grain

For a sloppy PDS, the smart card is the perfect remedy - hopefully 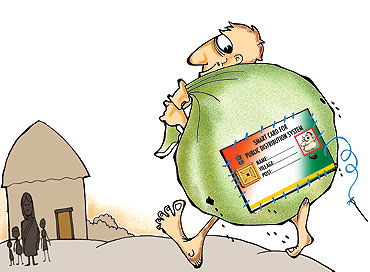 Three years of endless presentations before the Planning Commission, then a World Bank-funded feasibility study, and now a pilot project—the 'smart' ration card has been a while in the making. But later this year, when the government finally rolls out these plastic cards in Haryana and Chandigarh, it would mark a long-overdue step in plugging diversions and overall shoddy management in the public distribution system (PDS). And if the Union finance ministry's plan comes to fruition, PDS consumers will have alternatives to the network of 4,89,000 fair-price shops in the country.

Embedded with a microchip that can be updated with data—family history, fingerprints, credit availability and so on—the new smart card is expected to not only establish the identity of the user, but also provide cashless services while helping the authorities to track usage. "Hopefully, in one stroke the government will be able to plug the leakages, root out corruption in the FCI (Food Corporation of India) and, above all, empower the beneficiaries to get their money's worth," says Rajiv Kumar, CEO of ICRIER, recalling graciously that the idea germinated from Wipro's Azim Premji. Later, Kumar followed it up through the corridors of the Department of Economic Affairs and the Planning Commission.

To be sure, it's not the first time smart cards have been used for government projects. States like Kerala and Andhra Pradesh have, over the past few years, experimented with equipping BPL families with smart cards, including for PDS purchases—and with mixed results. Says Sudhir Rao, managing director of Bartronics India, a listed smart card manufacturing company: "Many state governments have been utilising smart cards for projects like pension, driving licence and PDS. The response, however, has been mixed due to lack of user education on why they need to carry the card. In the case of PDS, familiarity with the shopkeeper helps them get the transaction done without showing the smart card."

The new card is expected to be modelled on the one recently designed for the National Health Insurance Scheme for an estimated 6 crore BPL families in the unorganised sector (see box). What's going to be different this time around, explain officials, is the use of the smart card as a cashless tool that will empower poor people to choose a service provider of their choice and also help government keep track of the system on a near real-time basis. "Working on the system of food coupons that can be used in grocery stores, the government will empower poor people with the smart card that will give them the choice of buying foodgrains from any of the approved private stores, which will then be reimbursed," reveals a senior finance ministry official.

In sum, the new PDS system will help cardholders avail of services in private stores that agree to become members in the scheme. There would be a provision for regular charging up of the card balance, according to the finance ministry, which is formulating the scheme.

The private stores would benefit through larger volumes of business. For the government, it would translate into better accountability and less pilferage, damage and carrying cost of foodgrains.

For now, the plans for the pilot scheme have taken the food ministry by surprise—it's clueless about how it will work. "For the system to work, we need to computerise the whole PDS system. That is still to be done," points out a senior food ministry official.

Authorities in both Haryana and the union territory of Chandigarh are also awaiting instructions from the central government on how the smart cards pilot will operate and its impact on the existing PDS depots. Some work has begun. It is learnt that Haryana and Chandigarh have estimated a need for 10,000 card-readers for the pilot project. The local governments are also not clear about the funding pattern and modalities to get the cards made.

Meanwhile, Haryana is putting the finishing touches on a coupon scheme for PDS in two districts—Sirsa and Mewat—to be launched by May-end. Already the ripples are being felt, and depot holders are wary of how things will pan out. As an official reveals, depot holders have become financially dependent on the widespread diversion of PDS items to the open market. "If they don't do this, no depot holder can earn more than Rs 1,000 or 1,200 a month from PDS. This is why we allow them to use their premises for retailing non-PDS items. But diversion is a more lucrative and easier option," he states. Haryana has about 11 lakh BPL or Antyodaya families who get rice, wheat, sugar and kerosene on their ration cards.

The food and supplies department in Chandigarh is, meanwhile, computerising its database of ration cards to prepare for the smart card scheme.

Of course, it remains to be seen how well the system eventually works, given the past experiences with smart cards and the proverbial 'Indian ingenuity' that can put paid to the best of schemes. However, there's no doubt that a lot is riding on this pilot project, particularly for those who never seem to get the subsidised food meant for them.