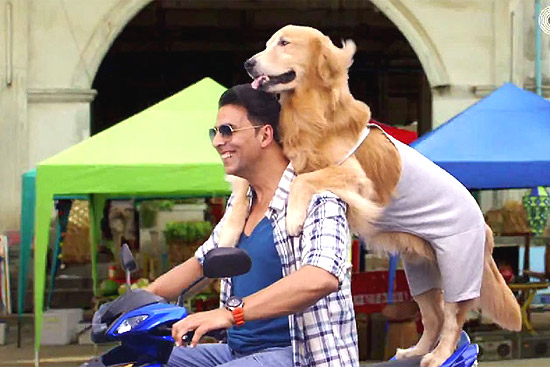 The title of Sajid-Farhad’s debut film got changed from ‘It’s Entertainment’ to Entertainment. Lest you think the name proclaims what the director duo aim to offer to the audience, do stand immediately corrected. It’s actually the name of one of the film’s protagonists, a Golden Retriever. Not only is the film named after the character the dog plays, but Junior, the wonder dog who plays the role, finds its name up there on the credit roll. It’s a different matter, however, that the insecure human hero does his best to steal the screen time from right under the poor dog’s nose. So, despite the due credit, the dog doesn’t quite have his day like a Brownie of Teri Meherbaniyaan or a Tuffy of Hum Aapke Hain Kaun. And we aren’t even talking of Hollywood that has had more than its fair share of Benji, Lassie, Beethoven and Marley. The only silver lining, perhaps, is that Junior is much better off than the film’s entirely inconsequential heroine, Tamannaah.

So would you like Entertainment if you are a dog lover? Not quite. Would it appeal to the child in you? Again, not quite. Yes, it’s pointless to look for logic in a film about a man fighting with a dog over his rightful inheritance. However, it’s only too fair to ask for some inspired madness and sublime stupidity, both of which go disappointingly missing in the banal, boring film.

Akshay needs to get rich quick to claim his lady love, Tamannaah. Luckily, he hits upon a locket, some letters and pictures and realisees that his father is not his real father and that he is actually the illegitimate son and heir of a billionaire in Thailand. Even more luckily for him, his billionaire dad passes away and Akshay merrily goes off to foreign shores to stake a claim at the fortune and become a “slumdog billionaire”, only to find that a dog, the billionaire’s pampered pet, has already overtaken him in the takeover battle. He starts off by trying to kill the dog but when the real villains, Sonu Nigam and Prakash Raj, arrive on the scene, he realises that the dog is ultimately his best friend.

What could have been a fun flick gets drow­ned out by the usual slapstick, loud and hammy acting, cringingly incorrect humour and corny lines. How long can one keep laughing at scenes of crotch-biting? And find referencing to Karan Arjun or Sanjay Leela Bhansali, Anupam Kher or Pankaj Udhaas, Prabhu Deva or Mahima Chaudhury hilarious? How long before we stop joking about the physically challenged and the dark-skinned? And how long would we keep seeing potshots being taken at Ektaa Kapoor brand of TV serials in the same old repetitive manner? Time to rethink on entertainment.