Not only do they have indubitably unique sound, old vinyl records effortlessly summon up the past in a whirl of tactility and art.

My eyes light up as I espy the instantly recognisable album cover in a stack of old vinyl records on display on a pavement along Lenin Sarani near Esplanade—the oldest part of British Calcutta where centuries-old neo-classical and neo-gothic mansions cling on still to a shabby-genteel colonial grandeur. “It’s the Dark Side of the Moon!” I whisper to myself as I ogle covetously at the single beam of light diffusing into coloured rays against a black background. Finally, the Pink Floyd album I longed to own.

This was in 2005. Just about a year ago, I had inherited an old record player from an aged relative. I got it repaired and used it to play the batch of records I inh­erited with it—Bollywood albums and LPs by Bengali legends like Hemanta Mukherjee, Manna Dey, Shyamal Mitra and Sandhya Mukhopadhyay. Some vinyls were albums of Rabindrasangeet.

Much like Darjeeling tea, the sound of vinyl­—a warm, crackling wave that envelops you in light warmth—is a matter of acquired taste. In depth and timbre, it outperforms the digital accuracy—a cold, met­allic gleam skimming the surface of sou­nds—of CDs. Records have an in-bu­ilt intimacy to them; it’s like listening to live music. Vinyl production in India stopped in the early 1990s; imports stopped soon after. But the sellers on Lenin Sarani and Free School Street kept the supply chain alive by sourcing used records, and keeping them clean and scratch-free. Of course, vinyl has immense staying power too—encased in its cover, covered by the clingy, thin plastic, it shrugs off the decades. Every one of them that I own were made before my birth. It fell victim to our headlong rush to embrace new technology, before it rec­laimed us again with its aural—and aesthetic—superiority.

On that blessed 2005 day, I casually asked the seller the price of the Floyd: “How much?” Rs 500, he replied. I faked disinterest, and looked around. As the sun shone on my shoulders, I chanced upon John Denver’s Greatest Hits. I drove a hard bargain, and returned home with both for Rs 400. I knew I had to come back. Queen’s 1980 album The Game was added to the haul soon. 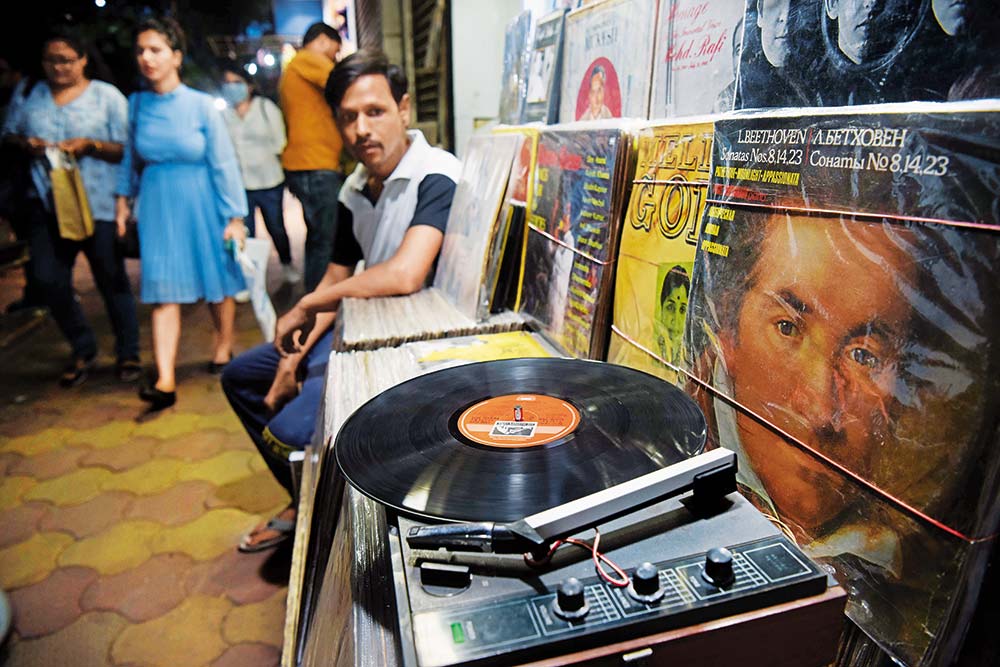 There were more pavement sellers of disked gold—I remember four on Lenin Sarani and three on Free School Street. Buyers, mostly middle-aged and the eld­erly, were a motley crowd. One came from 100 kms away to collect records for his ailing mother. Another one bought LPs just to keep his turntable in working order, for it represented a time he wan­ted to preserve for the next generation.

When Outlook photographer Sandipan Chatterjee spotted an LP of the album from the Bengali film Sany­asi Raja on Free School Street rec­ently, the cover took him 50 years back, when he was a todd­ler—his father’s new, British-made Garrard 3000 turntable took centrestage in their joint family on holidays. Sanyasi Raja was often played. His mother would play it to lull him to sleep. It transported him to his childhood. “Every record has perso­nal memories attached,” says Sandi­pan.

It’s the thing about vinyls—they are pressed repositories of a disappeared way of living, and so a favoured fount of nostalgia. Many of us drink from it once removed, lured by the aura of mature cool, immortal cover artwork, exquisite sleeve notes—propelled anew by its resurgence in the West.

A second-hand record store tells you about the music a town once heard. By that reckoning, Calcutta from the ’50s to the ’80s heard Bengali and Hindi film music, individual filmy albums of playback singers, and a lot of Western and Hindustani classical music, operas and Western pop and rock in all their bewildering hues. Pop mainstays like ABBA, Boney M, Bee Gees, Neil Diamond, going as far back as Jim Reeves, Connie Francis and Dean Martin are found in abundance, costing between Rs 300-Rs 700. Albums with immortal art that sticks out like the pyramids—Cream’s Disraeli Gears and Yardbirds’s Little Games, say, or Jefferson Airplane’s After Bathing at Baxter’s and the Beatles’s Sgt Pepper’s, are rarer still.

Bengali and Hindi records are cheaper, unless, say, it’s a film with R.D. Burman’s music or Jagjit Singh’s Arth. “You don’t get The Burning Train for cheap. Peo­ple love hearing it on a record player,” says Danish. Their relatively high prices are justified, says Tarakeshwara Rao, owner of another Free School Street shop. “Keeping them in good condition requ­ires care spanning years. Buyers are few. We are preserving something they don’t make anymore. The value is sentimental.” In short, a nursery for nostalgia.

Just as we speak, a couple stops by. “Look, Riju, a gramophone! You would not get to see it again!” says the man to his son, aged five or six. The boy, uninterested, drags his father away. It’s a safe wager that the 1974 Joan Baez album that I bought last week for Rs 500 will continue to sing of diamonds and rust even when Riju grows to be my age. Maybe by then he’ll see the point of nurturing these past relics—perhaps only for the sake of good music, or as homage to vanished generations who trod the same streets, under the same skies.

(This appeared in the print edition as "Of Diamonds And Rust")

By Snigdhendu Bhattacharya in Calcutta