The Mahagathbandhan Of Cinema And Electoral Politics

Ahead of the general elections due this summer, filmmakers of all hues are outdoing each other to rustle up a political biopic or a quickie on a contemporary event, with an ostensible agenda of influencing the great Indian electorate. 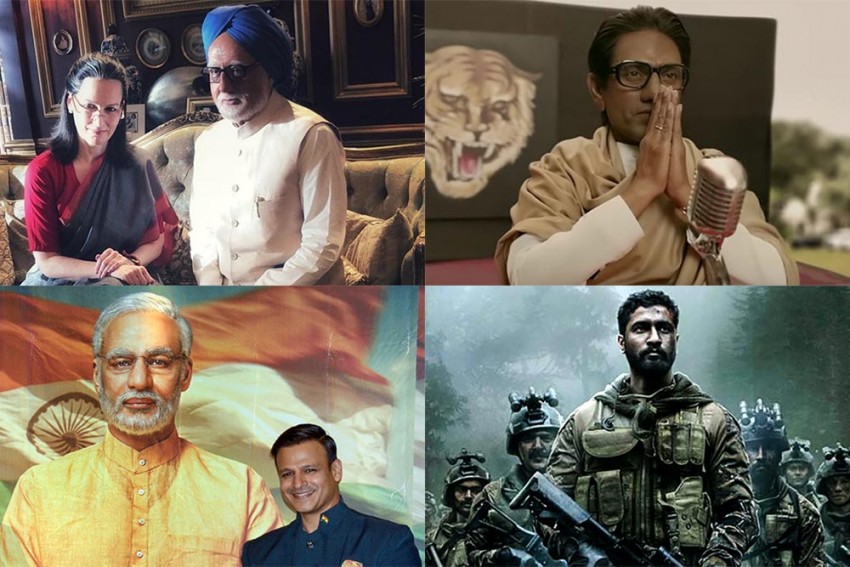 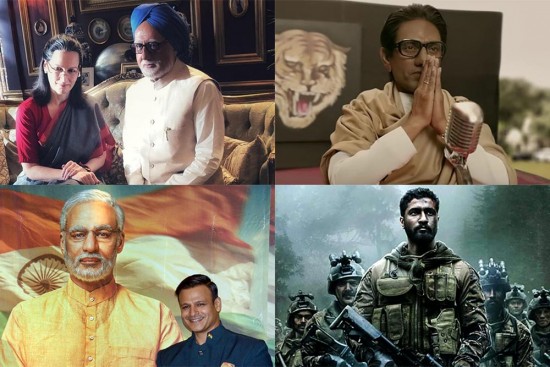 There was a time when the neta was a staple stock Bollywood character—a kurta-waistcoat, Nehru topi-wearing scheming caricature of corruption. He got lost somewhere between multiplex-friendly plots and a new wave of content-driven cinema. But a resurrection is underway. And as the lines between fact and fiction are overlapping rapidly in our post-reality age, India’s film industries have been busy churning out a new formula—the neta biopic, along with other films with a sprinkling of our politicos. It phases out the stock characters and oblique references to politicians with promise of the real stuff: our netas, up close and fact-fictional. The timing is opportune too.

Ahead of the general elections due this summer, filmmakers of all hues are outdoing each other to rustle up a political biopic or a quickie on a contemporary event, with an ostensible agenda of influencing the great Indian electorate.

While some of them are unabashedly hagiographic accounts intended to lionise the central protagonists, dead or alive, others are downright hatchet jobs executed with clinical precision to mock them. But the overall objective is identical in either case: proffering propaganda in a glossy 70mm package for handsome returns at the hustings, if not the box office.

B-town is currently awash with all things political, having ushered in the New Year with two pol­itical subjects: The Accidental Prime Minister, based on a controversial book of the same name on former PM Manmohan Singh by his erstwhile media advisor Sanjaya Baru, and Uri, a high-­octane account of the Indian Army’s much talked about surgical strikes in September 2016.

Also in the works are two biopics on none other than the Prime Minister. Vivek Oberai stars in one—Modi, an ambitious project expected to hit the screens in 23 different languages before the parliamentary polls. Almost simultaneously, veteran ­actor-turned BJP politician Paresh Rawal has announced another project on Modi. Also set for release is Thackeray. The biopic on Shiv Sena’s founder features Nawazuddin Siddiqui in the eponymous role.

Unlike Hollywood, where political biopics have always flourished, Hindi cinema was wary of this genre in the past in view of the perceived disinterest of audiences, unnecessary legal hassles and the fear of a backlash. Barring an Aandhi (1975) here, a Kissa Kursi Ka (1978) there, and at most direct, the melodramatic 1984 Rajesh Khanna-starrer Aaj Ka MLA Ram Avtar, only few films on politicians were attempted. But today’s filmmakers are not averse to even turning the pages of history to dig up a riveting political plot with the hope of making the most out of the election year.

Director Vivek Agnihotri, known for wearing his strong beliefs on his sleeves, for one, is coming up soon with Tashkent Files, based on former PM Lal Bahadur Shastri’s ‘mysterious’ death overseas. The movie is also expected to release pre-poll, in February-March. Agnihotri, however, insists that he is not racing against the clock to ensure its ­release before elections. “I had announced it last year,” Agnihotri tells Outlook. “It is, in fact, the outcome of the four years of extensive research. I filed 25 RTIs, went through numerous Parliament files, visited Uzbekistan and studied a lot of things for it—the CIA and KGB angle et al. All I can say that this film is going to change the political narrative of the country.” Agnihotri hastens to add that the movie is not a biopic on Shastri. “It’s rather a murder mystery in a contemporary setting.”

Critics attribute the reason behind the sudden spurt in such films to the political agenda of either the filmmakers themselves or the people funding such projects. Thackeray, for instance, has been written and co-produced by Shiv Sena MP Sanjay Raut. A similar motive has been attributed to the makers of The Accidental Prime Minister starring Anupam Kher as Manmohan Singh. 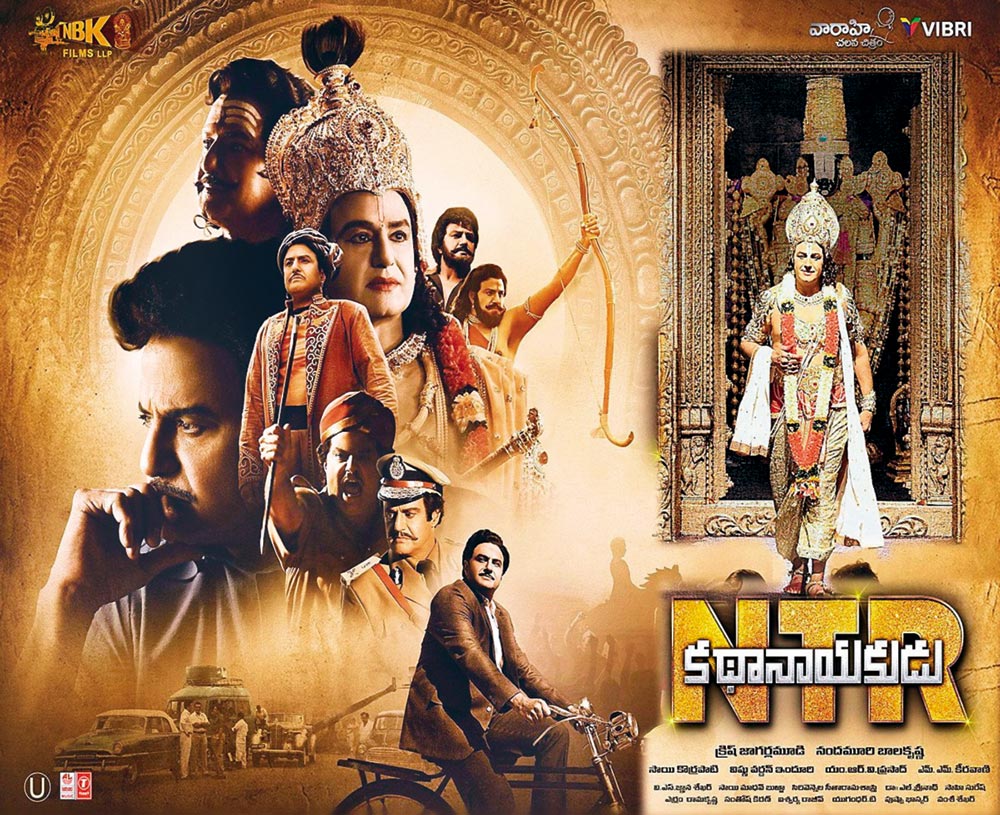 Political biopics are the flavour of the election season not merely in Hindi cinema but also entertainment industries on the other side of the Vindhyas. N.T.R. Kathanayakudu, a Telugu biopic of former film star-turned-chief minister N.T.R. has already hit the screens. On February 8, its second part, NTR Mahanayakudu, tracing the legendary actor’s transition from films to politics in the 1980s will see the light of day. The film stars NTR’s son, Nandamuri Balakrishna, in the titular role.

The two-part biopic may or may not boost the fortunes of the Telugu Desam Party (TDP) founded by NTR, but there could not have been better timing for their release. Like most political ventures, the film also has a rival. A YSR Congress leader, has already initiated the counter-attack by producing Lakshmi’s NTR, another movie on the late Andhra icon. Directed by Ram Gopal Varma, it will—as its title suggests—explore NTR’s marriage with Lakshmi Parvathy, which subsequently led to the split in the party.

YSR Congress also has its own hagiography—Yatra, a biopic on party founder and former CM, the late Y.S. Rajasekhara Reddy. Ready for release on February 7, it has Malayalam superstar Mammootty playing YSR. 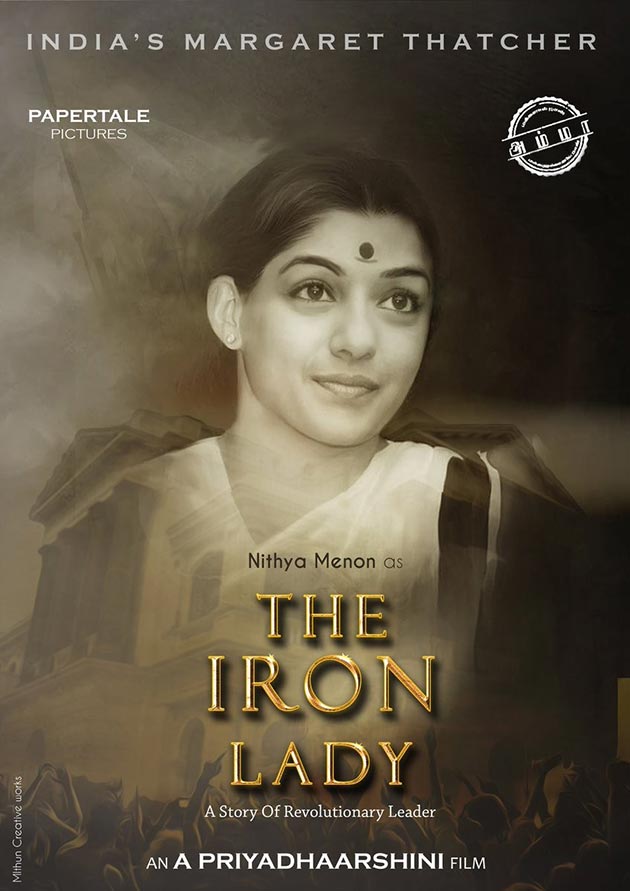 In adjoining Tamil Nadu, a biopic on former CM, the late J. Jayalalitha, starring Nithya Menon, is in the pipeline. Directed by A. Priyadharshini, The Iron Lady has been planned as a multilingual. Its shooting will commence on the birth anniversary of Jayalalitha on February 24.

“Such films can be ­made only if they are ­favourable to the ruling dispensation because the censor board is run by it.”

In recent years, Hindi cinema has shown a rem­arkable predilection for biopics on contemporary figures. From Mary Kom (2014) to M.S. Dhoni: An Untold Story (2016) and Sanju (2017), life stories of many celebrities came out. But the politicians were left alone, with the exception for Madhur Bhandarkar’s Indu Sarkar (2017), which talked about the Emergency. Now that cinema has ­entered the politician sabha, where there is no dearth for content for sure, will The Accidental Prime Minister and others set a lasting trend? Poised at an interesting outsider-insider position, German-born actress Suzanne Bernert, who plays Sonia Gandhi in The Accidental… thinks so. “I am sure it will open the floodgates, not merely the door,” she says. (See interview)

Trade experts, however, beg to differ. “The audiences, in general, do not like a political film,” says Atul Mohan, editor of Complete Cinema. “You cannot interpolate drama, comedy or an item song in a real-life narrative to make it appealing for an average audience.”

Mohan avers that Uri clicked in a big way because it had enough action drama to keep the audience on the edge of their seats, “otherwise most of the ­political films have dry subjects.”

An average Bollywood producer, Mohan feels, steers clear of a political biopic because of the sensitive nature of the subject. “Besides, it is not easy to get funding for such risky projects. They can be made only if they are favourable to the ruling dispensation because the censor board is invariably constituted by it.”

Film writer Vinod Anupam believes that political biopics are at best a passing fad. “It is purely a seasonal affair. Such films will come and go and they will never be accepted by the mainstream cinema,” he insists. “There is no market for such films here. Look at the timing and the people behind these films. Had they been released at any other time, we would have given them a benefit of doubt but in an election year, they all appear to be nothing but propaganda films. This is despite the fact that such films hardly influence the voters. Did Kissa Kursi Ka influence even one per cent of the votes in any post-Emergency elections?”

The National Award-winning writer says Bolly­wood has made the maximum number of biopics on Bhagat Singh only because of the high drama in his life. “They are yet to make an authentic biopic on Gandhi and Nehru, let alone the lesser mortals. And it was a government agency (NFDC), which financed biopics on Ambedkar and Sardar Patel.”

Moreover, Anupam wonders, what they can show in a film on contemporary leaders or subjects which are still fresh in people’s memories. “Can they show in Mumbai what should be shown in a Thackeray biopic?” he asks. “And pray, what was so new about the existence of a parallel power centre during the UPA regime, as depicted in The Accidental Prime Minister, which the audience did not know in the first place?”