Art is a form of thinking. In a world where ‘fake news’ dismantles ‘facts’, art is another way to uphold the storytelling that is journalism’s soul.

“Even in the darkest of times we have the right to ­expect some illumination, and that such illumination may come less from theories and concepts than from the uncertain, flickering, and often weak light that some men and women, in their lives and works, will kindle under almost all circumstances and shed over the time-span that was given them on Earth.”

“What is to be done” is a sentence I have often wondered about. In every aspect. In his What Is To Be Done? (1902), Lenin argued that fighting economic battles with employers over wages and working hours won’t make the working class political. But that’s not where I came across the sentence. I found it while reading about the Russian art collective Chto Delat (What is to be done?). Since its foundation in 2003, the collective has published an English-Russian newspaper with a special focus on the re-politicisation of Russian intellectual culture. One of their early works, ‘Builders’ (2004-05), had five artists restaging a painting. Four men and a woman, all workers, pose during their break against the distant backdrop of Viktor Popkov’s ‘Builders of Bratsk’ (1961).  The idea was to retest the meaning of here and now. Sixty years later, the act of repetition made it possible to re-evaluate the meaning of labour and community in the new post-communist reality, a revelation of disappointment in the very bold promises of the arrival of democratic order in the early 1990s.

We live in the same world. We believed in the same promises. We have similar disappointments. In fact, the collective was formed as a response to these broken promises.

For Chto Delat, art was a necessary evil where they used it to produce political effect. Art is necessary in our times to say more, to show more and to make us see more. Over the years that I have ­covered art, I have come across a lot of work that ­reminded me of the old promises of journalism that now stand broken. Among them was the ‘Sea of Pain’, a 2016 installation at the Kochi-Muziris Biennale by Chilean poet Raul Zurita.

In that small town by the sea, we waded into the make-believe sea to read the poem that was displayed at the end. Zurita named it the ‘Sea of Pain’.

“No one can mimic his final image moored face down at the water’s edge. No artist can provide that low blow. Ah, the world of art, the world of images, billions of images. The words of a poem are cleaner, more pure,” Zurita wrote.

Zurita offered no answers in a post-truth world. He only offered words, a sea, an art installation.

He had flowed seawater into an old warehouse at Aspinwall at the third edition of Kochi-Muziris Biennale, and in this sea he conjured a multitude of seas and deaths he had witnessed for years in Chile where he was born in 1950.

The poem was an ode to the Syrian refugee child who had drowned. He had read about Aylan Kurdi in the newspapers, heard about the drowned ­children on the radio and wondered about the faceless Galip Kurdi, the other brother.

In 1993, he had used a bulldozer to construct a geoglyph in the sands of the Atacama desert. It was a phrase that read “ni pena ni miedo”, or “neither shame nor fear”.

That would have made a great cover for a news magazine. In abstraction, there is a message. Everything affects everyone. Mediums are different. Expressions are varied. Combined, they have a lot of power. Together, they can make a lot of thought possible. What we need is reflection. Design is not an excuse to underplay the stories. On the contrary, they add something more. 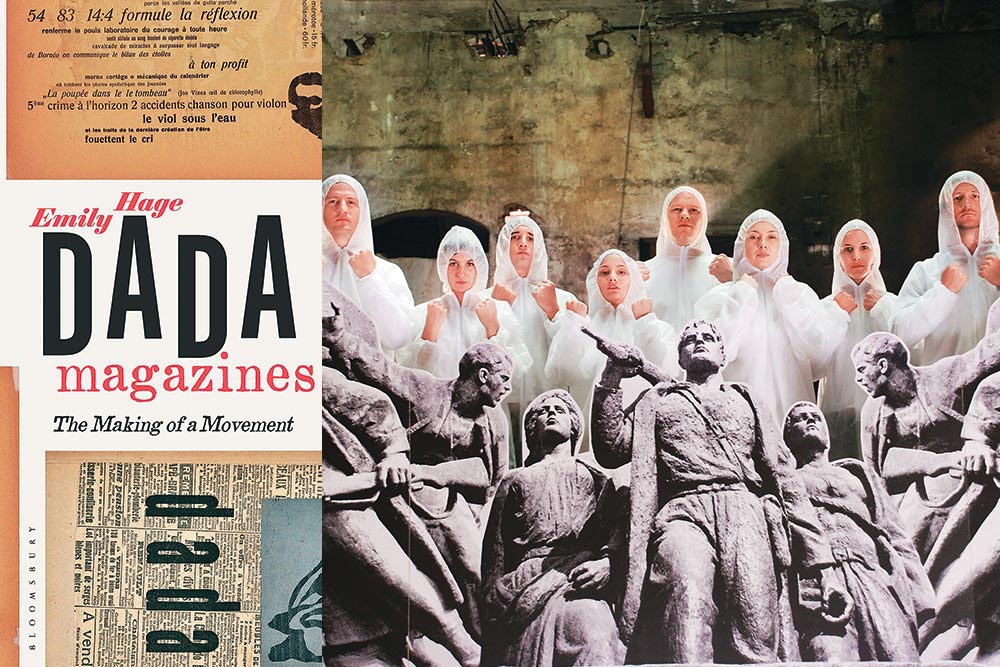 Poets, artists and journalists are storytellers. A convergence is the need of the hour. Magazines have used art on their covers or in the inside pages. The New Yorker covers are examples of this collaboration. An image can speak a thousand words. In times like these, images can say what we can’t. That idea compels us at Outlook to use works of artists in our stories and on the cover. To provoke, inspire and remind.

The cracked foot on the cover of Outlook’s October 4 issue (Caste Faultlines) was from an installation by Prabhakar Kamble, a Mumbai-based artist and curator associated with the Secular Art Movement. The idea was to look at divisions in society on the basis of caste. When Outlook approached him for a collaboration, he said art is not less than journalism.

“There should be frequent collaborations bet­ween them. When I saw ‘Broken Foot’ on the cover, I was impressed by the media’s power by getting an overwhelming response internationally. An image/artwork can convey thousands of words and a work like ‘Broken Foot’, which speaks about social imbalance, must be seen and discussed by more people,” Kamble says.

In my experience of reporting on art, mainstream art galleries don’t promote or appreciate works dealing with caste politics. We still live in a fractured society, a fractured time.

“We must have more modes to make it more acc­essible towards what cause it has been created and media is an important aspect to represent such thoughts. There are many artists working on such issues who need to get a good platform as representation. I am sure there will be more collaborations by Outlook in future,” says Kamble.

The cover of our last issue (November 1) ­featured Lahore-based artist Rashid Rana’s ‘Ommatidia III’ (2004), a portrait of Shah Rukh Khan made of thousands of candid photos of men in Lahore. The issue looked at Shah Rukh, whose son Aryan Khan is in jail on drug charges. The endless trolling of the actor, also for being a Muslim, is what made us do this cover as an intervention, a pause, a reminder to people of a time when actors weren’t cast in religion-coded avatars. When Outlook approached the artist and Chemould Prescott Road gallery in Mumbai with the proposition of using the portrait, Rana said it would be interesting to see how an image of the Bollywood star he made using the compound eye analogy is rethought in the current context. His series explores notions of hero worship, identities and intersection of multiple gazes. 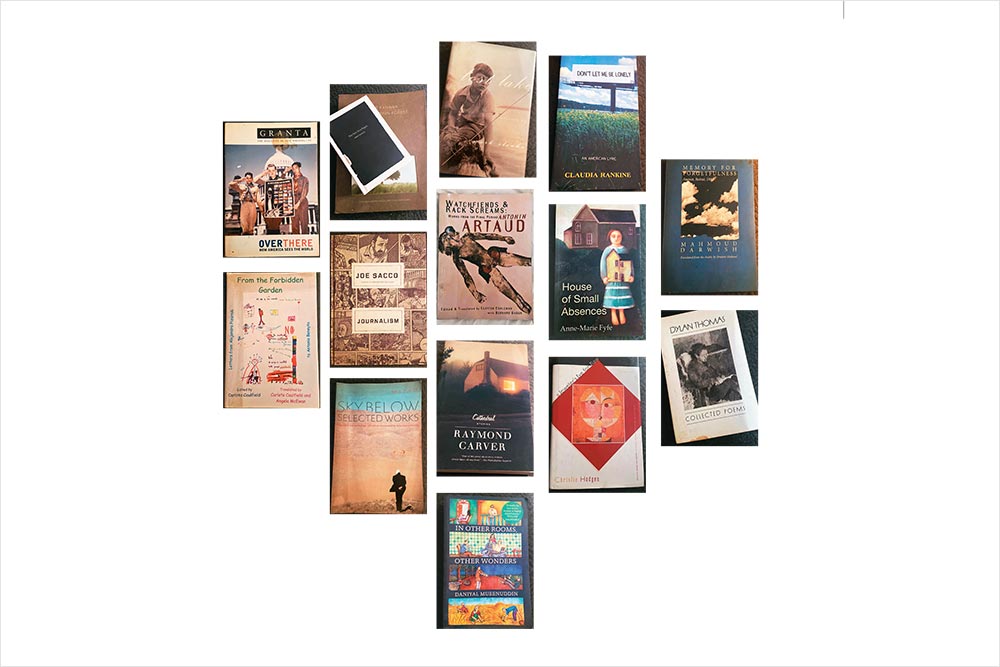 Books on the shelf that intrigue the writer with their covers, their words, their plots, their politics

An image has its own life, Rana says. This image is then an interventionist form. Images can be ret­hought. To me, SRK’s gaze, the illusionary whole, was the oppositional gaze, a defiant act. The term ‘oppositional gaze’ was developed in 1992 by feminist author Bell Hooks, who said power is in the looking. It refers to ‘looking’ as a defiant act. Here, we see the actor and a father and a Muslim and he sees us looking for his place in the ‘new India’.

Newsstands are the new art galleries. That’s how I conceptualise covers. I envision them in frames that hang on my walls. The cracked foot disturbed me. It made me remember the time when I saw the cracked feet of a manual scavenger in a village near Meerut. It made me think of the cracked earth. In our “island lives”, we need such reminders. Every cover is a reminder. The wall in my house I imagine as memory wall. Post-memory, post-human, post-empathy. All these terms that exist and don’t exist.

I am interested in the interrogation and interpretation parts. Readers and viewers are artists, curators, thinkers. Art is a form of thinking. Hanneke Grootenboer, author of The Pensive Image: Art as a Form of Thinking (2021), argues thinking is also a collective act. French philosopher Alain Badiou says on contemporary art that “it is better to do nothing than to contribute to the invention of formal ways of rendering visible that which Empire already recognises as existent”. 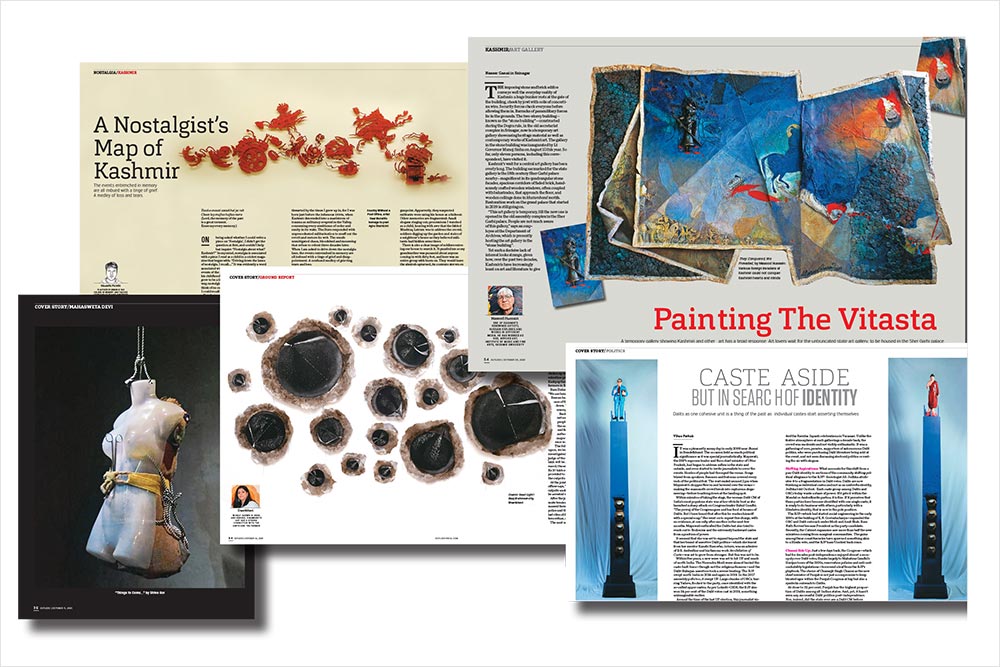 In Outlook, art is not confined just to the cover, but is also integral to the stories and columns inside, adding value to text

Art’s aesthetic potential is also at the core of pol­itical engagement. Jacques Rancière, ­another French philosopher, says aesthetic ­regime breaks the barriers and renders more ­engagement of art with politics, society and thought. Vibha Galhotra, a Delhi-based artist who works on climate change, environment and the Anthropocene, says she has always considered her work political. “I am surrounded by dying rivers and industrial waste. My work is informed with my reality. It is political,” she says. Contemporary art can be a counter-power.

Tristan Tzara, poet and founder of the Dada movement that began in Zürich during World War I, was driven by his contempt for bourgeois values and traditional attitudes towards art. The Dadaists were irreverent. That’s a good thing to be. The rejection of art as a commodity can be traced back to the Dadaists.

Now, the echoes of Dadaism are everywhere. “Art could be an ephemeral performance, a page in a magazine, an object found in the street. The strategies of Dadaism are now part of almost every artist’s vocabulary,” said Adrian Sudhalter, art historian and curator, in a 2016 piece in the Wall Street Journal.

Art and journalism began converging sometime around the French Revolution. That was when images that represented contemporary social conditions and politics began to appear in the work of artists like Francisco Goya.

“All art bears witness in some way to history or individual experience,” said Jennifer Liese, ­director of the writing centre at Rhode Island School of Design and editor of Social Medium: Artists Writing, 2000–2015. “Art does this ­explicitly and intentionally.”

While journalism in expected to take a more objective and dispassionate view, things are now churning and definitions are overlapping. Journalists and artists play very similar roles in society. In a post-truth world, we need such ­eng­agements. Facts are no longer enough. There has been a dismantling of facts, once held sacred in journalism, by fake news. And art is another way to uphold the storytelling that we hope can protect our institutions. As Shireen Gandhy, dir­ector of Chemould Prescott Road, says, we are storytellers. “All artists are political,” she says.

This wall in my house with artworks and ­manifestoes, the books on my shelves, ­magazine covers like one called “black on black” to mark the 9/11 twin tower tragedy in The New Yorker, the poems I have framed, the memory that is a lib­rary of images from everywhere, all give me hope that perhaps collaborations are the future of journalism. Just as we saw imperfect ­solidarities emerge in the last couple of years in movements like Shaheen Bagh and the farmers protest.

So, perhaps this is to be done now. A place for all as storytellers. Artists, poets, writers and journalists. As it should be.