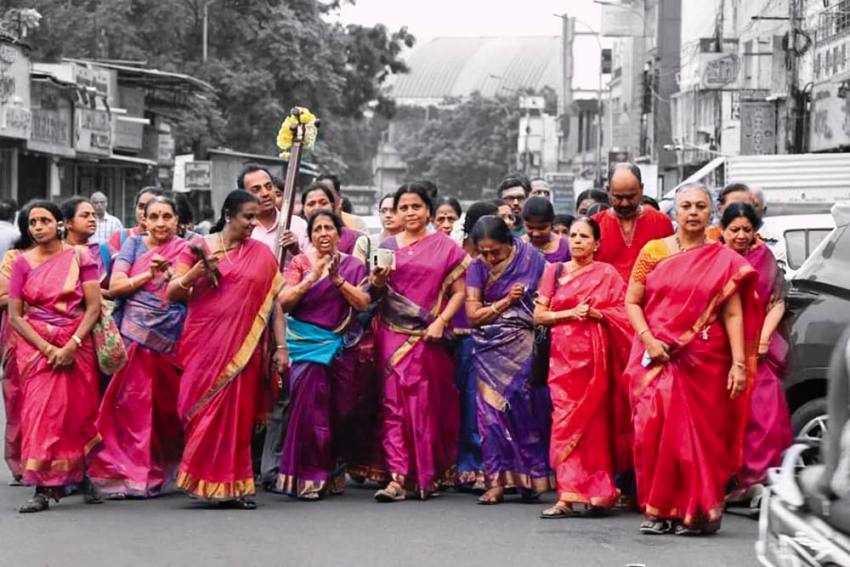 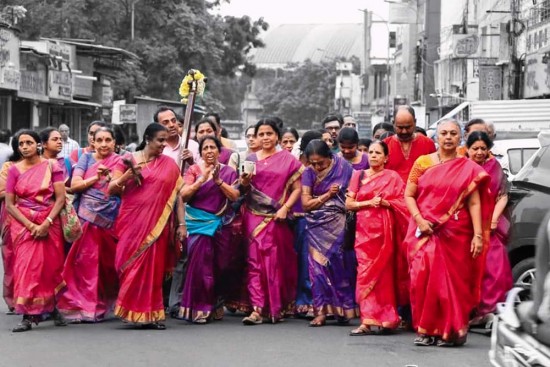 A thin, cold air wraps the ‘Mada’ streets of Mylapore—the four streets around the iconic Kapaleswarar Temple. The locality has bestirred itself by six in the morning, with a few shops and coffee stalls open for business. And then the tunes of a bhajan resonate from one of the streets.

The singers are a group of thirty men, women and children, marching slowly, their chorus hanging in the air, as they halt at intersections to register their pre­sence. After an hour of ambulat­ory singing, the group returns to its starting point—the eastern tower of the temple. After a short crescendo, the bhajan ends.

“We will be back tomorrow around the same time; this has been our daily ritual during Maargazhi (the Tamil month bet­ween mid-December and mid-January) for many years,” says K. Sant­osh, a finance manager in an MNC. He admits that not many are accomplished singers but are united by their love for music and devotion to Lord Krishna.

A similar interest in Tamil devotional hymns called Thevaram—in praise of Shiva—binds a smaller knot of devotees who assemble near the Gandhi statue on the temple’s south-eastern corner. “Today we are only six and a few more will join us. Our group has thinned down this year as many are out of town but whoever ­is in Chennai carries on this ann­ual out­­ing,” explains Arumugam, a retired banker.

Elsewhere around the four Mada streets, at least a dozen groups would similarly circumambulate the temple, suffusing the early hours in music for a month during Maargazhi. “Considered the most pleasant month climate wise, Maargazhi is dedica­ted to gods and prayers. Events like weddings are not held as the faithful are exp­­ected only to utter prayers and hymns...thus the tradition of bhajan singing in and around tem­­ples. This older practice evolved into musical concerts, thus spinning off Chennai’s own music season, which now extends from November to end Jan­u­ary,” points out veteran singer and composer Rukmini Ramani. 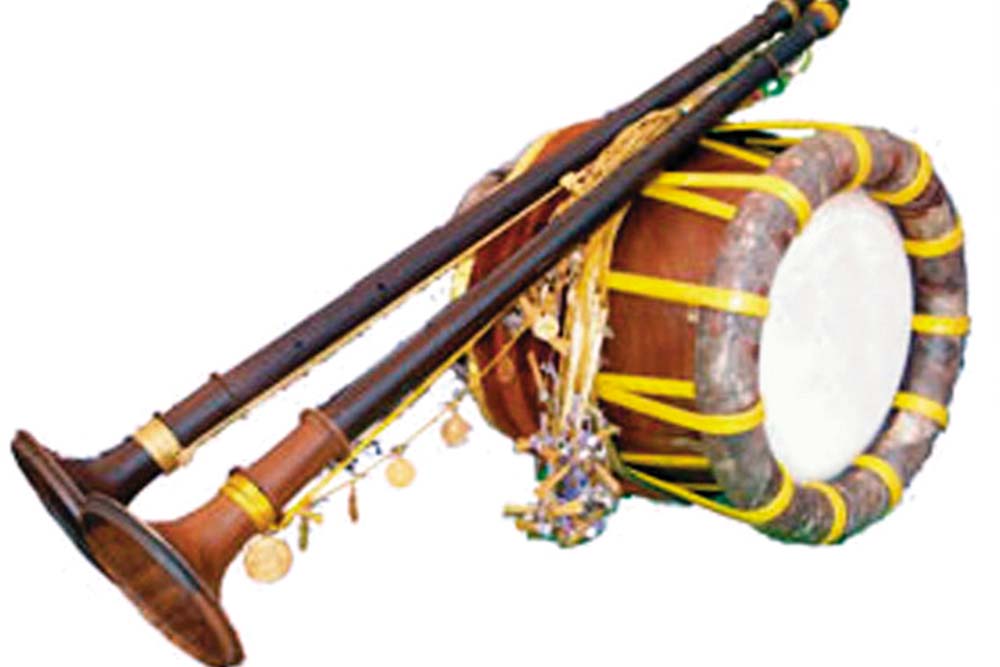 Bhajans sung on the streets was first adopted to take Carnatic music to people.

Till a year ago, this 80-year-old used to lead her own troupe of singers through Mylapore’s streets, continuing a tradit­ion of veedhi bhajanai (bhajans on the streets) that her late father Papanasam Sivan, a well-known composer, had started over 70 years ago. As a child, she used to accompany him during his “walk and sing” outings during Maargazhi. Her group, even in the absence of Rukmini ‘Amma’, goes about its routine, singing compositions of Sivan as well as some of Rukmini’s own.

“Sivan was the trail blazer of veedhi bhajanai and huge crowds waited on the Mada streets to listen to him. The way he connected ordinary people with divine music inspired others to form their own bhajani groups and take this format all over the state,” observes Premeela Gurumurthy, vice-chancellor of Tamil Nadu Music and Fine Arts University.

Senior carnatic vocalist Madurai G.S. Mani points out that bhajans sung on the streets was an unobtrusive instrument the elders had deployed to take Carnatic music to the people. He descr­ibes its effect: “Just imagine, women would have cleaned up their doorway and drawn kolams, the men would be neck deep in their morning papers and kids would be struggling to wake up. Then, suddenly, live music permeates the air. It charges the atmosphere.” Out of curiosity, child­ren would pop out on the streets; this reciprocity would inspire singers, he adds.

Just around the corner from East Mada Street, the thin voice of a singer cuts through the air from a small nondescript temple , as Santosh’s group winds up. The temple hall, shrouded in dawn’s sha­dowy darkness, is illumina­ted by about 30 oil lamps. Sitting in front of the sanctum of Raghavendra, the madhva saint, Delhi V. Muthukumar sings a composition of Swathi Thirunaal. It is a typical concert ensemble, with violin and mridangam, but with no amplification. The flickering light from the oil lamps dance to the slow, measured rhythm.

“We wanted to create a new but natural ambience—the simple setting of the temple and the musical connect between the performer and the divine,” explains V.V.S. Murari, who organises these early morning concerts. The early hour also means a small audience—less than ten people have gathered to listen to Muthu­kumar. But the cost accountant-tur­ned-music teacher does not mind. “Having been on many concert stages I find this experience refreshing. This is more of a communion with god than with the aud­i­ence,” he says after a 90-minute conc­ert, as the first rays of the sun filters thr­ough, gradually brightening the hall.

It is in such nooks and corners that Carnatic music gets rediscovered and rep­lenished, says Vincent D’Souza, editor of Mylapore Times, a neighbourhood weekly. “The rasikas and singers create alternate spaces where Carnatic music can be performed and heard. This way even unknown singers and budding talents find a stage to perform. When such events happen in other places, all loc­als need to do is to walk to the nearest temple or a bungalow to listen to a concert,” he points out. When a ‘difficult’ form as Carnatic music becomes accessible it finds new converts, reasons D’Souza.

Rasikas of Chennai are also organising concerts in small, intimate surroundings, converting heritage buildings, gardens, even large halls in their homes as the venue for a chamber ensemble, often without microphones. “The smaller aud­ience means greater involvement and at times more knowledgeable rasikas. The informal ambience also drives the artiste to strive for something different, try a more challenging raga,” suggests Thia­ga­rajan, who conducts a monthly concert at the ancestral home of his grandfather, Carnatic great Musiri Subramanian.

But the attraction of performing on a big stage before a large aud­ience con­­tinues to be a major incentive for Car­­natic hopefuls, more so for their parents. “The prospect of a youngster on stage, even amidst a group, with videos shot by parents and shared on soc­ial media, is a good way to hook young aspi­rants,” admits a sabha secretary.

Rukmini Ramani concurs, saying that it does, however, compel youth to keep at it. Indeed, in a large auditorium she was sandwiched by over 70 kids—all singing in unison Sri Ramacharithram, the story of Ram composed in 24 verses by Sivan, even as parents crowding the front rows jostled with mobile phones and selfie sti­cks. Pointing to the contrast with the pristine, early morning concerts, Guru­m­­urthy reasons: “A small stream or big river, ultimately Carnatic music wins.”