More from Thufail Pt
View All

Locked up in a Kerala village for nearly a month due to the pandemic, one morning I saw myself in the mirror and was shocked. Strands of my hair were all over the floor. I felt terrible. Imagine my surprise a few days later when I saw a work of art created from strands of the artist’s hair. I was at the ‘Lokame Tharavadu’ (World Is One Family) contemporary art exhibition in Alappuzha—my first outing after lockdown restrictions were relaxed. Who would have thought of one’s hair as material for  an artwork of such size and scale to depict despair and longings, if not due to the pandemic-induced loneliness?

The pandemic locked up human bodies across the world, but it also opened up their minds and ­emotions in many ways. The Bangalore-based Malayalee artist Indu Antony says the pandemic and the lockdown threw her into unchartered territories. The isolation was particularly heightened as she had been living alone. “The absence of touch was striking,” she says. Then she discovered her old ‘orma petti’ (memory box), which contained objects she had been collecting for years.

“I began stitching each of these objects with a single strand of my own hair because, for me, hair and the act of sewing is a metaphor for memory,” Indu says. Memory is an act of resistance against forgetfulness. Indu had felt a sense of resonance with abandoned photographs. She has been collecting images of women from various spaces—some found on the road and some from old shops. She used them on salt prints and stitched their edges with her hair. “Salt prints have an ephemeral quality to them. They fade, they disappear in front of your eyes—much like abandoned people. I wanted to hold on to their presence by stitching the edges of the photograph with my hair, which eventually will be the only part of this work that will remain, with the empty space to question this,” she says. 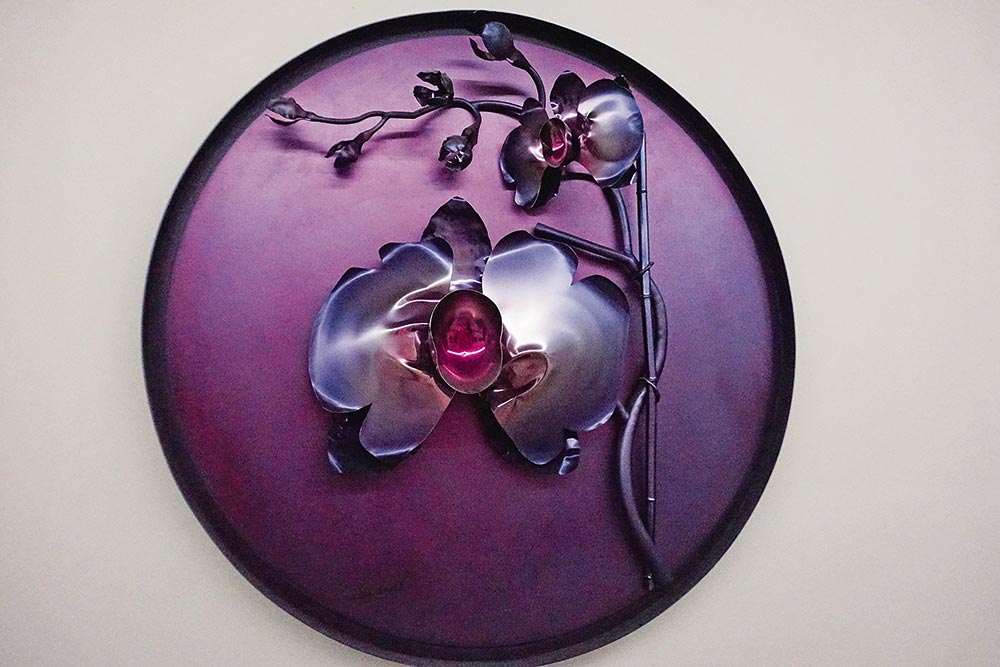 A work by Alex Devis.

Such photographs of women are now all over the walls of her home. “It’s like these women and I are in the house, like an extended family. By the end of the year or early next year, the image will completely disappear and only the hair around it will ­remain,” Indu says. She has also woven a poem using her hair. “Stitching gave me a kind of meditative feel,” she says.

‘Lokame Tharavadu’, perhaps the largest ever contemporary art exhibition in the country, has many such stories to tell. Indu’s memory box is only one among a large number of astonishing pieces of work on display. Over 270 artists, more than 50 of whom are women, are exhibiting their work—paintings, photographs, sculptures, installations, documentaries etc—in the 70-day show at six venues—five in Alappuzha and one in Ernakulam. “The exhibition is conducted in a space spread over 6 lakh sq ft. The wall space ­itself is 1.5 lakh sq ft,” says artist Bose Krishnamachari, founder member and president of Kochi Biennale Foundation. ‘Lokame Tharavadu’ is Bose’s brainchild.

How Bose brought such a large number of artists on a single platform is a story in itself. All the artists are Malayalees, but based in various cities and countries. Some are famous like Gigi Scaria, Parvathi Nair, Jalaja P.S. and Jitish Kallat, but several others are relatively unknown. According to Bose, restricting the selection of artists only to Malayalees hasn’t really restricted the scope of the exhibition. “It has rather opened up a new horizon,” he says. Bose travelled to the nooks and corners of the state to find the artists. Some of them didn’t even have a studio. He found one of them painting on her kitchen table and another keeping his artwork on his bed. But Bose gave them confidence. He set no bar—age, gender, ­successful or struggling—for selecting an artist. 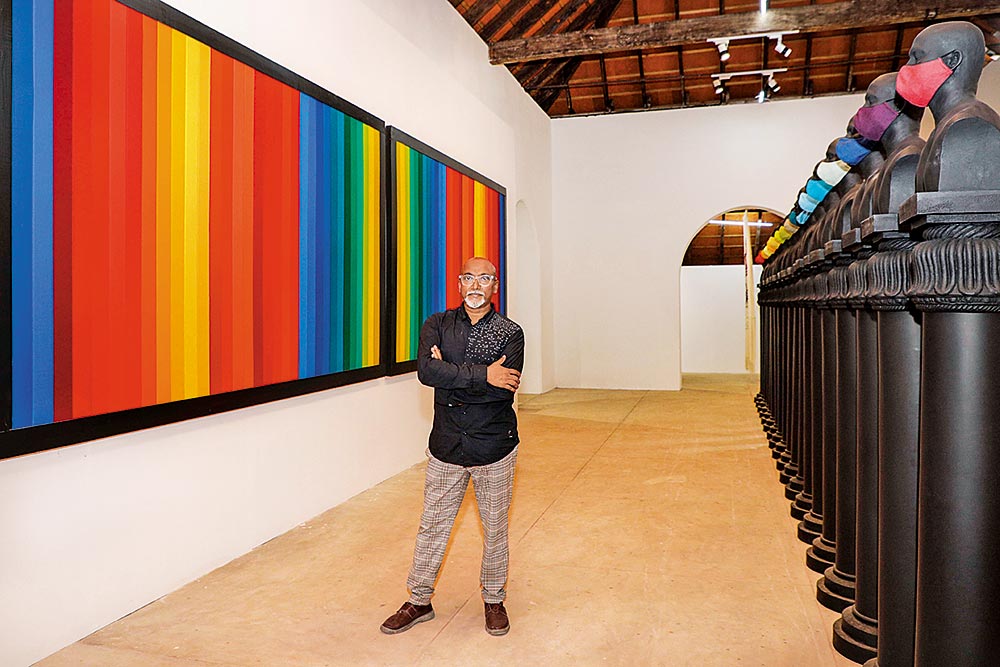 Bose Krishnamachari with a work by Blodsow V.S. in the background

“A true artist can be identified by his or her consistency and continued practice,” Bose says. The process helped him find talents with diversity in schools of practices and philosophies ranging from surrealism to abstract and conceptual art.

It all began when the Kochi Biennale couldn’t take off due to the Covid-19 pandemic in 2020. Bose then conceived the idea of ‘Lokame Tharavadu’. Kerala’s then finance minister Thomas Issac suggested Alappuzha as the venue. Bose also happened to meet the head architect of the Alappuzha heritage project, Benny Kuriakose, at the Thiruvananthapuram airport. It was then decided to convert the heritage properties in Alappuzha, which were in dilapidated condition, into temporary spaces for the art exhibition with the help of Bose’s designer and architect friends.

Bose invited his artists to see the venue even ­before the project kicked off. One of the artists participating in the exhibition, Blodsow V.S., showed us one such venue at the Coir Corporation building where coir and weaving machines were lying scattered all over. The organisers converted it into a beautiful space, though not climate-­controlled. “Finance was the biggest challenge. The government offered Rs 2 crore,” says Bose. So far at the show, the artists have sold their artwork for Rs 22,000 to Rs 28 lakh. 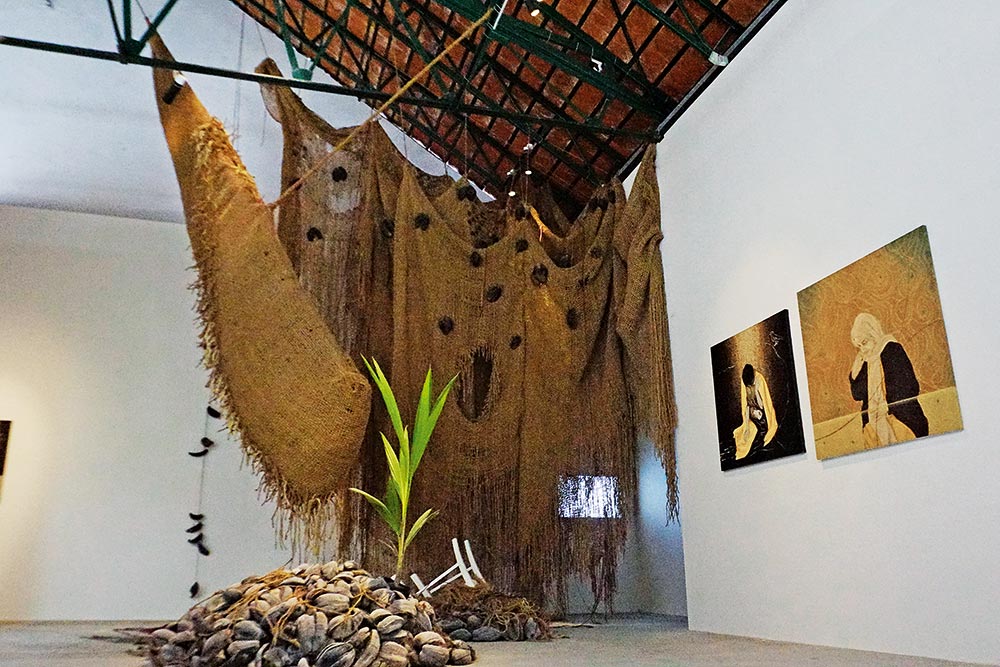 ‘Segregated-Discarded’, an installation by C.F. John

Self-reflection and rethinking during the pandemic have left a deep impact on most of the artwork here. All the themes—ranging from gender to caste, nature to disasters and so on—have a common element that lies somewhere between despair and hope, which resonates with emotions triggered by the pandemic.

Despair and hope loom large not just on the ­artwork at the show, but on the entire surroundings—in fact, on the lives of people. The show itself was affected by the pandemic as it had to be suspended only 12 days after it opened on April 18. It was resumed on August 21 after the state government relaxed lockdown restrictions.

Alappuzha, known as the Venice of East, is a tourism hub in Kerala. Tourism was hit hard everywhere due to the Covid-19 pandemic and Alappuzha is one of the worst hit as a large section of people here are directly dependent on tourism. On the way to the show, we could see a long line of houseboats waiting for tourists—with despair and hope. Outside the show’s venue, 52-year-old Kalpana Kumari, who runs a small shop, tells us she earned nothing during the first and second waves of the pandemic. Even now her sales are merely 20 per cent of what used to be in the pre-pandemic time. 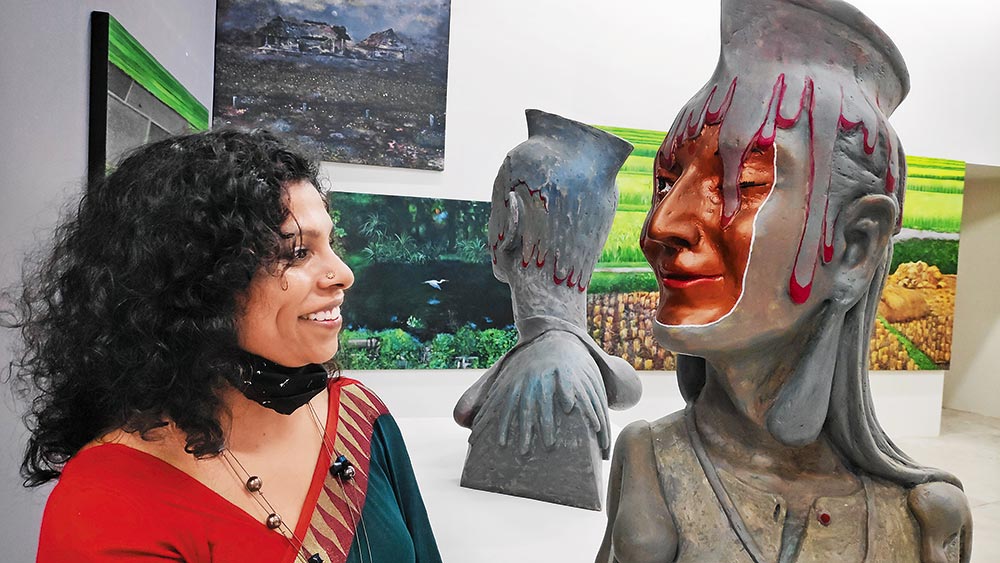 Artist Smita G.S. looks at a sculpture by K Raghunathan.

At the show, art becomes inseparable from the reality around. You can see artist Vipin Dhanurdharan’s installation of a railway track named ‘Rest In Peace,’ which is a sharp reminder of the death of 16 migrant workers who were run over by a train in Maharashtra’s Karmad while ­returning home during the first wave of Covid-19. Another artist has a fully naked portrait of himself that he painted during his quarantine period. Someone else depicts human faces on his utensils, again a quarantine experience.

There is also a deep sense of journey through history. A film about Mulakkaram (tax imposed by Kingdom of Travancore on underprivileged-caste women if they covered their breasts in public) runs in one of the many small theatres set up at the venue. Names of Unniyarcha, Thathrikkutti and other heroic women engraved on the surface of an artwork are hard to miss. 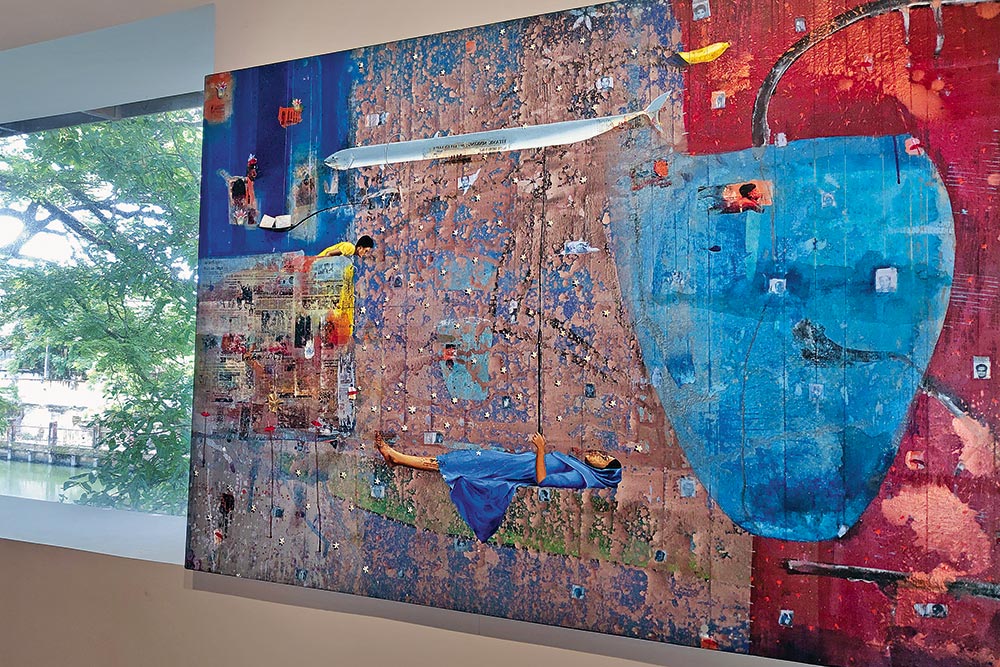 ‘Lokame Tharavadu’ is a line from a poem by the Malayalam poet Vallathol Narayana Menon. Tharavadu means ancestral home, which used to accommodate joint families. Among the exhibits is a photograph of one such tharavadu, slit down the middle by a concrete cutter after the division of property. A paradox, indeed. But the show off­ers nothing less than liberating our minds.

(This appeared in the print edition as "Unlocking the Memory Box")