A tribute to the inspiring artiste that was Lata Mangeshkar

To simply write that she bestrode playback singing in Indian cinema like a colossus would be an understatement. Lata Mangeshkar, it goes without saying, was obviously more than that. An unfathomable talent gifted with a divine voice that not only held millions of her fans but also generations of the greatest maestros from both the classical and popular music in absolute thrall over the decades, she was a veritable personification of melody in its pristine and unadulterated form. There was nobody quite like her, and there will not be anybody like her. Period.

“I have always been praying to God that, if possible, He should not give me a rebirth,” Lata Mangeshkar had once told an interviewer. But if she had to choose between moksha (salvation) and sangeet (music), she added, she would definitely choose music. That was the answer everyone expe­cted from her. Music was, after all, Lata Mang­eshkar’s God all through her life, though she herself was invariably called Goddess Saraswati by legions of filmmakers, composers and music lovers of all hues from across the globe.

From the late 1940s when India was savouring its dew-fresh Independence to the Tenties of the techno-millennials, Lata remained synonymous with Indian music like no other singer from Hindi cinema or even outside of it. Just remove her repertoire from the history of Hindi film music to realise how poorer it would turn out to be!

When ‘Mallika-e-Tarannum’ Noor Jahan left for Pakistan after 1947, there seemed to be a vacuum in Hindi cinema that nobody thought would be filled so easily in the near future. But a young and shy Lata arrived quietly, and India soon had its own nightingale whose Hawa mein udta jaaye in Barsaat and Aayega aanewala in Mahal, both rele­ased in 1949, left the entire nation under the spell of her incredibly mellifluous voice. In retrospect, to even think that her voice was initially dismissed to be ‘too thin’ by some movie moguls and composers in her early days sounds nothing short of a sacrilege now. 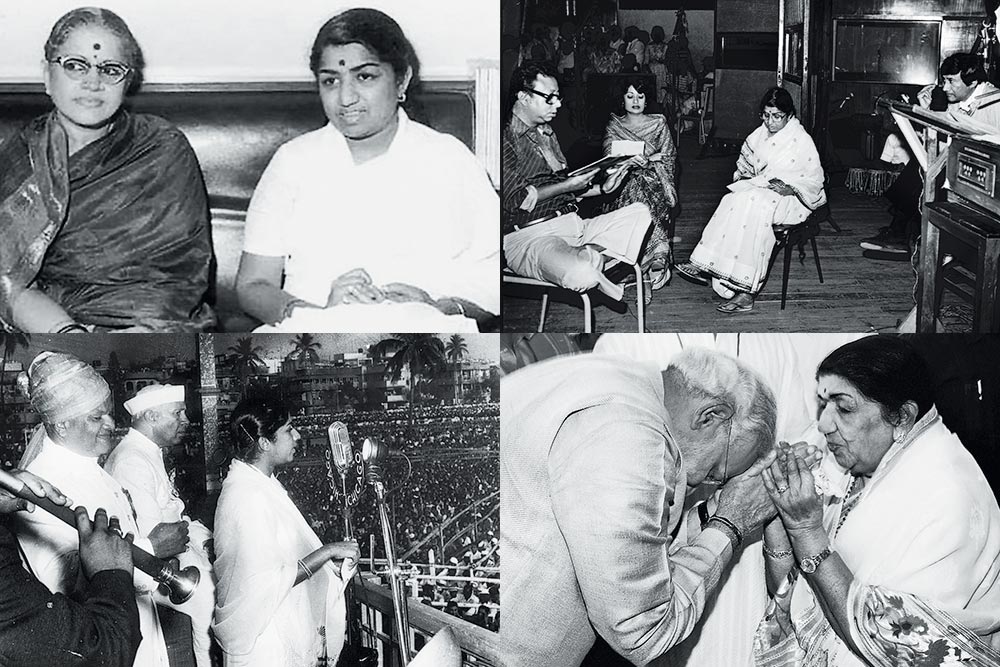 Whether it was the era of rusty 78 RPM discs or the trendy vinyls of the digital times, she collaborated with the best of composers, from Khemchand Prakash to Nikhil Kamat, and also the greatest of wordsmiths and singers, churning out thousands of timeless melodies. By the time she moved the entire country, not merely the then Jawaharlal Nehru, to tears with her Ae mere watan ke logon tribute to fallen soldiers after the Chinese aggression, she had well and truly emerged as the voice of the nation. A voice all of India loved to lip-sync, both in times of joy and sorrow, separation and reunion, or love and heartbreak!

Lata was in a league of her own in a field otherwise dominated by men. It was not as though Hindi cinema had any dearth of extr­aordinary singing talents. From K.L. Saigal, Mukesh, Mohd Rafi, Talat Mahmood and Kishore Kumar to Suraiya, Shamshad Begum, Gita Roy Dutt, Asha Bhosle, et al, the list of the songsters extraordinaire was too long, but there was only one Lata Mangeshkar.

In the mid-1970s, composer R.D. Burman wanted Kishore Kumar to sing the classic Mere naina sawan bhadon from Mehbooba (1976), which was to be recorded later in Lata Mangeshkar’s voice as well. But Kishore asked Pancham to record the Lata version first and hand its audio over to him. Once it was done, he listened to Lata’s version repeatedly and rehearsed for about a week apparently to get the right notes and nuances. Kishore, her contemporary, was no pushover. He was a supremely gifted singer in his own right, who was at the peak of his singing car­eer at that time. But he also knew that Lata (a trained classical singer unlike him)  would be simply infallible while rendering such a difficult raga-based number.

There are numerous examples like that. Lata sang thousands of classics in her illustrious career, which have stood the test of time. Her Lag jaa gale from Woh Kaun Thi? (1964), for one, remains a perennial favourite of young millennials to this day. There are several other numbers like it from her astounding oeuvre, which will continue to enthral music lovers for all times to come. 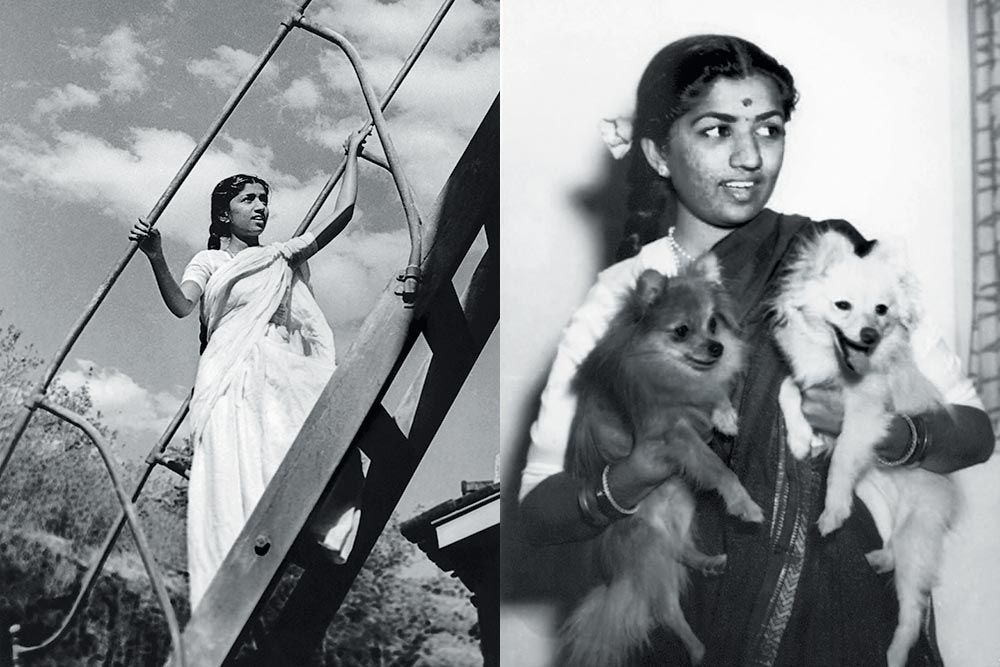 For decades, such was Lata’s dominance in the music industry that a few detractors at times accused her of having perpetuated the so-called “Mangeshkar monopoly” in Hindi cinema, implying that she did not allow new talents from outside her family to flourish. They cited the example of Gita Roy Dutt, Jagjit Kaur, Suman Kalyanpur, Sharda, Vani Jairam, Sulakshana Pandit, Hemlata and many others to insinuate that their career did not last long because of her so-called hegemony.

They also alleged that even her younger sister Asha Bhosle had to struggle hard to come out of the shadow of her Didi. O. P. Nayyar—incidentally, a rare composer who did not consider Lata a ‘goddess’ and promoted Asha instead to the hilt—had once famously said that R.D. Burman had always given his best of tunes to Lata. If at all it had happened, it was not without a reason. It should not be seen as a reflection on the talent of any other singer (including Asha’s).

In fact, most filmmakers and composers did not want any other singer to step into Lata’s shoes when they thought nobody else would do justice to it. Raj Kapoor, for example, refused to rope in any other songstress and waited for her for months until she agreed to render the title song of Satyam Shivam Sundaram. She had fallen out with Raj Kapoor for a brief while and it took the greatest showman of the film industry to seek the help of the songwriter Pandit Narendra Sharma to persuade her. Raj Kapoor, like many other bigwigs such as Yash Chopra, could not visualise his films without Lata’s voice until his swan song, Ram Teri Ganga Maili (1985) as the director.

It is, therefore, unfair to say that she monopolised the film music industry in her heyday. As a matter of fact, she often fought for the rights of fellow singers. Way back in the early 1960s, she took up the cudgels on their behalf to ensure a slice of the royalty for them that the music companies were paying to the producers. Much to her chagrin, when Mohd Rafi did not back her demand, saying singers had no right to seek royalty once they had received their remuneration, she stopped singing with him for several years in the 1960s, though Rafi was the numero uno male singer at the time. After 1969, she also decided not to accept Filmfare awards as a playback singer in a bid to promote new singers. She was, doubtless, a nonpareil singer and anybody else, howsoever talented, was no patch on her.

If there was something called the Mangeshkar monopoly ever in playback singing, Hindi cinema was only too blessed to have it. In her passing, India has lost its most beautiful voice.

(This appeared in the print edition as "Sayonara")

(The writer is a national award winning film critic)