The Pugree or the turban is a gift of the Sikh gurus. Fashion designers are having a ball playing around with colour, textures and styles 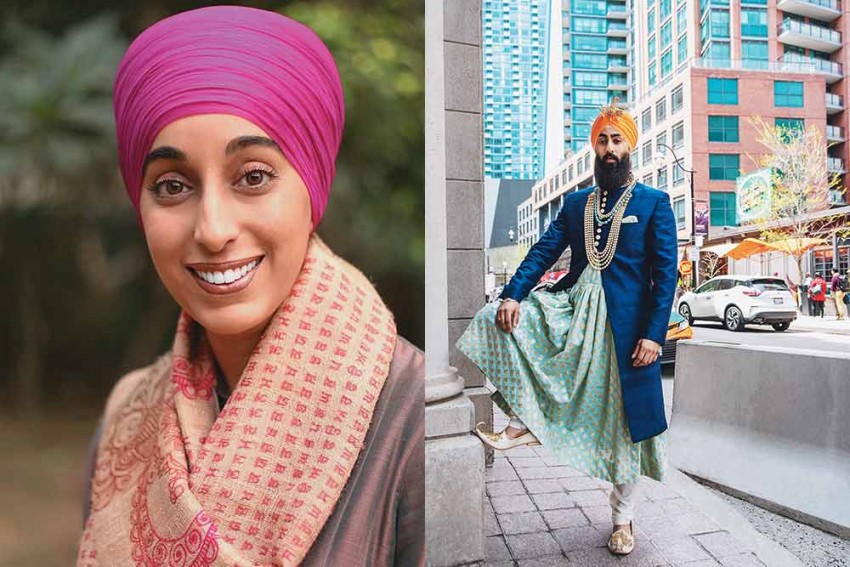 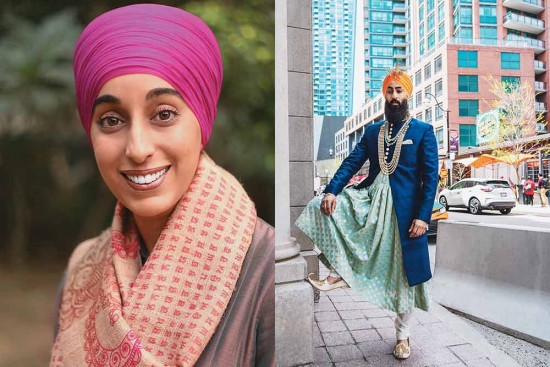 Striped turbans pinned  with feathers and brooches, lavishly embroidered sherwanis and gloved hands commanding majestic swords—the portraits of the modish rulers of Kapurthala are invariably a sartorial treat. Before Independence, the royal families of Patiala and Kapurthala were forerunners in fashion and luxury, and among the early patrons of labels like Louis Vuitton and Cartier. Maharaja Jagatjit Singh of Kapurthala, an avid traveller and Francophile, sported Louis XV-style wigs, dazzled in Cartier jewellery and travelled with over 60 Louis Vuitton trunks. Cartier designed the legendary Patiala necklace in 1928, especially for Bhupinder Singh of Patiala state. It had 2,930 diamonds and Burmese rubies, including the world’s seventh-largest diamond at the time, De Beers, as its centrepiece. 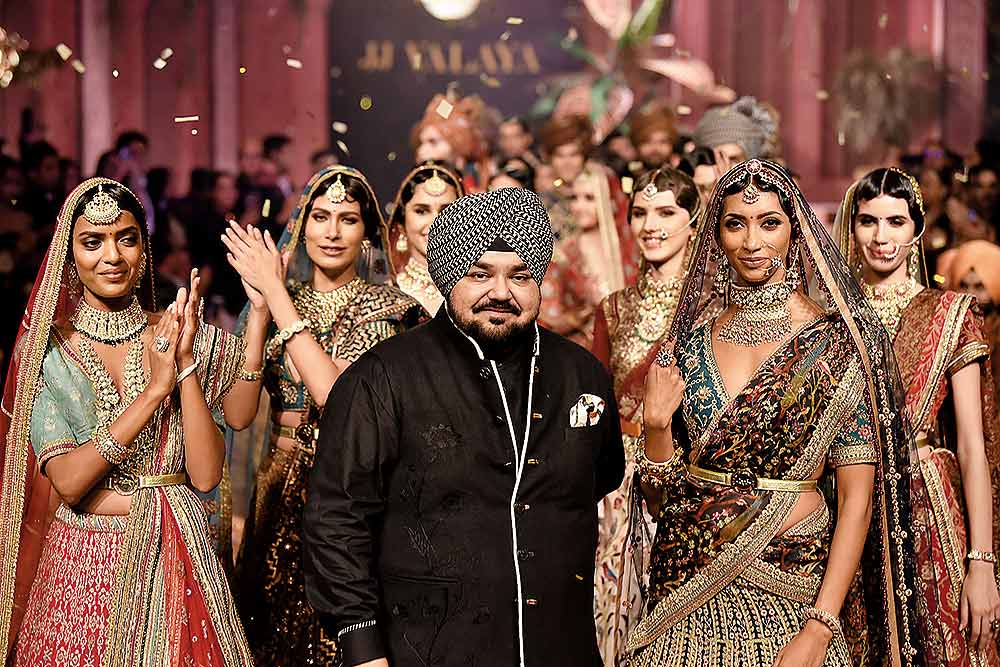 A century later, chic Sikhs are ­upholding their traditions of sartorial excellence while incorporating the latest trends. And at its crown lies the turban—the pugree—one of the ‘five Ks’, the religious symbols ­enjoined by Guru Gobind Singh in 1699. “The sense of regality and splendour notwithstanding, ­a ­pugree offers a fantastic opportunity to make a statement through its varied textures, colours and styles,” says Sikh fashion ­designer J.J. Valaya. “We are developing some beautiful prints for our collection of turbans and are keenly looking forward to their introduction.”

“The turban is a gift of our gurus. It inculcates a sense of pride and strength, and also endows a ­responsibility to care for and share with others. Even now, people feel safe in the presence of a turbaned Sikh” says Harinder Singh, founder of 1469, a 15-year-old conceptual brand that celebrates Punjab, its culture, language and heritage. The name derives from the birth year of Sikhism’s founder, Guru Nanak, and takes inspiration from the concept of oneness he propounded. The brand retails T-shirts, the traditional phulkari ­embroidered garments of Punjab, and Gurmukhi calligraphy on stone, fabric and paper. 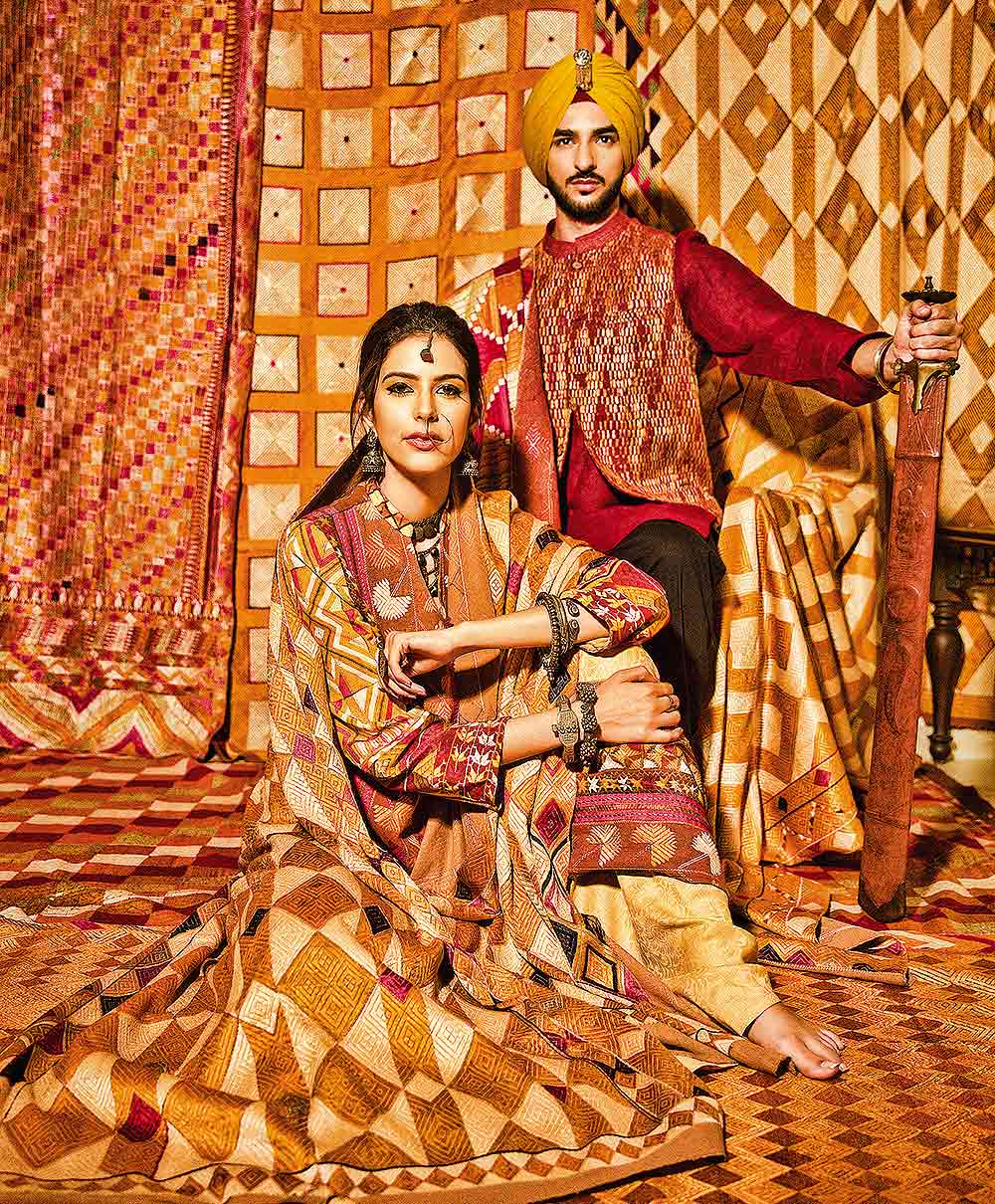 Wedding attire designed by Harinder Singh and Kirandeep Kaur of 1469

“One should choose the length and width of the turban on the basis of one’s height and face type. You can opt for either solid colours or patterned fabric. While many like to emulate the pugree style of their relative or a famous personality, the latest craze is vintage phulkari patterns digitally printed on voile,” adds Harinder.

But how does he like to wear his turban? “My  ­pugree makes my personality. I like to play with the colours of nature in my turban wardrobe—of the 146 I own, more than 30 are shades of green. Phulkari print pugrees make me feel special,” he replies. “Under the turban, Sikhs wear a small band. I experiment with colour combinations of my pugree and the band underneath, which is visible as a small triangular patch on the forehead.” 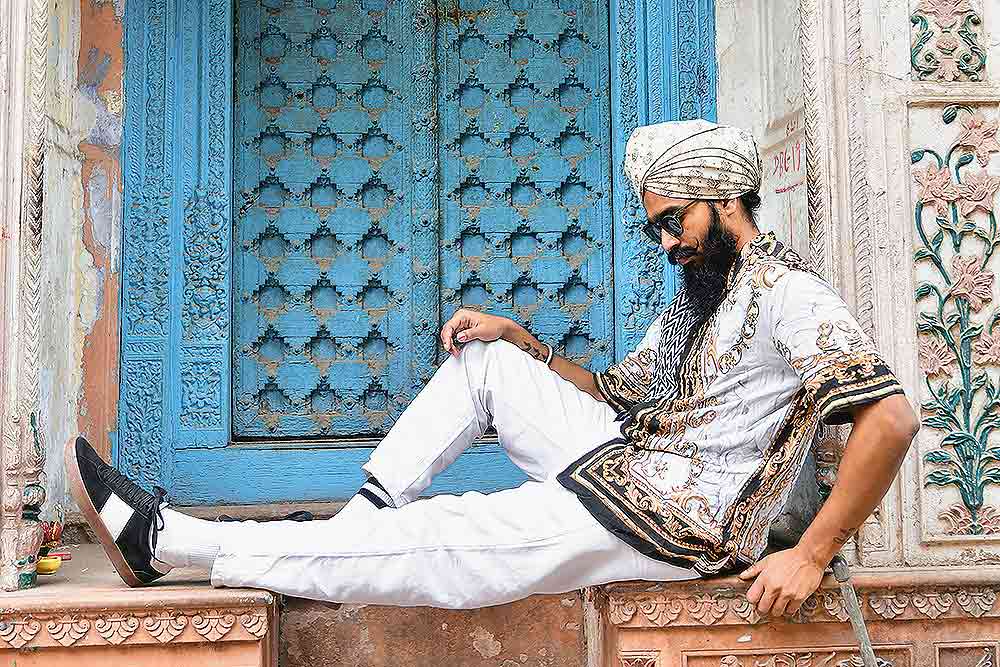 Harjas Singh, a model and stylist, says, “I put a lot of effort into accessorising and incorporating turbans into all my outfits. The turban is my identity and allows me to stand out in a crowd.” He feels the turban is not only a ­religious injunction, but also a conversation starter. “It’s an opportunity to educate and spread awareness about a religion that is often misunderstood,” he explains.

For travel photographer Param­veer Singh, turbans have been a constant companion on his journeys. “I wear the brightest hues when I travel. People come up and ask if they can get clicked with me. It is a great ice-breaker when you are in a foreign country.” He dons his ­pugrees in the Patiala Shahi style for a clean, professional look, though he also likes the wattan wali style, which is more crumpled. 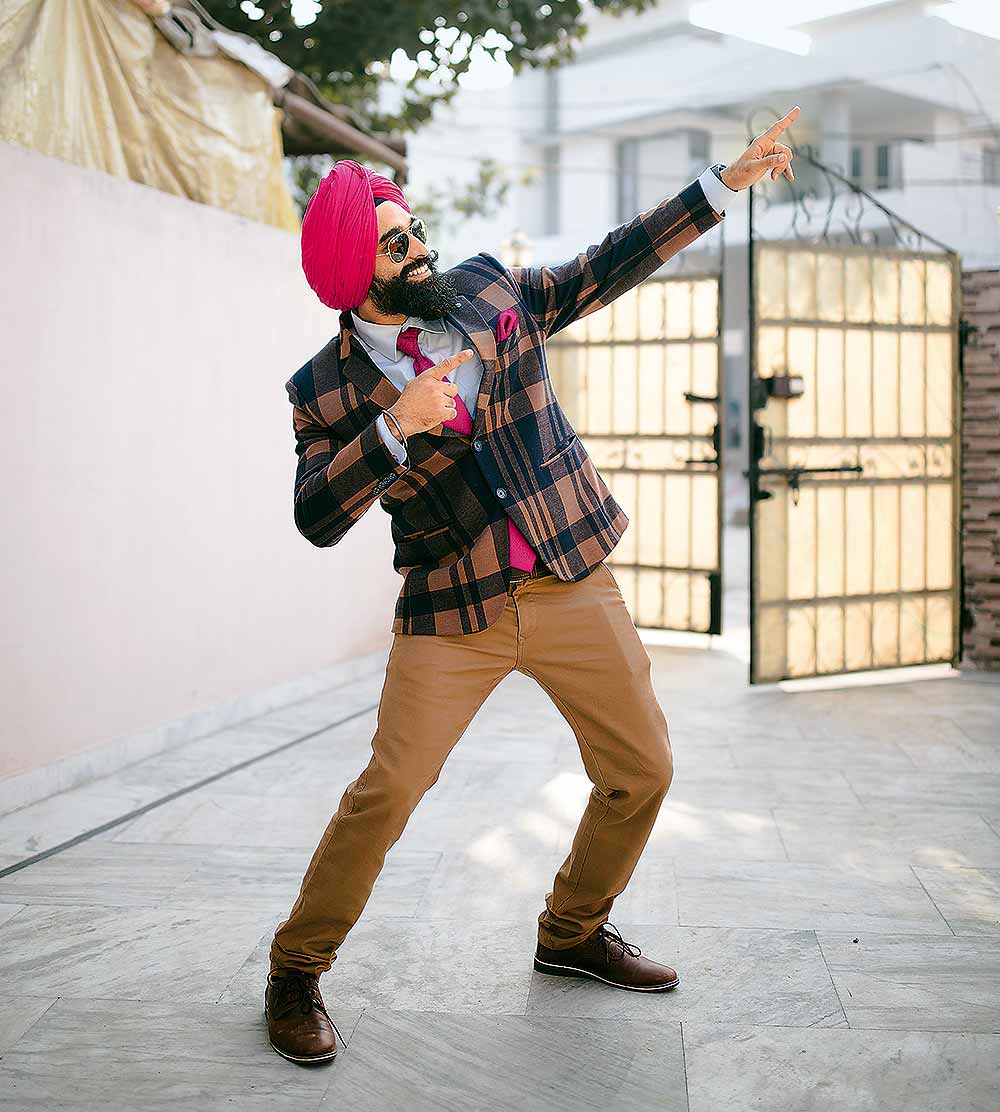 There are four main kinds of Sikh turbans—patka, dhamala, pagri and keski. Kids usually wear patka, a one-metre-long cloth that ties the hair in a bun on top. Nihang warriors sport the dhamala, a double-length turban of more than 10 metre that is well-rounded and eschews sharp points. Keskis are smaller turbans.

Regarding the different styles of pugrees, designer, photographer and model Maninder Singh elaborates, “Sikhs wear diverse kinds of turbans and within each, there’s a lot of differentiation based on personal preferences. The dimension and type of fabric also matter when tying a particular ­pugree. Although I can tie eight kinds, gol dastaar and UK style are my favourites.” 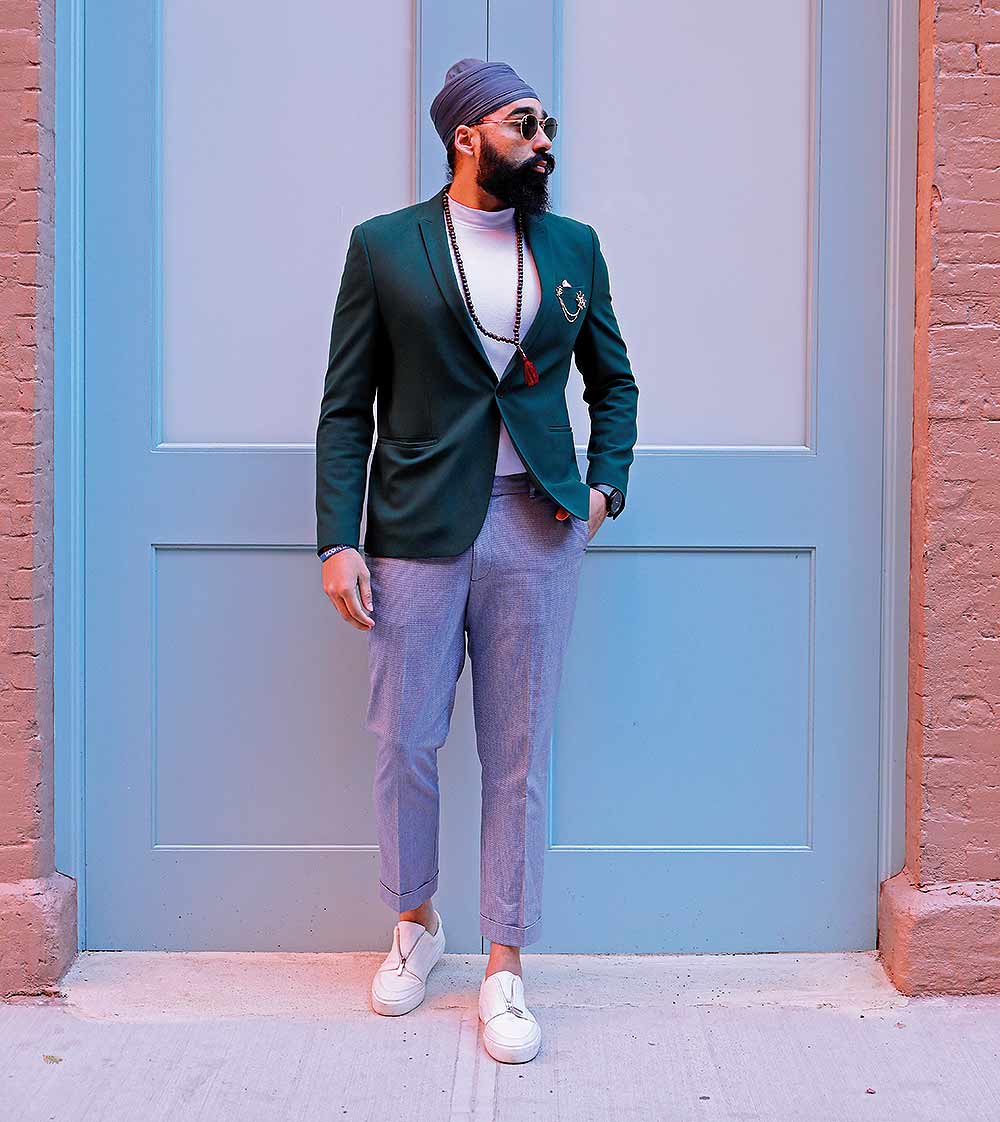 But it’s not only Sikh men—women also sport the religious headgear. Indian-American Sikh filmmaker Harpreet Kaur says, “Everyone is donning the turban, from models in Gap ads and Nikhil & Shantanu’s collection to ­actors in Hollywood and Bollywood. For me,the turban is a source of courage and confidence, and a constant reminder of our great history.” Singer Harshdeep Kaur considers the turban an integral part of her identity and always wears it during performances.

For Sikh women, however, style doesn’t end at the turban. Sonia Khurana, a Delhi-based designer, ­explains that elaborate Patiala salwars and phulkari dupattas  are the hallmarks of fashion. “Short-fitted kurtis with pleated P­atiala salwar and flowing phulkari dupatta is a signature style. Among youngsters, Sikh fashion is more a ­fusion of traditional fabrics with a contemporary look. A Patiala salwar, for instance, can be clubbed with a peplum top. Phulkari dupattas are teamed with a lehenga choli.” 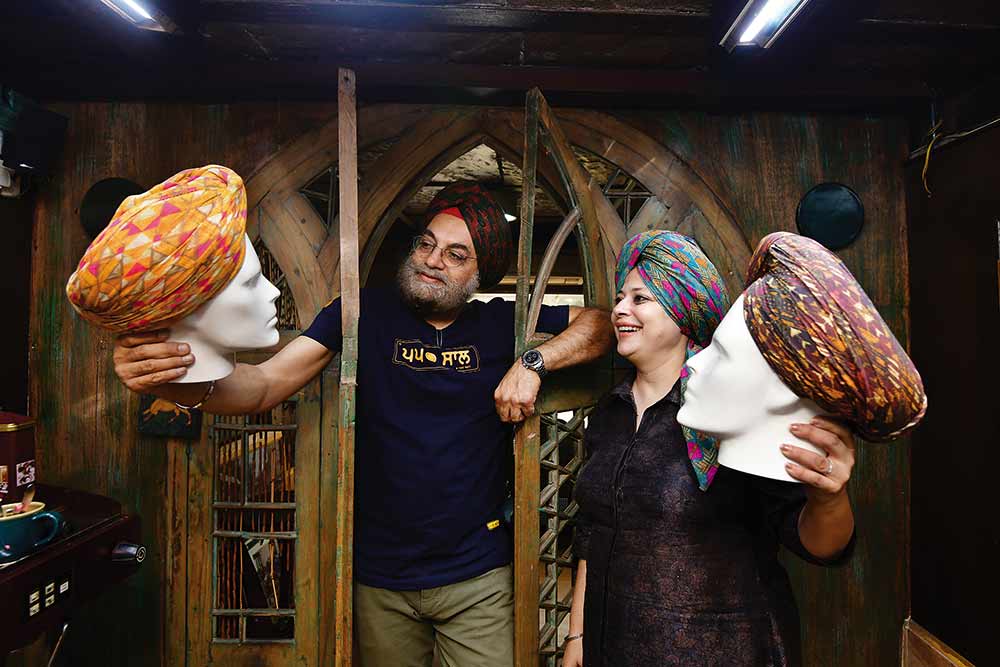 The Patiala suit, consisting of a salwar and kurti, has its fans in the film industry too. “I love Patialas for their comfort and style,” says actor Rakul Preet Singh. My aunt used to live in Patiala and for ­weddings, I used to get a Patiala suit stitched in Patiala.  I feel that a well-fitted Patiala suit is the sexiest outfit for a woman.”

Another enthusiast of the Patiala suit is Divya Dutta. “I am not a Sikh, but I know the traditions well,” the actor says. “I love their rich culture, dance forms and elaborate costumes. Sardars, with their sharp features, look like maharajas. Both Sikh men and women are remarkably good looking.”

Is Women's Test Cricket ICC's Unwanted Baby? Why This Indifference