Couples and wedding photographers dive deep into the pursuit of atrangi­—soar high in the air, or go boudoir topless... 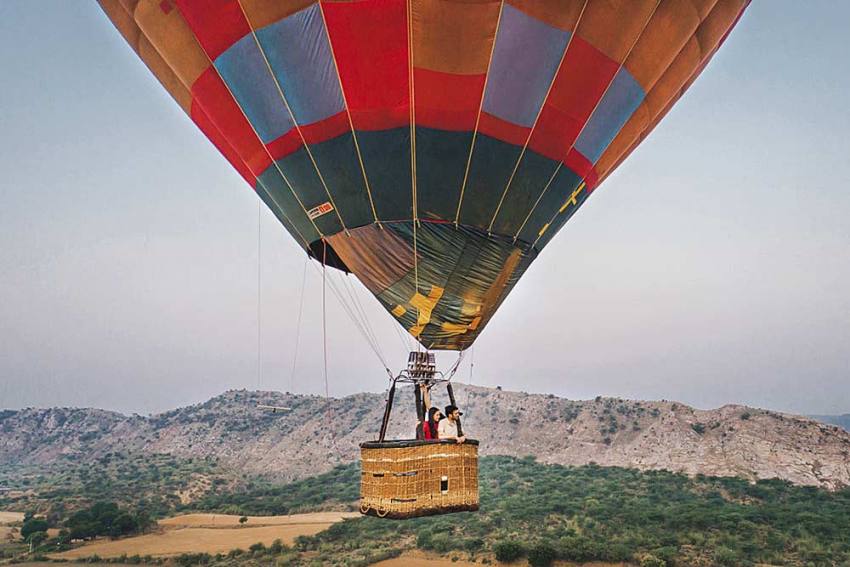 Shooting in the gondola of a hot air balloon
Photography by Darshan Sethi
Salik Ahmad December 12, 2019 00:00 IST Before We Do, Smile Please 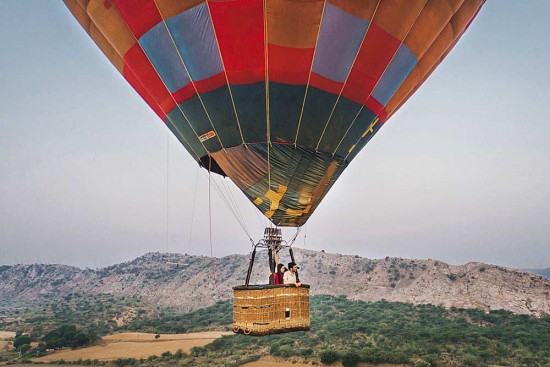 Winter is here, which means the wedding season is on. There’s pressure to host the “perfect day”, make it memorable—something that will leap out of family albums, earn nth number of upvotes on Instagram and Facebook, or simply sit silently in the hard disc for the brides and grooms to go to when they want to press the refresh button. That’s not the only “memory” saved for posterity. For those getting married, the shooting begins months preceding D-Day. Pre-nup shots, a Western fad, are now an intrinsic part of big fat (even small and lean) Indian weddings. Couples contract professionals—the retinue includes photographers, make-up artists, managers—and travel to exotic locales in India (Kasauli, Manali, Ooty, Goa et al) and abroad to get the best shots possible. But all these have become quite blasé. Couples want their photos to be atrangi and would pay or do anything for what they consider picture-perfect. Anything to lollop towards uniqueness. What about striking a pose in the gondola of a hot air balloon? Like the way Vidya Balan and Farhan Akhtar promoted their Shaadi Ke Side Effects in 2014. Or, go commando in a done-up room for the latest in pre- or post-wedding photography: boudoir. Risque? People are willing to take risks—in the air, underwater, hanging by a rope from a cliff face, posing on airport runways, or on a sultry couch.

Ashutosh Tyagi, 29, explains why people are pushing the limits. “We wanted to do something atrangi (unusual). Plus, my wife’s brother got his photos shot in Ladakh. There was pressure from her to make ours better,” says the software engineer in Gurgaon, who got married last December. He and his bride went to Goa, but the pictures were boring. A month after the wedding, they hired ano­ther photographer and headed to Kasol in Himachal Pradesh. What the palm-fronded beaches couldn’t, perhaps the outdoorsy, wooded hill town might, they thought. Shooting for two days in sub-zero temperatures and “so long as the light allowed”, the couple—in insufficient clothes for the weather—walked on snow to reach ‘locations’. “I had a blazer, but Charu was in a sari...torture for her,” says Tyagi. The rum wasn’t of much help.

For one drone shot, the couple posed on a log bridge across a stream of bone-chilling water. “But every risk we took, every penny we paid for the shoot, was worth it,” Tyagi says. “The moment I put up those images on Facebook and Instagram, the comments rained. ‘Is Yash Raj Films casting you guys in their next movie?’ one of my friends wrote.” The framed photographs in their home reflect their satisfation. “When you have photos, you can soak in that moment so many times later,” he reasons.

This pursuit of atrangi might look biz­a­rre to people. Suvarna, 31, and Abhimanyu Bansal, 32, got a pre-wedding shoot done underwater. “I had seen a wedding happen under water on Discovery channel. With all the rituals involved in a Hindu wedding, mine wasn’t possible underwater. So I went for the next best thing,” says Suparna, who married in April 2016. The perfect shot was achieved in the fiftieth take. 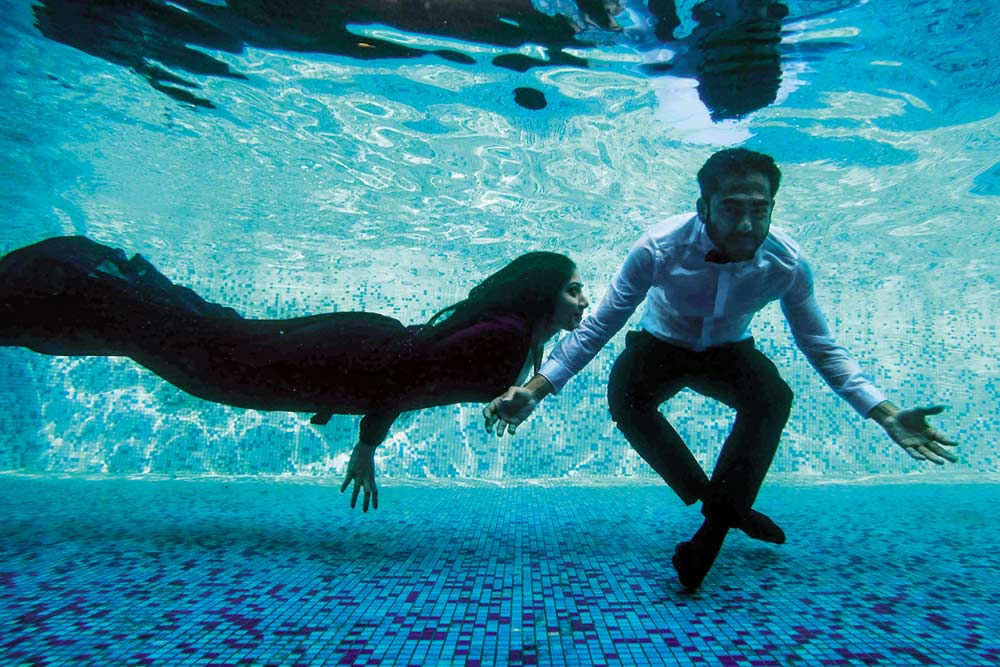 Wedding shoots cross paths with boudoir photography, a recent genre in India. The photography that goes under this rubric is, in its tone and tenor, celebratory of women’s bodies. “I often shoot brides-to-be. We book a plush room in a hotel and the women are mostly clad in lingerie, sometimes topless. They get sensuous images clicked and use them to surprise their partner,” says Priyanka Sachar, who moved from wedding to boudoir a few years ago. Some couples like to get clicked in bed, in intimate poses. Such requests come from both married as well as just-to-be-m­arried couples, Sachar says.

The big players charge as much as Rs 5 lakh for a day’s shoot.

Delhi-based wedding photographer Ashish Pareek has seen the photography landscape change over the decade. What used to be a minuscule portion of the wedding budget goes up to as much as 30 per cent of the total expenses. The rates vary from Rs 10,000 to Rs 1.5 lakh a day. The big players charge as much as Rs 5 lakh for a day’s shoot. People book heritage properties, or charter planes—at roughly Rs 3 lakh an hour—for mid-flight shoots. The total bill for such flights of fancy: between Rs 10 lakh and Rs 25 lakh. Dhanish Abrol, a professional commercial pilot, says he has flown pre-wedding photo ensembles eight times in as many years. People even take photographers with them on their honeymoons.

What feeds this frenzy? Pareek says people are mad about photos. Photographers are treated with deference—booked before venues are decided, and their opinion on décor, theme and lights often weighs above that of the over-enthusiastic mother/mother-in-law-to-be. The seriousness is often refl­ected in the subtleties. Like a bride who wanted a couple portrait set against a starry night. And since she was from a conservative family, she had to sneak out of home a few times during the shoot, photographer Bhuvan Gaur says. 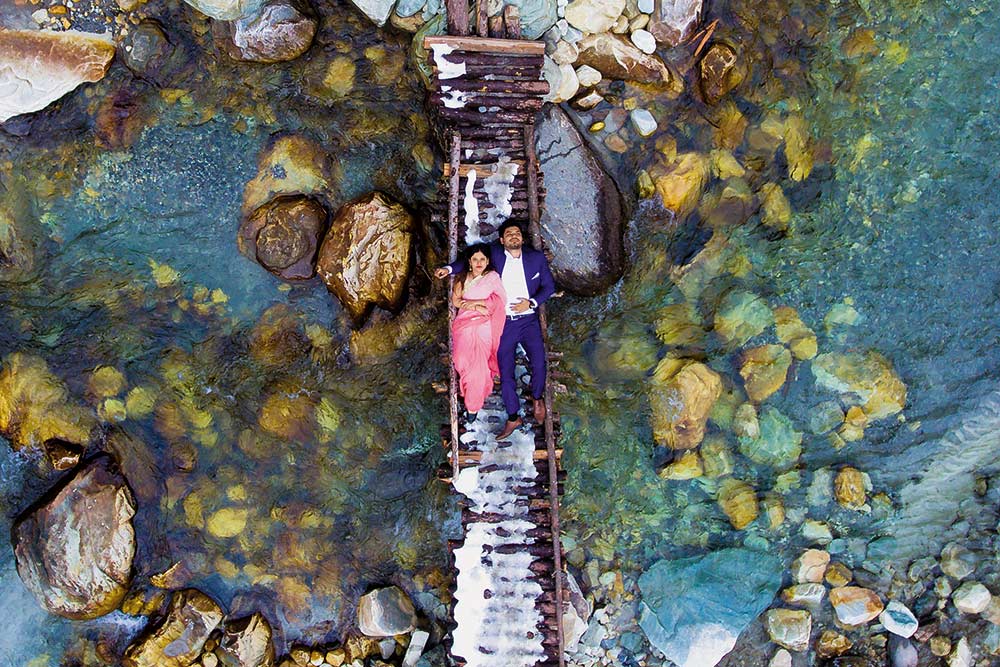 Ashutosh and Charu in Kasol.

Gaur has another example of how far people would go. A groom bled from the nose during a shoot in low-oxygen Ladakh, but the shoot went on. An assistant wiped his nose clean before each click. Why Ladakh? It is just to recreate a scene from Jab Tak Hai Jaan in which Shah Rukh Khan posed along the Pangong lake. Then there is Taj Mahal, the ultimate romance. But permissions for commercial shoots are not easy. So, clandestine shoots are held. Gaur clicked a couple’s pictures on their 23rd wedding anniversary. Not all shoots go as planned. In April, a couple in Kerala had to be rescued from a river as they fell from the boat during a shoot.

In this lust for the outlandish, Janaki Abraham, associate professor of sociology at Delhi University, observes a major shift. “The nature of performance in wedding ceremonies has changed. Earlier, it was done for the people who witnessed it and in doing so, legitimised it. Now those documenting it have taken precedence.” Sometimes the rituals are repeated for the camerapersons. Also, people believe a wedding is the most important rite of passage. “As a consequence, people across classes spend much more on weddings than they can afford. Many take loans to ensure the pomp.”  The neo-middle class is the foremost buyer of this service—once a preserve of the moneyed elite. The democratisation of wedding shoots has driven the elites away to simple portraits and un-choreographed stills, photographer Ramit Batra says.

If spectacle is what the clients demand, there’re dozens willing to feed the ostentation—like the moon’s surface created with white sand on a studio floor, with the blue earth in the backdrop. Editing software opens new horizons: a levitating couple, or miniaturised photography, where brides and grooms sit on a leaf. Some couples shoots along a scripted storyline. Photographer Vishal Arora rec­alls a “gangsta” meeting his bride and becoming a good man. Atrangi is Anna Rascala. Mind it!