Some would ‘dye’ for a silver strand, some won’t turn a hair 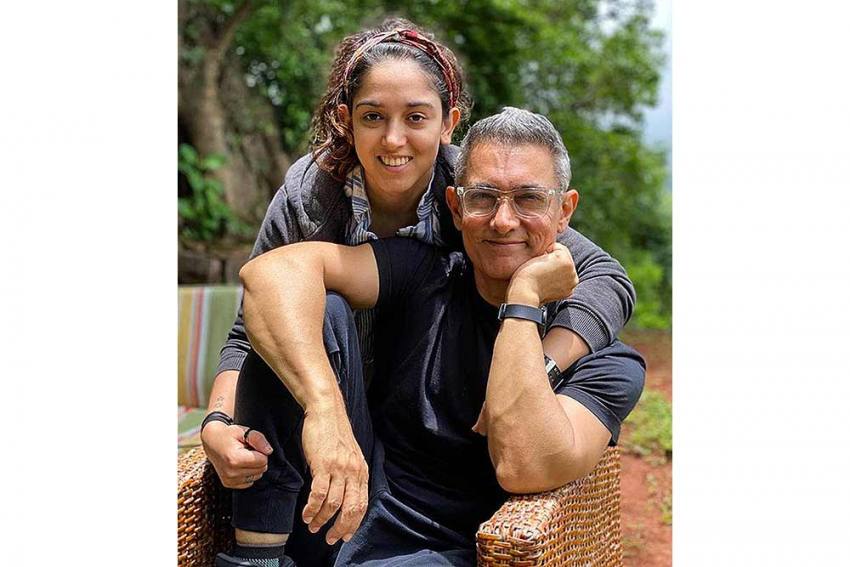 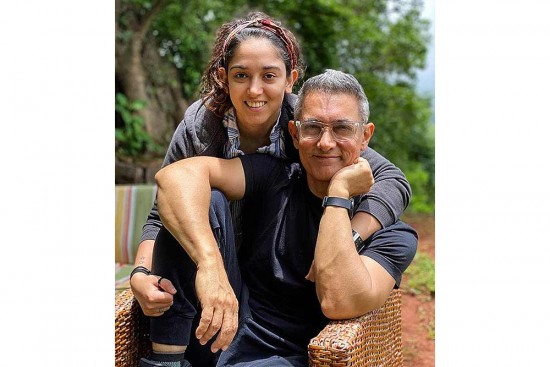 If a single strand of silvery keratin follicle makes your hair stand on end, make it stand out. Like Aamir Khan—ageless at 55, posing with daughter Ira on Father’s Day; black tee, joggers, glasses and a mop of salt and pepper to look his age. A Bollywood star’s stay-at-home style! Well, the coronavirus-spurred lockdown has been the harshest on people’s hair—that jewel in the crown the Kingdom of Goldilocks invests a fortune to protect and nourish. Salons were shuttered, hairstylists sequestered, and even the neighbourhood barber had vanished. You can shut down hairdressers; you cannot order hair not to grow. Those who had invested on a trimmer went DIY. Those who didn’t found their crew cut mature into a mullet. Some found help in their partner for the clip and coif. Like Anushka Sharma, with a pair of kitchen scissors and a dream, gave Virat Kohli a snip, while the self-made Sachin Tendulkar sorted it out all by self: “From playing square cuts to doing my own haircuts, have always enjoyed doing different things.” Politicians and their families got some self-reliant grooming. Uttar Pradesh basic education minister Satish Dwivedi went snippy-snippy cut-cut on his son and daughter. Didn’t go well for daughter but son looked fine, he appraised himself. Do women score better with scissors? Perhaps, yes. DMDK leader Vijayakant’s wife Premalatha shaved his scruffy beard, coloured his hair and moustache, clipped his nails and gave him a pedicure as well. In Jharkhand, Dumka deputy commissioner Rajeshwari B. did a fine job trimming her husband’s hair after he “messed up on the kids’ hairdo”.

But not all fretted about split ends and frowned upon the overgrowth. Mrs Mehta from a quiet Delhi suburb east of the Yamuna worried about the fading dye. “What a hag I have become,” she would wonder and panic each morning while she fired up the tea pot. Similar scenes played out at households around the closed nation. For all its grey starkness, many were anxious about the silver streaks showing up, the colour sachets running out. Some went for quick fixes like homemade henna and hibiscus juice. Until parlours reopened with masks, hazmat suits, tanks of disinfectants et al. Some didn’t give a damn. TV actress Seema Mishra was one—doesn’t mind letting people see her natural grey hair. “I don’t have to fuss about going to the salon. I am glad I am safe. I am grateful for that.” 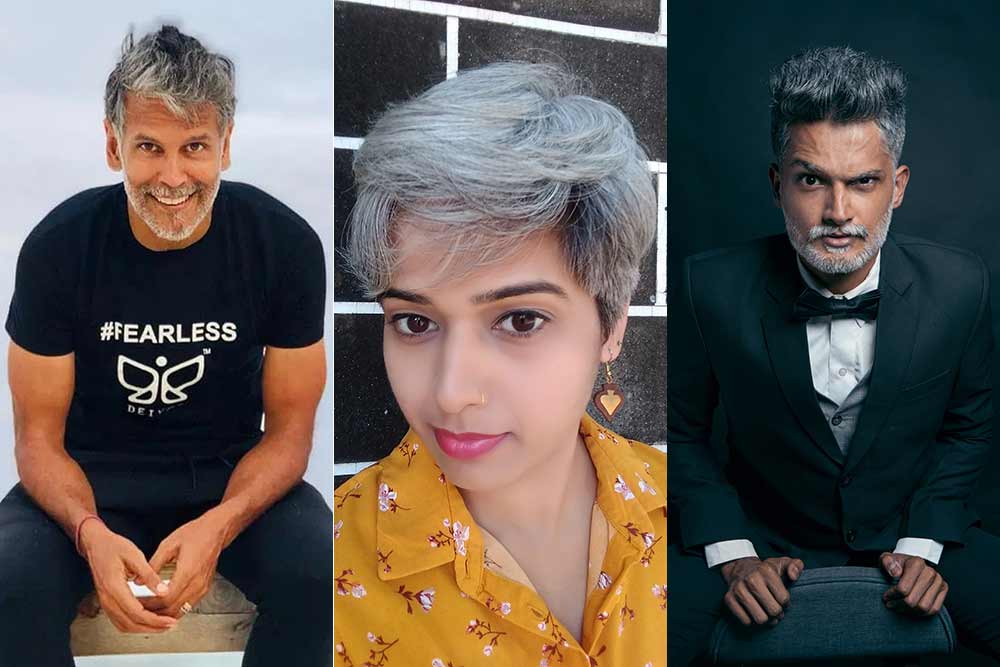 Seema’s mountain full of confidence provides a sharp contrast to Jane Fonda’s hair epiphany at the Oscars this past February. The diva’s grey hair was something to ‘dye’ for—she took seven hours to transform from blonde locks to funky icy. Hidden under those practiced brushstrokes of paint, the born-brunette-dyed-blonde has three inches of natural whites, characteristic of the inevitable process of ageing. She is 82 and still not completely grey. But her hair hue has deeper roots—that our die-cast sense of beauty is directly proportional to the amount of black, blonde, brunette, red (colours we are born with) on our heads. That organic white is a no-no; it’s a sign of old age: a primal fear.

Such signs are getting anachronistic, turning on their heads. More and more people are getting comfortable with grey, learning to age gracefully. Head-turners like Milind Soman are happy to be a silver fox—saying no to henna and hydrogen peroxide alike. Milind is a role model for the au naturel (the hair, we mean, not that nude shot with Madhu Sapre and a snake wrapped around them 25 years ago). Comb outside Milind’s honorary spotlight, there’s an increasing population of people at ease with their shades of grey. “I don’t understand what this big deal with black hair is?”

exclaims author, journalist and educator Lalita Iyer of Mumbai, who started greying in her thirties, but made a conscious decision to stay off colour. Like all camouflages, as the anti-dye collective says, hair paint is fakery. Iyer underscores the vicious cycle: ONE, parents start colouring their hair, mostly out of social pressure to hide the whites; TWO, the children aren’t aware of their mom or dad’s dye job most of the time; THREE, the parents find it difficult to get out of the closet, fearing causing trauma to the kids because of the sudden visual transition; FOUR, they continue to colour their hair every fortnight or month. RESULT: A grossly disproportionate visage—wrinkles, wattles and wobbly fingers, with a head-full of dark hair. And thus, a warped perception of beauty is seeded into young minds, which hardens into a conviction and it carries to adulthood, and the next generation. 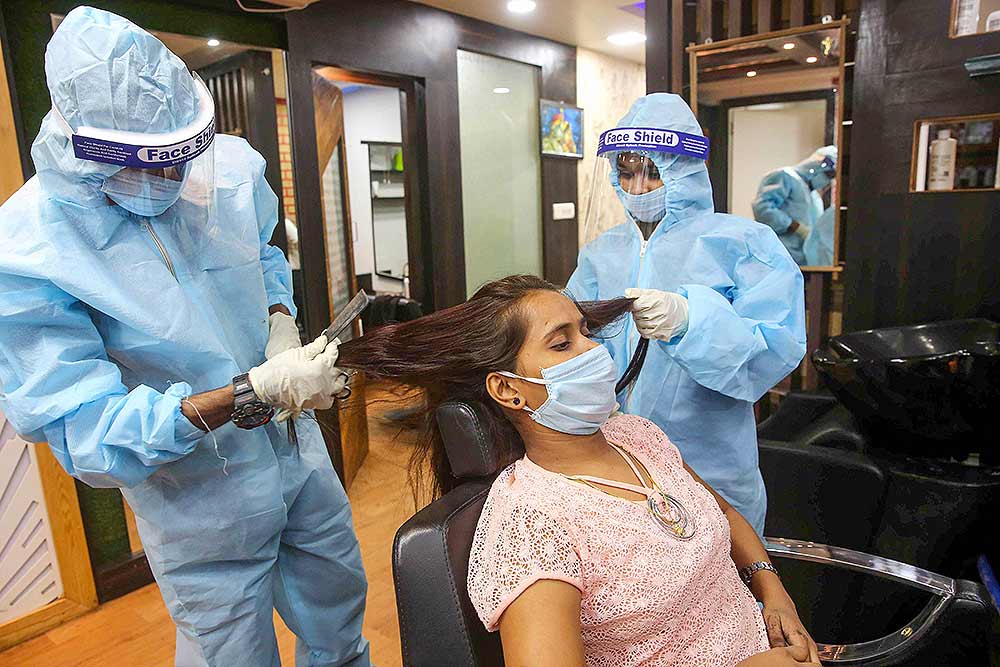 Iyer illustrates the paradigm. A friend’s daughter once popped the inescapable question. “Ma, how old is Lalita aunty? She has so much grey hair. She must be older than you, no?” It sounds hyperbolic, but such kids grow to live in boxes of old/young, tall/short, black/grey, fat/thin.  Iyer explains: “Life is not about binaries. It’s important to send out this message to kids. I often get told that I am really gutsy to go all out with my grey and women wish they could do it, but they cannot summon the courage to stop colouring, because they get sucked into ‘what will my child think’?” So yes, she let go the opportunity of looking 40 at 50, “but seriously, what’s the big deal?”

Absolutely no big deal, if you were to ask 38-year-old blogger Anjana Dubey from Ajmer whose blog sparklingsilver.com screams her attitude. She covered her greying top for around 20 years, until the snap moment in 2018 when she discovered what it’s like to love your natural look. She documented her greying journey on Instagram. “I was a victim of depression. My grey hair could be one of the reasons. Isn’t it shocking for a 13-year-old to see silvers popping on her head? I thought I lack something and it was not normal.” Much before Dubey found her genetics playing tricks, hiding the grey became a task. “I started with henna. Eventually my hair turned down henna. The dye came. It gave me fake confidence for a few years, but every time the grey roots showed, the confidence started shaking.” That confidence is built on the belief that women with grey hair don’t feel younger, sexier and more fashionable. Dubey’s husband encouraged her to shed the mask. “I could always read in his eyes, ‘Yes you can’.”

Ageing is a privilege, if taken positively. Whining about society’s views on stereotypes seldom helps. Time changes, as do old beliefs. If grey equals to old, why would young girls and women dye their hair silver? Why not embrace the natural silver and flaunt it with style? Model Arihant Nahar aka White Beard struts his white hair in style. It wasn’t that easy. For a Mumbai high school kid to wake up to an early onset of full-blown greying hair was depressing. He walked into class to a jeering ovation of “buddha, buddha” every single day. The assault was two-pronged—bullies plus pokey well-wishers with tips. A battered Nahar chased numerous medical and herbal solutions. “I wanted to fit in. If you ask me what changed, let me take you back to college.” It was Pune, summer of 2015, his first day in college. Nahar says: “You should have seen the look on their faces. Remember Freddie Mercury onstage, all eyes on his flamboyance. Suddenly it dawned on me. New city, new faces and I could be anyone. I could be me. I became White Beard, easy to locate in a crowd.”

For the shock of hair, the best “hairline” (the follicular equivalent of a tagline) comes from actress Taapsee Pannu: “And they have a life of their own.”