One of India's leading tabla players, Uttam Kumar fan Pandit Tanmoy Bose is inspired by fusion artists like Sivamani and loves the Western music of the Beatles and Bob Marley 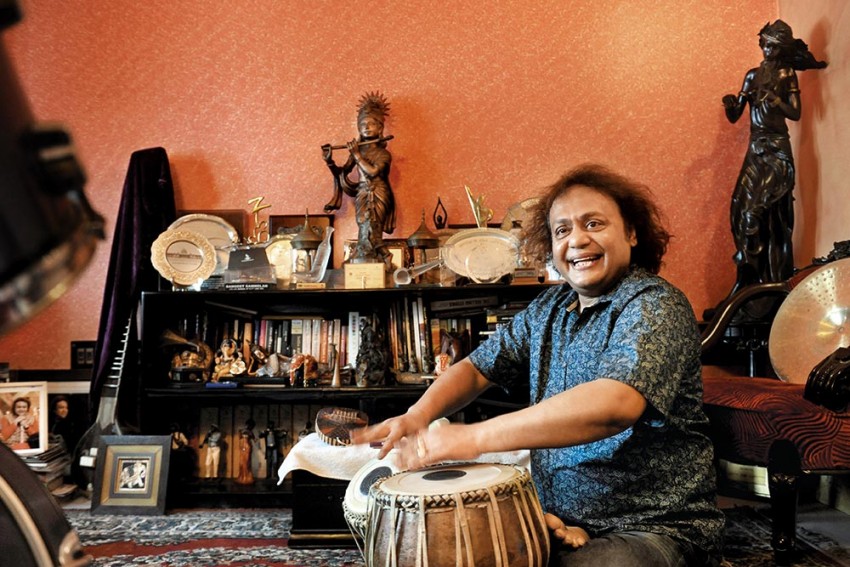 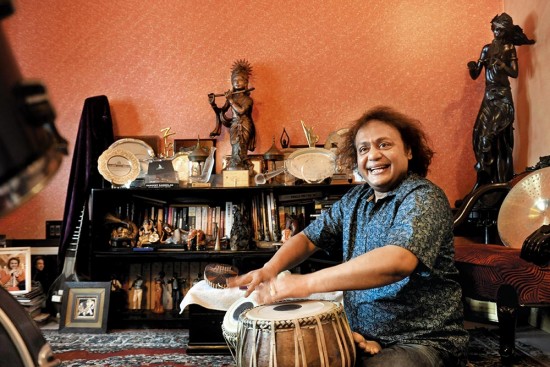 “Look,” says tabla virtuoso Pandit Tanmoy Bose, slowly moving his index finger along the rim of a half-filled glass of water, “listen to what happens”. I prick up my ears, and a piercing, whistling sound rings out. I’m flabbergasted—it seems almost magical, and when I try my fingers at it, I fail miserably. Pandit Bose bursts out laughing. “You need to practise a bit!” he says, adding, “Do it at the right frequency, and that glass will shatter.”

The exchange sums up the experience of spending time with Bose, one of India’s foremost percussionists. Warm and brimming with knowledge, the maestro guides me through the routine of a day in his life as through the story of his life.

Bose’s home is near the noisy Gariahat area of Calcutta. One cuts through the noise Puja shoppers, past expansive haw­kers, and enters, through wrought-iron gates, a quiet, bluish-grey building complex. It was built on the same patch of land where the garden of Bose’s old family home, and seems to radiate the air of verdant tranquillity the garden must have had.

Bose welcomes me on the top floor with Bonnya, his wife, and their golden retriever, Pogo, by his side. The spacious room is adorned with colourful patachitra motifs on a pillar and bright lotus flowers painted on the walls, where hang myriad instruments from around the world. “This is the paglamo (madness) of my wife and I,” he laughs. 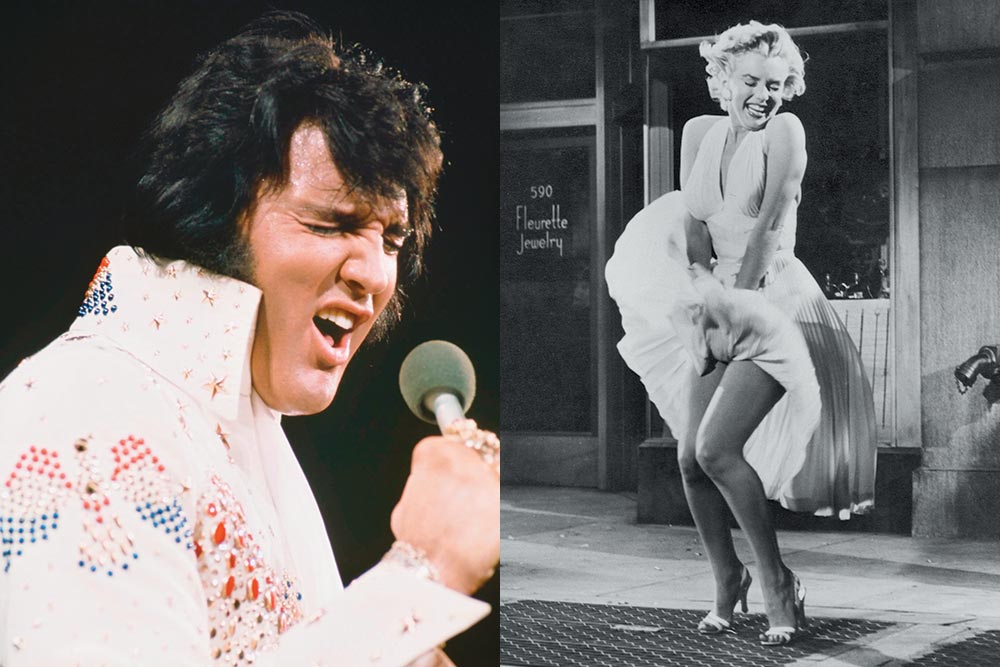 When he is not on tour, Bose’s day begins by watering the plants on his terrace, with Pogo by his side. Hibiscus, butterfly peas, bougainvillea and jasmine, including the Bengali festive favourite, shiuli, stand in rows against the parapet. He is an early riser, preferring to be out of bed by 6; he has to have either a cup of tea or a special blend of coffee brewed by Bonnya first thing in the morning. Then, it’s time for riyaaz.

We sit at a small and cosily furnished studio room next to the living room in the apartment; it is small and cozily furnished; books about Elvis, Marilyn Monroe and Satyajit Ray, among others, line the shelves; a soft carpet muffles noise; Rajasthani dolls hang from the curtain rod. But, for the most sacred part of an artist’s routine, he prefers to retire to the old house. His riyaaz happens in a tiny room with a set of grilled doors, on the mezzanine floor, reached by a tightly turning staircase. He has been using it from his school days. “I had to practise for an hour every day before getting ready for school,” he says—a routine involving rising at 4.30 am every morning for over a decade.

Tradition combines with a sharp sense of globalism in Bose’s music, which is heavily fusion-oriented. From the beginning of his career in the 1990s, he has absorbed a vast range of music to assimilate into his own art, rather like a magpie. He prefers popular culture to the classical tradition when it comes to Western music, choosing Belafonte and the Beatles over Bach; an ardent fan of Bob Marley and the Wailers and rasta, jazz and the blues, he loves Mickey Hart, Buddy Rich, Pete Lockett and Terry Bozzeo. Fusion artists like Trilok Gurtu, Sivamani, Taufiq Qureshi and Ranjit Barot are inspirations.

“Indian classical music will always have its own place, but this mix-and-match personality of contemporary music is attractive to youngsters,” he says. “To stay rel­­evant, you have to look for this elem­ent of attraction and make it your own.”

It is time for Bose to head to the studio to record along with his band Taal Tantra for his own albums, as part of a collaboration, or for a feature film or TV show: “I enjoy taking my time to explore and experiment,” he says. 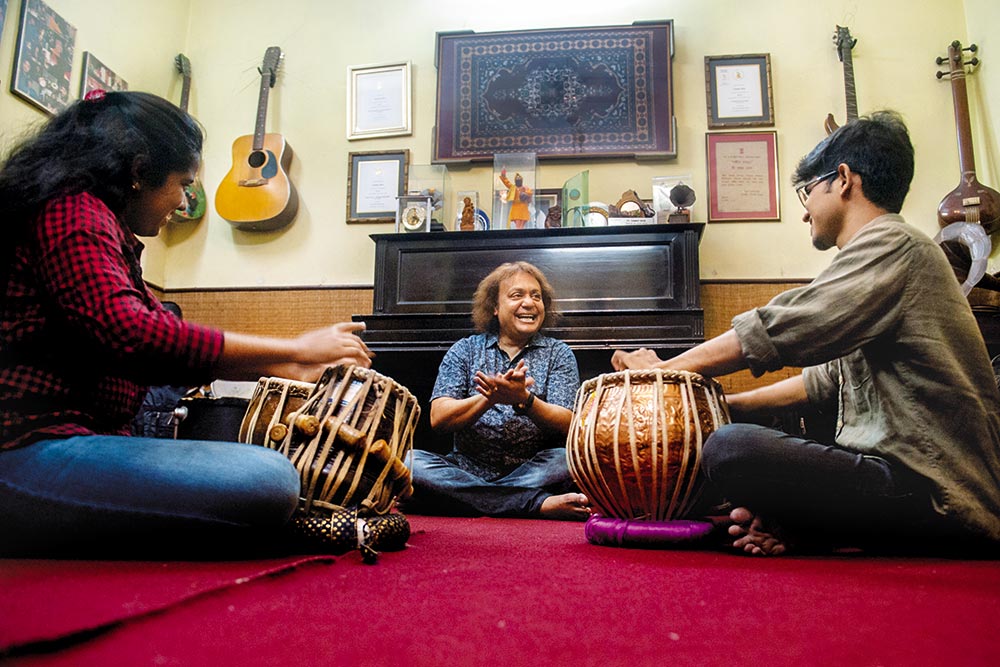 Tanmoy Bose with his pupils Anushka and Pubarun in his classroom.

Bose was initially a singer, but when he was around 10, his voice was affected by a bout of pharyngitis. He always played the tabla to learn how to maintain loy, or rhy­thm. Soon, he shifted to percussion full-t­ime. Fortunately, he had renowned gurus like Pt Kanai Dutta and Pt Shankar Ghosh. Crucial, too, were the musicians he wor­ked with—especially Pandits Munawar Ali Khan, V.G. Jog, Ravi Shankar and Amjad Ali Khan—who nurtured his talent.

His long-time association with Ravi Shankar made a deep impact on Bose. He speaks of the elder Shankar reverently, rem­embering him as a generous, immensely hum­ble man whose teachings in music and life he will carry with him forever. “I spent eight months a year touring with him throughout North America and Europe for 14 years, playing with him at Concert for George, at the Hollywood Bowl and at his final concert at Long Beach in California, in 2012, where he performed with an oxygen cannula, were some of my proudest mom­ents,” he says. He lavishes praise on Ano­us­hka Shankar as a person, musician and per­­f­ormer, calling her a ‘shrutidhar’—one who can play a tune simply by listening to it.

To Bose, who has benefitted from the tut­elage of so many, teaching comes naturally. Much of his afternoons are spent in the gro­und-floor classroom in his old house: lined with a colourful carpet, decorated with giant drums. Pictures of Bose’s performances hang on the walls, including one with Dhani Harrison, Richard Gere and the Dalai Lama.

Anushka Nandan, a class 10 student and Pubarun Basu, who reads English Honours, have been Bose’s shishyas for long. When they begin playing, their enj­oyment in the music is palpable: they smile at each other and at their instructor. 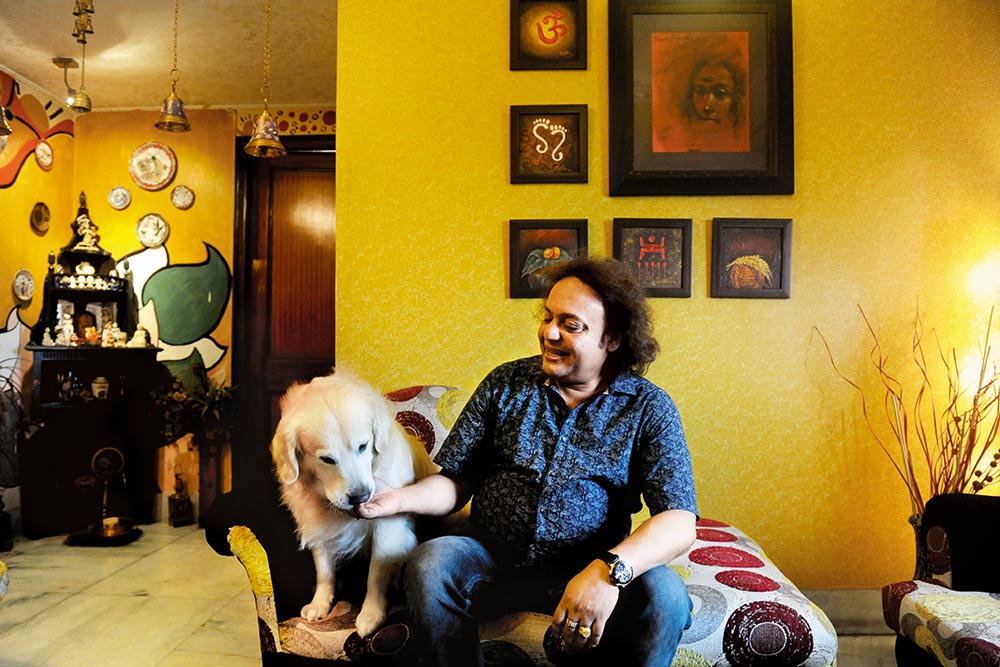 Playtime with Pogo, his golden retriever.

Bose is especially supportive of female tabalchis such as Anushka, given that few parents allow girls to take up the tabla. “It’s a simple question of a mindset change,” says Bose, as he exhorts Anushka to keep up the energy and use more force. He is also deeply involved with the teaching of many specially-abled children, with whom he recently organised a performance at Calcutta’s Indian Council For Cultural Relations (ICCR). “It’s like therapy for those children—even the bol helps them to overcome issues such as speech difficulties,” he says proudly.

During rehearsals, which, for him, often take place at the close of the day, Bose’s band members enjoy jamming together, exploring new sounds and discovering new rhythms and variations, building up the chemistry that is so crucial to a good performance. They also appear to goof around; as sessions wind up, occasionally bullying new members into footing enormous bills for team dinners.

Evenings are the quietest times in Bose’s day; he spends it mostly playing with Pogo, chatting with Bonnya, drinking coffee and watching movies (Hachiko being a particular favourite). Now that Bonnya is at home more regularly, working as a music curator rather than a corporate employee, the two unwind together in relative peace.

Until about eight years ago, this was not the case. Intensive rehearsals would be followed by the arrival of notables from the city’s arts and culture circuit for typically Calcuttan adda sessions—starting at 9 or 10 pm, they would go on till 3 in the morning. The new timetable brings a kind of discipline, but it is not without its faults. “Now I’m in bed by 11 pm, and my friends make fun of me!” he says ruefully.

The strictures of routine are non-binding though, given the frequency with which Bose travels; the day after we speak, he sets out on a brief US tour. He enjoys deman­ding schedules, finding something to love everywhere: his love for Japanese cuisine, for exam­ple, led to his resta­­urant, Wasa­bee—one of Calcutta’s first Asian diners.

As our day wanes, I ask him if he could spend a day with someone, who would it be? “Panditji,” he replies instantly, referring to Ravi Shankar. But what about someone he has never met? He bursts out laughing, and then says, “Uttam Kumar. The man was one of the greatest actors of his generation...any generation. None can ever match up to his stature.”