SEBI is getting active in its role as regulator. Is it doing right? 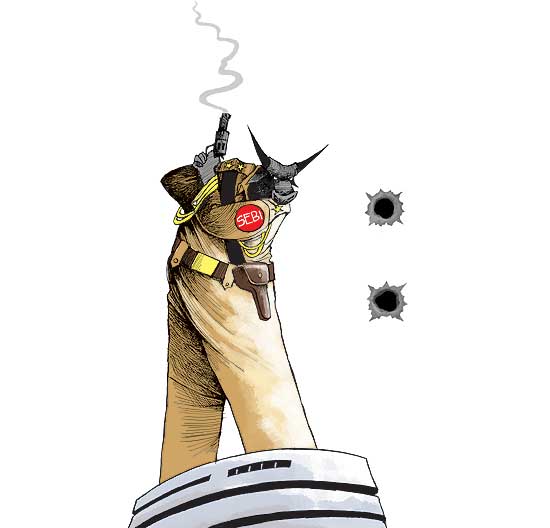 These are tense days to play—or police—the Indian stockmarkets. Fuelled by foreign fund flows, the markets are well close to lifetime highs. But the   celebrations are muted. Most experts do agree that the market, driven by a few players and pumped-up valuations, is setting itself up for a hard fall. Adding to this state of nervous anticipation is a hyperactive market regulator, SEBI, which has been busy reforming and regulating the marketplace.

Over the past year, C.B. Bhave, the SEBI chairman, has effected a complete change in the business model of the mutual fund industry and compelled a recrafting of unit-linked insurance products. More recently, SEBI has targeted some foreign institutional investors (FIIs) for not meeting disclosure norms; it has also sought to discipline market players by putting in place a code of conduct, which has sparked off a raging debate.

“KYD norms seem to be duplicating what is already being done to register distributors with MF companies.”
Krishnamurthy Vijayan, MD, IDBI Mutual Funds

If SEBI has had a busy year, it’s been an equally difficult time for market players to keep up with these enormous changes. Sure, there is resistance to any change. But the sense of disquiet by some players is driven by a lack of faith in the regulator’s ability to implement and police the kind of ‘safe’ market it envisages through these regulations. Despite repeated attempts, SEBI officials did not offer comments on the issue.

The pertinent question here, however, is whether such micromanagement is necessary and critical to the health of the Indian markets. Most market participants have begun to appreciate regulations, given that one of the key reasons India escaped the brunt of the global financial crisis was due to our regulators. “I believe the market really needs discipline. People have an issue with the regulators’ measures because they are resistant to change. We need further regulation because people have turned money-making into a business,” admits Parag Parikh, head of Parag Parikh Financial & Advisory Services.

In some cases, there’s been vociferous support for SEBI. For instance, the ban on 197 FIIs and 342 sub-accounts from fresh buys in the markets. “If these organisations are willing to make these disclosures for other regulators, why not for SEBI?” asks the head of a broking firm. The FIIs were given a deadline to meet these disclosure norms and the ones that failed to comply have been banned from taking fresh positions (there’s no impact, however, on their current positions).

“I believe the market really needs discipline. Those who have issues with regulation are just resistant to change.”
Parag Parikh, Stock analyst, consultant

More controversial is SEBI’s proposed code of conduct, which will identify key people in merchant banks, mutual fund companies and brokerages, to name a few, who can be held responsible for frauds or violation of norms. This is in addition to the proposed setting up of a common defaulter database that will carry information on past or ongoing frauds, investigations and defaults by market players. Dhirendra Kumar, market analyst and CEO, Value Research, says, “It is not clear how this will work in a market made of all sorts of players. Finally, it boils down to the legal framework and establishing the evidence of fault.”

Most players agree that implementation is the heart of the problem. “I commend SEBI for wanting to discipline the market. But market players get away scot-free by paying a small fine—where is the impact on the profits made through ill-gotten gains? Where is the deterrent in ensuring that such behaviour is not repeated?” questions Arun Kejriwal of kris. Analysts cite examples of cases of manipulation of stocks and ipo prices by several players in the last two years where no one has finally been held responsible or punished.

Anup Bagchi, ED, ICICI Securities, says, “Many big players and FIIs already have a code of conduct, so there is a big deterrence if the conduct is broken. But has that been fully successful in checking fraud and unfair practices in the market?” On the corporate side, despite restrictions and a code of conduct put in place by SEBI itself, news on stocks is routinely leaked out, significantly affecting prices at the cost of investors, primarily retail investors. Also, as market operators do business through different entities, SEBI always finds it difficult to identify the real people behind unethical practices.

“Many big players and FIIs are governed by a code of conduct. But has that checked fraud and unfair practices?”
Anup Bagchi, ED, ICICI Securities

Despite agreeing on the necessity of most, if not all, of SEBI’s reforms—market participants, in any case, don’t have any control over the process of regulation— there has been enough controversy about each of the changes proposed or put into place. For one, the frenetic pace of reform. In the mutual fund industry, for instance, from August 2009, when the ban on entry loads was put into effect, there have over 25 changes or additions in regulations or norms. Some of the latest changes include more stringent norms related to ‘Know-Your-Distributor’ norms (which means mutual fund distributors have to comply with a new set of rules regarding document verification and biometrics). “The KYD norms appear to be duplicating much of what is already been done to register distributors with mutual fund companies,” points out Krishnamurthy Vijayan, MD and CEO of IDBI Mutual Fund.

In other areas, like SEBI’s ban on entry charges and the major changes in the mutual fund distributor community, the jury is still out. Word on the street is that AMFI, the association of mutual fund companies, is looking at becoming a self-regulatory organisation, a move that several players say will only lead to greater powers in the hands of a few mutual fund companies. In the meantime, while the mutual fund industry continues to see massive redemptions, there is talk of the possibility of looking into a new incentive scheme for the distributors.

Snowed under by the weight of changes, players have been asking what exactly is SEBI’s role— policing, development, control or direction? In most cases, especially in a nascent market like India, the regulator’s role would encompass all of the above. Clearly, the best way to ensure development and soundness of the market lies not just in introducing but also implementing regulation. Without clear deterrents and a timeline to handle violations, all it will end up being is too much action, much too late.

By Arti Sharma and Arindam Mukherjee