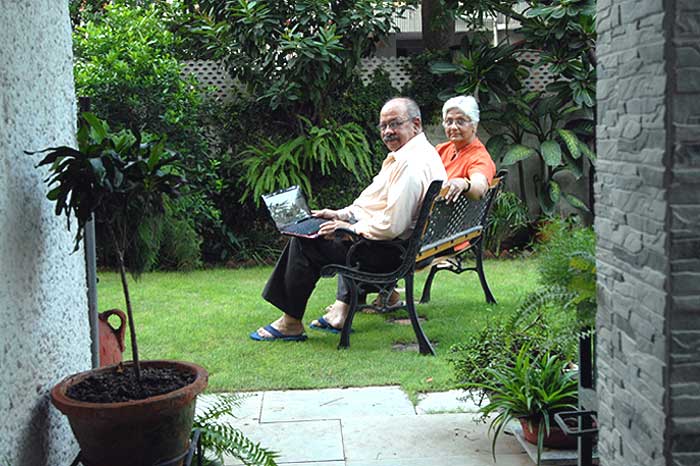 Their day begins with GM, goes on to ASLP and ends with ttfn. If your internet lingo is rusty, you may be unable to decipher that as Good Morning, Age/Sex/Language/Place (ASLP) and Bye Bye for Now (BBFN). But quiz a few senior citizens, and pat come their replies. For an increasing number of them, this is becoming their lingua franca, as they determinedly banish their deep-seated awkwardness with technology, and learn to lead a different, far more engaged life, turning every cliche about “retirement” into a thing of the past.

For one, the internet is visibly helping to bridge the generational gap. (After all, you’re bound to feel closer to a grandfather who writes “R u feeling better 2day?”on your Facebook wall). Usha Kala, a 65-year-old Delhiite, bonds over video games like Tropix with her grandson, even though, for the sprightly eight-year-old, “grandma is much too slow”. On the garden of their south Delhi home, the Kalas have even played host to friends they’ve met online, once in a way, mostly retired engineers, artists and scientists. Sometimes, to their delight, younger people also join in. “We discuss all kinds of topics ranging from the role of wives, grandchildren and medical miracles to the beauty of stained-glass paintings,” says Pradeep Kala, 69, who is heavily into social networking on
verdurez.com, a site exclusively for Indian senior citizens. Sushi Krishnamoorthy, 62, member of every social networking site from Verdurez to Facebook to Twitter, also likes chatting with younger members on the Ryze online network for a fresh perspective. “Age doesn’t play much of a role in the virtual world, the way it does in the real world,” she says. 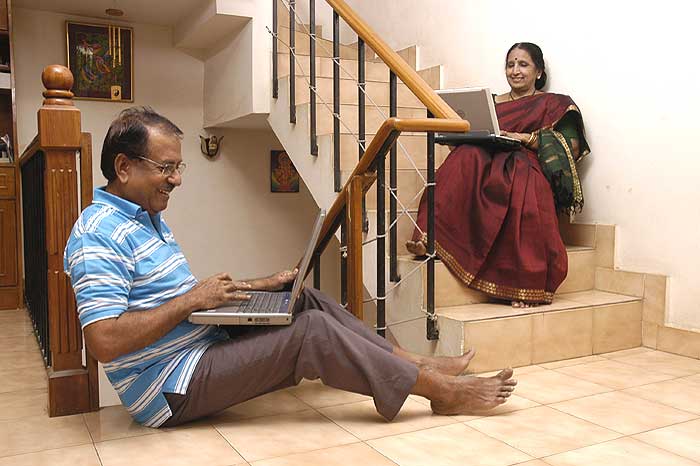 Net Gain: For Sushi Krishnamoorthy and husband, ten hours a day online is not enough (Photograph by R.A. Chandroo)

However, this new adventure doesn’t just end on the walls of Facebook, Twitter or on Skype. Older Indians, taking to the net at 60, 70 and even 80, are connecting not just with their grandchildren, some many continents away, but digging far deeper. For Chennai-based Sushi Krishnamoorthy, ten hours a day online isn’t nearly enough. Face-to-face, she might not have been daring enough to declare to friends that “Marriage is like a public toilet. The people outside are desperate to go inside and the people inside are desperate to get out,” given that, in her own words, “senior citizens are supposed to go to temples, do social service, and talk about moralistic things”. But on an online platform, she felt liberated enough to post this comment, and deal with the brickbats that predictably followed. On other occasions on the net, Krishnamoorthy has played matchmaker to two classmates she rediscovered online. More recently, she recounts in excited whispers, she even donned the avatar of another woman by creating a fake ID on an online messenger service, to solve an internet friend’s crisis. So much in love with the net is Krishnamoothy that she likes to communicate with her husband on Yahoo messenger—even while they are both in the same room. “He updates me on how the markets are doing and I tell him about things to be done in the house. And honestly, this way I have proof of what I’ve said to him and he can’t say that I never told him!” she chuckles.

“A dating site would get great response since so many of us out there are looking for just company.”

So are the 60s the new 50s, or even the new 40s? Perhaps. And if they are, much of credit surely goes to the internet, which allows anyone to explore new worlds, and cross barriers and frontiers, regardless of how old they are. And provides so much value to those with extra time on their hands. “There is a limit to how much golf one can play, papers one can read and TV one can watch,” exclaims Pradeep. Bangalore-based Shri Ram Ayyangar, 60, who finds himself getting restless without the internet, and keeps himself busy by blogging, couldn’t agree more. Another avid blogger N.K. Ravi, 62, based in Mumbai, says, “The mind is growing all the time, even when you’re old. It’s nice to continue to share experiences of my travels, my opinions on various topics, and make friends with other bloggers.” Yet another senior citizen in Chennai, who prefers to stay anonymous, loves playing ‘agony aunt’ for troubled minds.

Websites like seniorindian.com and verdurez.com, catering exclusively to Indian senior citizens, are tapping into this new interest, which is part of a worldwide trend. (Globally, while young adults are the most frequent users of the net, seniors are the fastest growing group, doubling by the year, reports a recent study.) Says seniorindian.com founder Suresh Bhimsingh, explaining a recent spurt of interest in his website: “With all the buzz around Facebook and Twitter, older people are becoming tempted to use the net more and more. I get daily calls, now, about old-age homes, and medical and financial information relevant to senior citizens, and I’m trying to put all this on the website. Adds London-based consultant Ishita Sukhawala, who started verdurez.com, which has over a thousand members, both resident Indians and NRIs, “I try to make sure that verdurez has something for everyone’s taste, including sex and seniors, adult humour, heath and nutrition, technology, grandparenting, education, and, of course, nostalgia.” Encouraged by the response, she is planning to launch a dating website for seniors soon.

That idea may not be as radical as it sounds. An elderly Delhiite confides, on the condition of anonymity, that some seniors are opening up to the idea of meeting prospective dates online. “A dating site would meet with a great response,” she says candidly, “because there are so many of us out there—umarried, widowed, divorced—who want company because families do not always have time for us.” Another senior citizen, male, tells us that he has already dated online, through Yahoo messenger, and in response to online ads. “But generally,” he observes, “older woman seem scared; it’s the younger ones who often take the initiative.” Typically, however, senior citizens use such services much more cautiously than their younger counterparts: when they meet like-minded people online who are open to dating, they are careful to check their antecedents before meeting in person. 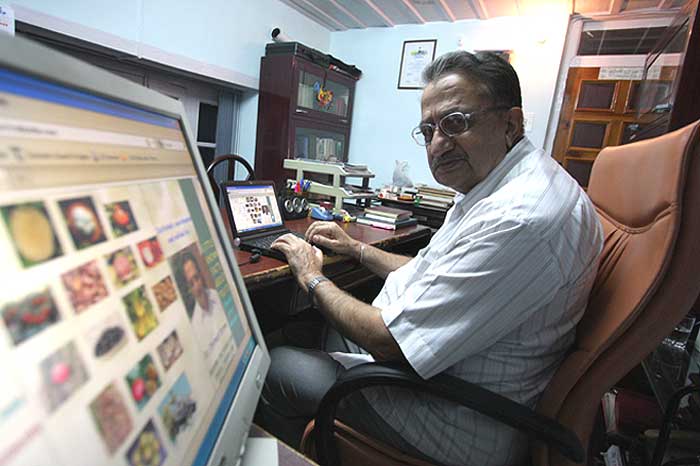 Some senior citizens, however, are looking for affairs of the mind, rather than the heart. Like Charu Haasan, 80. As a ritual, the retired actor and former lawyer goes online on his personal computer thrice a day: as soon as he wakes up, right after lunch, and just before bed. It’s only recently that Haasan has warmed up to the internet, mostly so that he can share his political views, through his writings, on an online writers’ forum. Meanwhile, in Mandi, a town in the hills of Himachal, 71-year-old Chiranjit Parmar, a retired horticulturist, has designed his own website, fruitipedia.com, right from scratch. Lesser-known fruits are his passion and he regales visitors with new trivia every Monday. This week, for instance, he tells the quirky story of Mungongo nuts, popular food for Namibian bushmen. Parmar is a member of several networking groups related to senior citizens, rare fruits and fruit-growers. Mumbai-based Shobha Mathur, though self-admittedly “mobile-challenged”, is superbly computer-friendly, having authored a series of e-books for senior citizens aptly titled Seniorgiri. “Many of my friends complain they have nothing to do so I decided to write an e-book on hobbies for seniors and now I’m working on another one on jobs for seniors,” she adds. This otherwise shy 66-year-old found herself easily making virtual friends, to discuss a new yoga aasana or health information. In the mornings, she often trades stocks online for her husband, and in the afternoons, she teaches basic computer skills to underprivileged women. “It’s just a mindset that you can’t teach an old dog new tricks,” she declares.

Parmar and Mathur belong to a generation that till recently seemed hesitant to fiddle around with technology. But, increasingly, they realise it’s just a question of breaking the ice. Many of them get off their feet playing a round of solitaire, which builds control over the mouse, asserts Delhi-based Rohini Khullar, a net buff pushing 60, who encourages many of her friends to get online to pass time more fruitfully, even if it is just to catch up on music of yore on Youtube. For many of them, it’s like viewing the world with a brand new pair of glasses.

A Final Ab-Solution For All