The DPC leaves in its wake a land destroyed permanently. Everyone has lost something for ever. 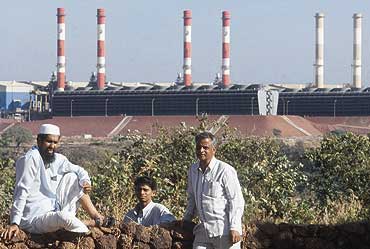 outlookindia.com
-0001-11-30T00:00:00+0553
A well-tarred road north of Chiplun town leads to the Dabhol Power Company's plant. The road is virtually empty—just a few vehicles pass by in an entire day. But the plant, on 610 hectares that originally belonged to the villages of Katalwadi, Anjanvel, Veldur and Ranvi, is an overpowering reminder of a marauder that irrevocably altered the history and geography of the land.

The region may never be the same again. Even after six months of the plant officially shutting down, the past haunts the locals and may pass away only to become folklore. Even then the changes in the topography will be permanent. Everyone here has lost something forever, it seems, as the locals tell their stories.

The plant was built on the ancestral land of 700 families. "The land was marked out in an office, not on physical supervision," says Vivek Vaidya, a well-off mango farmer. It didn't matter if a plot of land had a house on it, or an orchard or crop. The first man who opposed the goings-on was Hamid Chougule, whose 800 mango and coconut trees were uprooted one weekend as he couldn't get a court stay. The MIDC Act doesn't permit land acquisition unless 60 per cent of the landowners agree. Noor Khan Pathan, 47, who lost his total land of 1.2 hectare that supported his 12-member family, says that the law was casually violated. The deal is illegal as the acquisition papers do not have the signatures of the landowners. In protest, fewer than half the dispossessed have accepted the compensation. The Company has used barely half the acquired land. A discussion in the Maharashtra Vidhan Sabha in 1997 led to an agreement that unused land should be returned to the people. Now the Lok Hakk Samiti will stage an agitation on February 11 to make their point.

The Company's activities have adversely affected the region's water supply. Snehal Vaidya, ex-sarpanch of Anjanvel, lives on the hill that separates the village from the plant. His family's water needs had been taken care of for generations by a perennial springwater source. Today the water channels are brick red in colour; oil floats on the water. The Vaidya clan, which occupies four houses in the area, says that till the monsoons the water gave a foul smell, and the layer of oil was thicker. They claim that once they even filled their two-wheeler tanks with the "water" and drove to the next village. They conjecture that it would probably take another two monsoons before the water gets cleaned, but no one knows for sure.

Whispers from locals who worked inside the plant suggest that six valves of the naphtha fuel tank were left open. A reputed research institute collected the water from the village well and tested it as foul. But it would cost Rs 50 lakh of research to establish the source of this pollution, it says, even though there is no other industry around. The Company was ordered by the Court to supply water to the region. But that too is yet to come. Both Anjanvel and Katalwadi today depend for water supply on a gram panchayat programme. Even the course of the sea water has been changed by the Company—it constructed two jetties and a breakwater wall, affecting the flow of the creek, locally known as river Vaishishti, and other water bodies. A seasonal river in Anjanvel, for instance, today floods a good part of the village in the monsoon, something that never happened earlier.

"The local economy has been altered drastically," says Baba Bhalekar, sarpanch of fishing village Veldur. When the Company built its fuel jetty, which runs 1.5 km into the sea, it got the government to cordon off an area of several square km. So what was earlier a 10-minute boat ride is today a 10km expedition—they now have to negotiate a large semi-circle. More than half of the 3,000 fisherfolk here are marginal fishermen who use primitive dinghies or cast their nets from the coast.At the most, they have single-cylinder boats. As the jetty was constructed at the confluence of the creek and the sea, the breeding ground for fish, fish density is down to a tenth of what it was some years ago. Few fishermen have the financial muscle to buy larger boats for deep-sea fishing. Earlier, a boat shared by four or five people earned Rs 200-400 a day. It now earns a pitiful Rs 25.

Compensation was doled out to the fishermen at the rate of Rs 30,000 per person in lieu of a lifetime of fishing opportunity. As only half of them are registered, the rest, mostly the smallest of the small who could barely eke out a living, were left out. Like Yashwant Kamble, 65, who looks far older than his years as he combs the beach for shrimps along with dozens of others. His six-member family earns Rs 30 a day. Before the jetty came, it was around Rs 80 daily.

The steam from the plant's cooling tower, which went onstream in 1999, has blighted the mango crop. Every farmer claims he has had almost no yield for the past three years. Mehmood Ibrahim Mastaan, 73, used to be an ardent supporter of the Company when he was sarpanch till 1994. But he has "converted" since his annual mango crop earnings dwindled to Rs 30,000 from Rs 1.5 lakh. There is cement dust in the air from the cement mixing plant. Nirmal Vaidya takes us through her land where the leaves of the mango trees are coated with dust. Each of the four Vaidya homes have been losing an income of Rs 1 lakh for the last three years. The Company's operations have altered the ambient temperature by up to 5 degrees which the farmers claim has effectively ruined much of their crop, including rice.

DPC's Metagas project, from where gas was to be shipped to Hazira, is another bone of contention. Villagers allege they were handed a printed booklet about the project, which didn't talk of the potential hazards. The villagers wonder aloud as to why the visiting officials stayed in quarters that had three layers of protection—a stone wall, a second layer of brick and then thermacol—to ensconce them if there was no danger.

The courts had ordered the Company to provide a school, a hospital and a technical training institute. Of these, only a hospital stands, that too clearly for those who worked in the Company. "We cannot afford the treatment," says Atmaram More, Anjanvel sarpanch. The last doctor here is packing his things to get back to Mumbai.

Divide and rule, More says, has always been the foreigner's principle and the Company was no different. It created pockets of satisfied people, people who were bought over and helped break the villagers' unity. So, in Vanvase village, the Company leased land for five years and paid the people Rs 2.5 lakh per hectare. It gave aid to schools and Rotary clubs in Guhagar town and broke the opposition's spine. Labour was sourced through contractors, some of them locals. Abdul Qadar Pangarkar is an example. A Republican Party of India man, he used his connections to get contracts and took home Rs 1 lakh a month in his heyday. Today he owns the smartest house in the village and chauffeurs his family around in a car. Now with the Company shut down, he has strategically moved his weight behind the opposition. About 100 local families acquired contracts for activities like quarrying and canteen services. All are apparently politically linked to the bigwigs in Mumbai and Delhi.

The labourers who found jobs through such contractors earned Rs 4,000-6,000 per month. Like Jaiwant Saitwalekar, 24, a graduate, who is now the secretary of the local fishing community in Anjanvel. He worked as labour for two months after his family fishing business began to fail. He earned Rs 105 per day till he felt he needed to support his people and left the Company.Others with no education could hardly think that way. Three and a half thousand people of the region worked as contract labour till May 1. Two hundred of the land-affected were to be offered jobs directly as per the court orders. A fourth opted for this and averaged Rs 2,500 a month.

"Not only our economy and ecology, the Company has destroyed the social fabric of our region," says Bhalekar. He only echoes what we hear from a host of other people. Brothers are fighting amongst themselves, fathers and sons are not on talking terms. People are cheating their own families for the money. Bhiku Ganu Bane, a 75-year-old illiterate, does odd jobs for More for a living. His nephews negotiated the deal with the Company and left him penniless. Every fight or dispute in the villages, says Bhalekar, ends up centering around the Company. Locals are stunned to see their young exposed to vices like narcotics. "Every vice flourished with the Company's endless financial resources," confirms the wife of a senior Company employee. "We have witnessed corruption of the soul in every possible way." Senior employees took their cuts on every supply and sale of goods from scrap to water to labour. Even the most modest labourer was provided mineral water. This vulgar display of money power was a constant reminder to the villagers of what they were missing out on.

Six months after the Company shut down, Bhalekar believes that life is gradually returning to normal. People are again focusing on their next day's earnings. Most of them claim that they pardon those who got carried away as they are their brothers, after all. But behind their closed doors, the scars they reveal are deeper. They are enraged with those who went along with the Company and made money at the cost of their people. The agitators hold their heads high but their modest lives stand in stark contrast to the ones like Pangarkar's.

As the sun sets over the sea, the power fails. The villages are in total darkness and the people not sure if it will be restored that night. "The Company left us with no development and robbed us of our innocence," says a senior. Today they await electricity and justice, in that order.