Enigma Of The Architect

In Pakistan, a 'settled fact' is that the Qaid-e-Azam was secular...but he had his moments 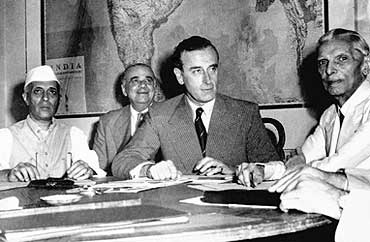 outlookindia.com
-0001-11-30T00:00:00+0553
When L.K. Advani left Pakistan for home only to get entangled in a raging controversy over his remarks on Mohammed Ali Jinnah, there were many here who wondered about the peculiar inclination of Indians to rake up 'settled facts' of history. Revered for propagating the two-nation theory through which he midwifed the birth of Pakistan, Jinnah has always been considered a secularist here who was dismissive of the mullah's narrow worldview.

Says historian Dr Mubarak Ali, "Jinnah believed in the two-nation theory, and struggled for the creation of an independent homeland of Muslims on the very basis of that theory." Political scientist Dr Hassan Askari Rizvi agrees, citing Jinnah's 1940 article in a British weekly, Time and Tide, and his speech at the 1940 Lahore conference of the Muslim League during which the Pakistan resolution was adopted. "On both occasions, Jinnah clearly stated that Muslims of the subcontinent were a nation entitled to a homeland," points out Rizvi.

However, I.A. Rehman, director, Human Rights Commission of Pakistan, feels Jinnah's two-nation theory lacked clarity. He explains, "Statements like only Muslims in the Muslim majority provinces of India constituted a separate nation while the rest of the Muslims were not part of that nation makes his theory difficult to sustain. That's why he bid goodbye to it at the first opportunity, on August 11, 1947—in his speech to the Constituent Assembly."

Others feel Jinnah's political philosophy evolved over time, in response to the changing nature of the anti-colonial movement. For instance, columnist and ex-editor Rashid Rehman says "there were two Jinnahs. The younger one, a nationalist, was dubbed an ambassador of Hindu-Muslim unity because of his efforts in keeping the independence movement united". But at the same time, he was also a constitutionalist and a democrat of the old British school. "He incrementally had grave reservations about Gandhi's use of religion and mass mobilisation as the means to Independence. Jinnah took the view that Muslims constituted a separate nation, soon emerging as the champion of the rights of an increasingly insecure Muslim minority."

Two-nation theory apart, most believe Jinnah was a 'staunch secularist' in his private life. "But," as Dr Ali points out, "he believed in using religion to achieve his political ends." A model for Advani, some may quip. Imtiaz Alam, secretary-general, South Asia Free Media Association, feels Jinnah conceived Pakistan as a progressive nation-state which was not to tolerate obscurantism.

Rizvi, however, says the binary of secular-religious doesn't apply to Jinnah. He argues, "Jinnah was neither for a religious or orthodox Islamic state nor for a secular system in the classical Marxist terms. His view was that Pakistan would be a modern, democratic state which derives its ethical formation from Islam." Adds prominent Parsi businessman Behram D. Avari, "Muslims tend to reason that what passes for democracy and hence constitutionalism is at the very heart of Islamic teachings. With this in mind, Muslim League leaders sought to fit Islam into their contemporary constitutional design, not the reverse. Jinnah's speeches are filled with references to the Islamic principles of social justice and fair play, but he made it clear, on more than one occasion, that he was against theocracy."

Partition Of A Party