End Of An Insurrection

She was hope for women down there. Her death symbolises victory for oppression. 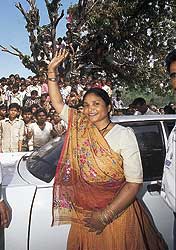 outlookindia.com
-0001-11-30T00:00:00+0553
Phoolan Devi is dead. Brutally shot down on her doorstep, coming home from Parliament for lunch. Sitting on a balmy summer day on the river bank in Cambridge, I find it difficult to believe. But it is all too real—India's caste and class animosities are alive and well.

The Hampton court-like maze of dry, sandy, unyielding ravines on the Chambal is where she grew up. The villages perched on high banks are a cauldron of poverty, passion, caste, class and cold animosity. The strong perpetually wrong the weak. Vendetta, revenge and justice, only through the gun, has been the sum total of life for those unfortunate enough to live there. Nothing has changed over the centuries. The boat people (Mallahs) so low on the power ladder—what chance could they ever have in that survival pit? Phoolan's life is now well known—the hunger, poverty, abuse of every kind in the village, the sale to a 45-year-old consumptive of an 11-year-old girl and all the horrors that followed. She did turn like a tigress and take up arms against a sea of misfortunes. Is it any surprise? Then the surrender. The red bandanna and the smouldering rebellious eyes in the historic picture are not easily forgotten. But what is easily ignored is the fact that she spent 11 years in jail, when lifers spend eight actual years at the most. She had paid her debts if any were due.

The book and the film gave her world recognition. Her murder figures in every paper, including the Financial Times, and every TV channel. She became a member of Parliament. A symbol of the oppressed rural Indian women. Someone whom the women out and down there could look upon as a hope and possibility. She quickly learnt the little tricks of our politics, and more than held her own. And yet upper-crust India, the Capital's chatterati would not accept her. In my recent job I got enough invites to nose around in the elite feeding-troughs. The talk invariably turned to politics. Then the moaning—how can we progress? Look at our representatives. How can Phoolan Devi be there? The assumption always was rural India does not quite fit in those teak-panelled halls. We know best. Yes there should be more women, but women like us. I argued hard for her and others like her. India's colours and concerns from the cruel baked land must sit in Parliament and evoke the cry of the damned. In what way was she less entitled than the rest of them? Was she not chosen by the people?

Since the fifties of the last century we have lived close to the Chambal ravines in Shivpuri. I was a boy when 'Robinhood' Maan Singh trod the land. I have followed the tragedy of the ravines. The Chambal or Champaner, across the land the problems are the age-old ones of poverty, oppression, injustice and the lack of fair, timely redressal. Phoolan Devi's was not the only tale of horror and it did not end with her. The sad situation continues across the land. The women head the list of sufferers. We can improve the situation only by putting women in large numbers in the seats of power and representation. They must come from all corners of the land, from all classes, castes, colours and complexions. Only then there is hope that laws will change and that they will be implemented fairly and promptly.

I always had a soft corner for the Phoolan Devis of the world. When she asked for a meeting I invited her promptly. She surprised me with her petite appearance—barely five-foot tall and 50 kilos. But the looks belied the courage and nerves of steel. I enjoyed talking to her, of the Chambal lands, the village life and horror, the ways of the political world. I had read the biography. I asked for an autographed copy. She always promised and always forgot. Always apologised, "Arre bhaiya bhool gayee". Then one day after a meeting, she went straight home and sent me the original French edition, signed in Hindi! That was a laugh. Neither of us is any good at the language. Still to me the book is a sad memento. In her spirit she was a light being. The fact is that despite her tragic life she was always bubbling with laughter, a mischievous light in her eyes. The zest and hope brimmed over.

Phoolan Devi lived only 38 years. How much sorrow, struggle, endeavour and effort was packed into this brief life. If you read the biography carefully, from age six or seven every moment was a bitter battle with life. The hunger, the regular humiliation of the father by the thanedar, the sad life of the mother, the sale-marriage and all the rest. The poor only get sorrow in large dollops. Rest Phoolan Devi, rest. I pray that the peace you were denied in this world, you will find in the beyond. Sadly, one bitter thought remains in my soul: have the Lalla Rams of the world won after all?