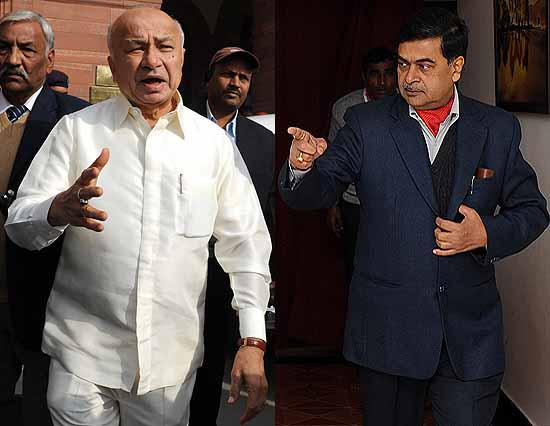 Capping a fast degenerating political discourse in the run-up to the general elections, Union home minister Sushilkumar Shinde last week found himself in the middle of an unprecedented public spat with recently retired home secretary R.K. Singh. Shinde, awkward in public at the best of times, blurted out last week that it was in fact he who was often forced to “scold” Singh for failing in his duty, when asked to comment on the latter’s claim that he had sharp differences with the minister.

Singh, an IAS officer of the Bihar cadre with a reputation for honesty as well as for being blunt and indiscreet, retaliated in kind this week, with a knock-out punch. When a TV channel caught up with him and sought his reaction to what Shinde had said, the ex-bur­eaucrat who joined the BJP last month and is expected to contest from Bihar in 2014, asserted that Shinde was unfit to be the country’s home minister and that he took an active interest in postings of SHOs in police stations of the national capital (for considerations other than administrative).

Even more sensationally, Singh alleged that Shinde had stopped the Delhi Pol­ice from interrogating a Mumbai-based businessman suspected for his involvement in the IPL spot-fixing scandal. The said businessman was believed to be close to India’s most wanted gangster, Dawood Ibrahim, he added. While Singh refused to name the businessman, Dr Subramanian Swamy of the BJP tweeted that the businessman was Shahid Usman Balwa, an accused in the 2G case who’s said to be close to Sharad Pawar (who Shinde had declared last week he would be happy to see as PM).

To be fair to Singh, he had levelled most of these allegations last month itself while talking to Outlook. But he had then insisted on keeping the damning parts “off the record” as he felt it would be inappropriate to level these allegations in public. But Shinde’s casual statement that he used to ‘scold’  him appears to have got his goat, pus­hing him to make his contempt for the home minister public.

“I did not know him well enough before he took over as home minister in August 2012. But my discomfort bec­ame acute when the then MoS for home affairs, Jitendra Singh, quickly manoeuvred to get out of the ministry and  shifted to the ministry of youth and sports as MoS with independent charge in October 2012,” Singh told Outlook.

He also asserted that the Delhi Police was a corrupt organisation and Shinde had a group of loyalists from Maha­rashtra parked at his residence, who would communicate directly with the then Delhi police commissioner Neeraj Kumar over desired postings. Kumar, he claimed, had shown him the slips (chits of paper) that he had received from the HM and had preserved them as evidence. Now retired, Kumar, possibly conscious that the allegation did not reflect well on him either, refused to respond to telephone calls and smses seeking a confirmation.

Singh, who said this week that P. Chidambaram was “100 times better” as home minister, nevertheless harboured reservations about PC too. He recalled that Chidambaram had told the media that the Jammu and Kashmir government could withdraw the Armed Forces Special Powers Act (AFSPA) as and when it so desired. “Imagine the home minister of the country being unaware that AFSPA could be lifted only by the Centre and only when initiated by the J&K governor,” Singh quipped.

He claimed Shinde was lying when the HM said the US attorney general had assured India of FBI’s help in arresting Dawood. It was ridiculous, said Singh, to suggest this because the FBI neither had the mandate nor the wherewithal to ‘arrest’ Dawood, who was believed to be living in Pakistan under ISI protection.

Singh, perhaps, has reason to feel bitter—he’s the only home secretary to not get a posting post-retirement from the UPA.

Needless to say, the public spat has left all three, namely Singh, Shinde and Neeraj Kumar, running for cover. While Kumar comes across as a weak-kneed police commissioner succumbing to pressure and unlawful orders, Singh’s own conduct has also come under intense scrutiny. Questions of propriety have been raised over bureaucrats holding sensitive posts jumping into politics soon after retirement. Congress leader Digvijay Singh questioned whe­ther it wasn’t a fact that Singh had approached the government for re-employment after his retirement, insinuating that he was levelling these allegations after being denied a sinecure. (Singh, perhaps, has reason to feel bitter—he’s the only home secretary to be denied an assignment post-retirement by the UPA.)

Sources close to Shinde have come out to suggest that the former home secretary has been ungrateful. They claim that Shinde had fended off pressure to ease out Singh after he allegedly mishandled public protests following the Delhi Nirbhaya gangrape in December 2012. He was allowed to retain a police escort and security, they pointed out, even six months after his retirement (and even after he had joined the BJP). Singh also continued to live in the plush new Moti Bagh housing complex in Delhi, meant for senior officers, till December alth­ough his request for re-employment was turned down in June.

Kiran Bedi, former IPS officer and activist,  voiced her uneasiness over the timing. Singh, she suggested, should not have kept quiet if he knew the home minister was acting against national interest. Since Singh is now a politician and in the BJP, she added, his allegations would remain suspect. Did Singh put his findings on record in writing, asked Digvijay Singh, since the allegations against Shi­nde were so serious. While Singh maintains that his differences with Shinde were known to the cabinet secretary and the PMO, he’s unable to explain why he failed to put this on record.

While the BJP has predictably deman­ded an inquiry and Shinde’s resignation if the charges are proved, Ravi Shankar Prasad, the BJP’s deputy leader in Parlia­ment, reminded TV viewers that Singh enjoyed immense credibility as a no-non­sense officer. He was the DM sent to arrest L.K. Advani and halt his rath yatra in Bihar in 1990, Prasad recalled, but such was his reputation that Singh ser­ved as joint secretary in the home ministry when Advani was home minister.

Singh had evoked outrage in 2012 by praising the Delhi Police for its “outsta­nding” performance in the quick arrest of the perpetrators in the Delhi gang­rape case.  He also stoutly fended off demands for sacking Neeraj Kumar,  following the inept handling of the protests following the incident. While former CJI J.S. Verma and the Delhi HC rapped Singh and the Delhi police on the knuckles, the home secretary ens­u­red that Kumar continued in his post till he retired  last year. While none of the parties appear keen to follow the allegations through and an inquiry is almost surely ruled out, the bizarre public spat has served to expose the underbelly of a sensitive and crucial ministry.