For Bombay cinema, it's native exotica—like adding a dash of pepper to jaded fight scenes. But a martial art genre plays along. 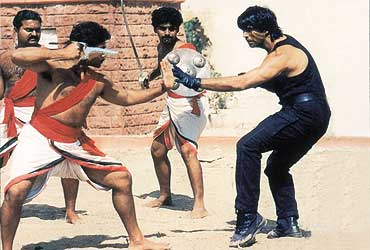 outlookindia.com
-0001-11-30T00:00:00+0553
Decked out like Rambo, Akshay Kumar bursts into view, machine-gun blazing. In a blink, he is surrounded by sinewy palace guards togged out in baggy pants and brandishing sticks and swords. Naturally, they don't stand a chance against the Bollywood action hero, but the scene from the film Lahoo Ke Do Rang has a special significance that is lost on the audience.

The palace guards are no bunch of extras in funny costumes menacingly waving plastic swords. They are real-life fighters trained in kalaripayattu, Kerala's ancient martial art. The exclusive heritage of the warrior clans of north Kerala, this fading martial arts tradition is finding celluloid resurrection on the extravagant and surreal sets of the Bombay film industry.

Bollywood's tryst with kalaripayattu possibly couldn't have come at a better time. The kalari tradition is struggling to survive in the land of its origin. A few families in north Kerala, who are the repositories of this ancient knowledge, have been keeping the tradition barely alive by opening schools and clinics. The box-office appeal of Hindi cinema is proving a source of rejuvenation for the martial art, despite its comic and frivolous manifestations on screen.

Hindi cinema's priorities, however, are clear: kalaripayattu offers novelty, stunning acrobatic visuals and a robust ethnic alternative to the jaded fight scenes that wear audiences out faster than their onscreen combatants. Filmmaker Santosh Sivan has enlisted Sunil Kumar—one among the younger generation of kalaripayattu practitioners who runs the popular cvn Kalari Centre in Kozhikode with his three brothers—and his team to handle the fight scenes of Ashoka the Great, his magnum opus in the making. For the title role, Shahrukh Khan honed his gladiatorial skills under Sunil's tutelage, learning to wield the deadly weapons in the kalari arsenal. Generous in his assessment, the kalari master says: "Shahrukh is a quick learner. His body is flexible and his movements are smooth. After a crash-course spread over three weeks in different locations, the star could block, hit, turn in the air and swing the long coiled sword known as the urumi like a true pro."

No doubt, Bombay actors bring a high level of adrenaline to the shots. Shahrukh's approval ratings soar with his mentors every time he courts injury to achieve the perfect simulation of a risky kalari manoeuvre. "As a dancer, he's pretty much a natural," notes Sathyanarayanan who, along with Sunil, oversaw the star's fight scenes in Ashoka the Great. The duo also tutored Ajay Devgan in Rajkumar Santoshi's yet-to-be-released Lajja. Both Devgan and Akshay Kumar, trained in karate, were quick to grasp the vocabulary of kalaripayattu in their action sequences.

Kalari movements are mostly adapted into song sequences by Bollywood directors who fall back on kalaripayattu as a Kerala stereotype. "If a line in a song lyric refers to Kerala and if the music has a martial tone, then they think of kalaripayattu. The director's assistant will give us a call and ask for sequences based on kalaripayattu movements," adds Sathyanarayanan, who has helped choreograph film stars in several song sequences. A single song sequence often involves a cast of 25 to 30 people, as many as it takes to "fill the screen". No expense is spared to achieve the intended visual effect. But the sequences are purely impromptu exercises in imitation. The stars simply execute the motions demanded by the dance director.None of the painstaking hours, nay years, of the process of initiation precedes the carrying out of these intricate martial art movements.

Taking kalaripayattu more seriously are modern dance enthusiasts in Europe and the US. They are attracted by the sheer physicality, the fluid body movements of the martial art. Their emphasis, however, is less on weapons and more on adapting the movements to their own dance forms. Japan's national-level sumo wrestler Kyo Kudozan, while on a four-day trip to Kerala, picked up some basic kalari moves to add to his repertoire. "It's definitely dangerous," he said after the session ended.

To be sure, kalari's association with the silver screen did not begin with the heavy-bodied action school of Hindi cinema. Quite naturally, Malayalam filmmakers have already incorporated the martial art tradition into memorable films like Oru Vadakkan Veeragatha (A Martial Ballad from the North) scripted by noted author M.T. Vasudevan Nair and performed to perfection by superstar Mammootty in the lead role as a kalari warrior. This was inspirational cinema that celebrated a revered martial art tradition and transmuted its power and majesty on to the screen.

However, Mammootty—who has managed to turn in intense, authentic performances as a kalari fighter on screen—is self-admittedly no fan of the martial art. Convinced that the job of an actor is to emote, Mammootty has little patience with roles that tax his body beyond a point. "The problem is that you've to learn the basics of kalari. So you don't know when to drop what you learned and simply act," he once remarked to Malayalam action hero Suresh Gopi on a film set.

Mammootty is unfazed by uncharitable comparisons often made between him and Mohanlal. The portly star of such kalari epics as Guru and Thacholi Varghese has a reverential approach to the ancient martial art and, unlike Mammootty, is willing to push his body through punishing training schedules. Mohanlal's crowning effort is his recent acclaimed performance as the epic hero Karna in the National School of Drama's Sanskrit stage production, Karnabharam. Eminent Malayalam dramatist Kavalam Narayana Panicker had integrated complex kalaripayattu movements into the play and was overwhelmed by Mohanlal's level of mastery acquired over a three-week training period.

Bollywood stars of course come nowhere near when it comes to impersonating a kalari fighter off-screen. All they can manage is to simulate the sword movements and hope it looks real on screen. In the usual Hindi potboiler, these stars who work out with some regularity in aircooled gyms and health clubs may look credible in stereotype fight sequences. But quite clearly, that's not enough to turn them into kalari fighters.

No wonder, not everybody is happy with Bollywood's new-found interest in the martial art as a break from its formulaic action scenes. Purists feel Hindi movies have ended up caricaturing kalaripayattu fighters, reducing them to stuntmen who serve as mere props to action heroes. They frown on scenes like the one in Lahoo Ke Do Rang and other such films in the making that show Kerala's finest martial artists engaging in slapstick action scenes. "It devalues the art form and insults a great tradition," complains a gurukal (master) who runs a kalari centre in Kannur in north Kerala.

For the moment though, the kalari fighters' inroads into Bollywood has put this struggling genre into the arclights again. This indigenous art is slowly moving out of its eclipse, and Bollywood can take some credit. But a whole sweep of history precedes the evolution of an art form, and only time will tell if kitschy Bollywood can save a hoary tradition.

At The Crack Of Dusk